Back to homepage »
Share:
A conference titled “The Croatian Defence Industry as an Export Brand“ organised by the “Jutarnji list“ daily with support from the Ministry of Defence was held in the  Hotel “Esplanade“ in Zagreb  on 5 September 2017. Alongside the representatives of firms and Croatian and international […] 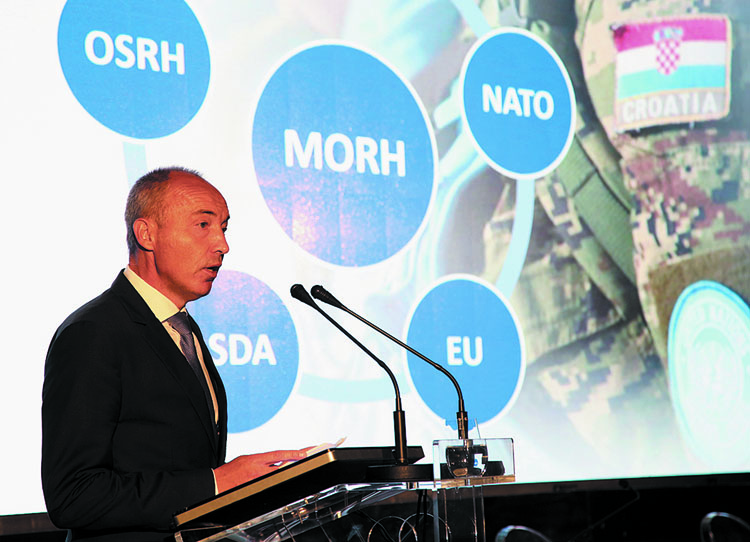 A conference titled “The Croatian Defence Industry as an Export Brand“ organised by the “Jutarnji list“ daily with support from the Ministry of Defence was held in the  Hotel “Esplanade“ in Zagreb  on 5 September 2017.
Alongside the representatives of firms and Croatian and international state, economic, military and academic institutions and experts in defence industry, the Conference was attended by the Croatian Prime Minister Andrej Plenković, the Deputy Prime Minister and Defence Minister Damir Krstičević, the Minister of the Interior Davor Božinović, the President of the Croatian Chamber of Economy Luka Burilović, the Deputy Chief of the General Staff of the Croatian Armed Forces, Lieutenant General Drago Matanović and others. The Conference featured lectures, presentations and expert panels which covered  the growth and the importance of the defence industry in Croatia for its security and society, the Armed Forces  and other defence and security institutions, the economy as a whole and the research and academic community.  The participants analysed the current situation and the potential for future development and better export balance, as well as the progress in the research and development sector and were presented the experiences from other countries and the projects related to the defence industry in the EU and NATO. The President of the Republic Kolinda Grabar-Kitarović in a video-streamed address emphasised that it was through its defence industry and the participation in peace missions and operations that Croatia contributed to the global security. The President also pledged to insist on greater  involvement of government bodies in the  development of the defence industry, which has a crucial role in the equipment of the Croatian Armed Forces and whose quality earned it a place in the international markets.  Prime Minister Andrej Plenković said the defence industry had a growing share in the exports, which have contributed  significantly to Croatia’s economic growth  and it was associated at the national level with the development of science, technology and innovations and launched a number of activities.
“The Croatian defence industry can generate greater development of the Republic of Croatia and  provide greater security of its citizens“, said the Prime Minister, who also pointed to the currently ongoing EU projects of potential interest for the Republic of Croatia in terms of financial support, research and development“.
The Deputy Prime Minister and Defence Minister Damir Krstičević stressed that the dynamic and high-tech profile Croatian defence industry was an important factor of the overall economic development, also through  promoting the innovation in the complementary industry sectors
Praising the fact that the Croatian soldiers were equipped entirely with the Croatia-made products, the Minister stated that the investment into equipment and modernisation of the defence system was a prerequisite of the development of the Croatian defence industry.
Minister Krstičević cited the example of the multi-purpose fighter aircraft as an excellent opportunity for the industry. “One of the main choice parameters concerning the fighter aircraft will be the future business and economy co-operation with the new partners, which is expected to upgrade the technology level and to promote the economy, the business of the Croatian firms and to create new jobs“.
The Ministry of Defence aims to be the key partner in the development of the defence industry, to develop new capabilities and invest into research and development“, concluded Minister Krstičević. 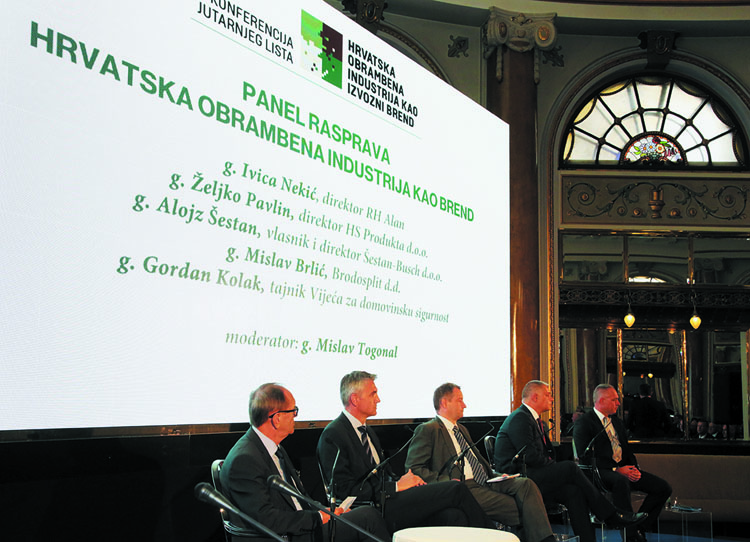 The Minister of the Interior Davor Božinović underlined that the Croatian policemen need to be well-equipped and trained to be able to provide security to Croatian citizens as well as to its visitors and tourists. The present equippedness level is high and relying on the Croatian industry (personal equipment, IT products, shipbuilding and onstruction industry, and is to introduce the rifles manufactured in Croatia. Croatia is perceived as a safe country, thanks to the joint efforts by the Ministry of  the Interior, the Croatian Armed Forces, the Firefighter Service, the Mountain Rescue Service, the medical and related services which have all widely used the equipment  made in Croatia.   The President of the Croatian Chamber of Economy Luka Burilović stated that the Croatian defence industry was a world-renowned brand, supported by the Croatian Chamber of Economy at international weapons and military equipment fairs which achieved excellent business  results. The President praised the Ministry of Defence’s co-operation with  the Croatian firms and expressed the belief that the Croatian defence industry would remain an important factor of the Croatian economic development.
The Editor-in-Chief of “Jutarnji list“ Goran Ogurlić highlighted the objectives and the fact that the HRVCON just sent off to Afghanistan was now also equipped with the Croatia-made rifle as the direct motive to organise the Conference. There is still the capacity for the growth and development  of the exports and other defence-related segments“.
The addresses were delivered by Lieutenant General (Ret.) Krešimir Ćosić, the Chairman of the Supervisory Bord of the “Alan“ Agency, Ms. Tarja Jaakkola, Deputy Director of European Synergies and Innovation of the EDA, Tim Webb, Head of Capability Delivery Section at Defence Investment at NATO, Paul Friedberg, Deputy Director of SIBAT (the Israel Ministry of Defence’s  International Defence Cooperation Directorate), Ivica Nekić, Director of the Agency “Alan“ Željko Pavlin of the “HS Produkt“, Alojz Šestan of the “Šestan-Busch“, Mislav Brlić of “Brodosplit“ and Gordan Kolak, Secretary of the National Security Council.

The defence industry is of strategic importance for any country, and the Republic of Croatia is not an exception, where the industry has seen growth of 20% annually. In the year 2016 Croatian exports of weapons and military equipment totalled ca  200 mil EUR. The exports growht is a continuous process, as evident from the comparison of 2015 figures excceeding the year 2014 by 36.8 %.

The Ministry of Defence and defence industry  – a vital  partnership
The Ministry of Defence of the Republic of Croatia is a integral segment of the defence industry and has co-operated successfully with many the domestic businesses for years. Earlier this year the MInistry signed contracts regarding the  procurement of defence equipment to meet the  needs of the Croatian Armed Forces worth 230 mil HRK (ca 31 mil EUR) ,entailing the procurement of footwear, clothing, equipment, services and works and more than 400 different items. The  contracts constitute an important contribution to the Croatian economy, particularly the segment manufacturing the military equipment and defence system-related activities. The co-operation inaugurates the Miinistry of Defence and the Croatian Armed Forces both as the customers and , more importantly, generators of development and promoters of top-quality products made in Croatia.