Back to homepage »
Share:
Croatia’s exports of the weapons and military equipment in the year 2014 totalled 1,5 thousand million kuna, equal to over 20% increase with respect to 2013, and a record figure with respect to previous years… The data of the Government Agency “Alan“ reported the total […]

Croatia’s exports of the weapons and military equipment in the year 2014 totalled 1,5 thousand million kuna, equal to over 20% increase with respect to 2013, and a record figure with respect to previous years… 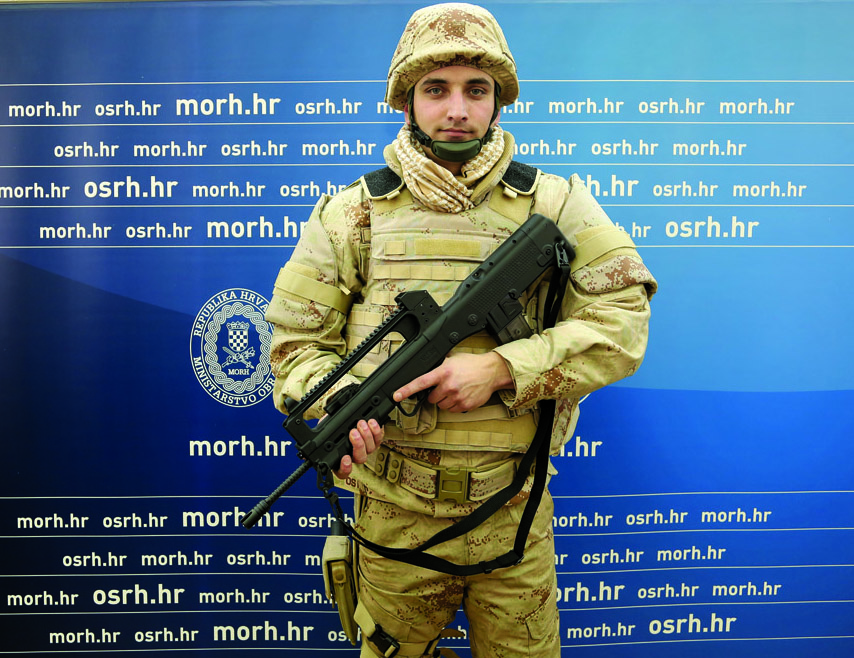 The data of the Government Agency “Alan“ reported the total worth of the Croatian export of weaponry and military equipment in 2014 cca 1,5 thousand million kuna in agreed and realised deals, which is 20% increase compared to the year 2013 and a record figure over the past period , confirming the general upward trend in the industry. The exported weapons and equipment, manufactured by some twenty Croatian companies, are the latest technology.The foremost Croatian military exporter in 2014 was the Karlovac-based HS Produkt, who sold 434,520 pistols, mostly in the United States market. Alongside the VHS assault rifle by the same manufacturer, the most important export products  comprise the DOK-ING-de-mining machines, the combat helmet by Šestan-Busch from Prelog, the RBG grenade launcher by the Pula-based M Adler D, the sniper rifles of different manufacturers, the ammunition by ATIR, the Kroko protective gear, and vessels built in Brodosplit, Tehnomont, „Greben“, Viktor Lenac“ shipyards for the armed forces and police use, as well as the  combat system instruction and maintenance services. Some of the manufacturers export directly or through private firms, and some through the Government Agency Alan, a registered export broker with as much as 30% contracted annual exports, as stated by Ivan Nekić, Alan CEO, to the markets of Australia, Azerbaijan, Bosnia and Herzegovina, the Czech Republic, Denmark, the Philippines, France, Greece, Guatemala, Iraq, Italy, South African Republic, Kazakhstan, Columbia, Kosovo, Lithuania, Hungary, Macedonia, Germany, Pakistan, Poland, Russian Federation, the United States, Saudi Arabia, Slovenia, Spain, the Sultanate of Oman, Switzerland, Tunis, Turkey, the UAE and Ukraine.

Competitive quality and price
The Croatian exports are based on new technologies and products, and are sold to reespectable buyers who value quality. For instance, the Croatia-made pistol (manufactured in millions of items) was sold to the United States and the VHS assault rifle to  Iraq.  Croatian defence industry has launched a series of products meeting the top technical standards while keeping a competitive price. While the market will offer rifles at lower price, they are of inferior quality. Croatia has offered a series of products meeting top technical standards at a competitive price.
“A good product is always a ticket to the  tender, sometimes the winning one; a domestic product is always a priority and if it meets the highest technical standards, the price is of lesser importance“, says Nekić.“It is a winning combination. The new pride of the HS Product – the VHS2 assault rifle is among the world’s best makes; another successful example are the DOK-ING de-mining machines, employed by the U.S. Army and Australian Army, and humanitarian de-mining organisations.
Likewise, Šestan-Busch exports the majority of its products to international markets. It has earned its place in the map of top European and global helmet manufacturers. According to the latest figures by the Croatian Chamber of Commerce from the recent largest defence exhibition (the IDEX 15), the firm received the order from the United Arab Emirates, Turkey, Bangladesh and some African countries for over 100,000 helmets, to engage its production capacities for the entire year.
Another successful Croatian exporter is the Adria-Mar, a vessel manufacturer, among whose customers is the Libyan Navy, has recently made contract to overhaul their four patrol vessels.
A major Croatian military equipment manufacturers is Đuro Đaković Holding from Slavonski Brod, which recently struck strategic partnership with the Finnish Patria and Norwegian Konsberg for the Middle East market.
Furthermore, Kroko, an authority in military and protective gear, the Inkop, Jelen and Viko as boot manufacturers are building their reputation in the demanding international market, and achieving better business results.
Among 25 world’s largest military equipment exporters
The aforelisted manufacturers have placed Croatia among therestricted number of countries offering quality products. Although economically and technologically inferior to more powerful countries such as the United States, Germany, France, the United Kingdom or Russia, Croatia remains among the circle of 30 countries whose original products easily find customers.  Croatian brands are found in some 40 countries, which classifies it among the 25 world’s largest military equipment exporters.
In order to maintain or increase the existing positive trend, manufacturing should be expanded and new products and technologies developed, where the support from the government is necessary, in terms of ensuring business friendlier legislative and administrative solutions, and a more supportive environment. „Without the support from the leadership of the Ministry of Defence and of the Ministry of the Interior it wouldn’t have been possible to get where we are now “.  Defence and military industry are not subsidised, and in the market they rely on their own capacities and resources.
In defence industry, the deals realised through government-supported agencies are essential, because being listed as domestic armed forces and police’s provider can sometimes be the decisive trade factor. This is proved by the contract signed recently by the Ministry of Defence of the Republic of Croatia and 22 domestic manufacturers of military footwear, gear and equipment for the use by the Croatian Armed Forces, worth cca 50 mil kuna (6.5 mil EUR).  The project of equipping and arming the Croatian soldiers entirely with the Croatia-made products is the definite proof of the Ministry of Defence’s policy to support and strenghthen the Croatian industry and value their expert knowledge and quality. It is also an additional certificate for their future exports.

Defence exhibitions
The appearance in the international market is correlated with the presence in the specialised exhibitions. They are a convenient opportunity to display one’s products, make contacts and get acquainted with the latest trends in military industry. The top international exhibitions, such as Abu Dhabi, Paris or London, gather all relevant exhibitors – designers, manufacturers or customers – and are the right venue to showcase the industry’s latest developments and innovations and manage business contacts. Croatian manufacturers participate as exhibitors too, supported by the Agency Alan, who takes responsibility to present all srelevant Croatian manufacturers and provide them with the resources and know-how necessary to participate at the exhibitions.„The Agency Alan’s Catalogue contains all products and technologies available in Croatia, allowing the visitors of the Agency’s stand to obtain all necessary information.The exhibitions are seldom the agreement-signing occasions, though, except to wrap up the previously agreed deals. The agreements and contracts are a result of lengthy work, testing, selection and other procedures, says Nekić. Procurement of arms is a years-long planning process, implying the respective procurement and funding plans. This year’s IDEX has been very successful for the Croatian industry, as the Agency’s representatives agreed new and finishing deals worth cca 100 mil kuna.

Although arms and equipment manufacturers do business autonomously or through private export brokers, a significant deal of customers prefer working through government agencies as the best guarantor. “Customers are interested in doing the business safely, and very often, when large projects are involved, they will ask for the best guarantee, which the government is“, says Nekić.
Large manufacturers, mostly renowned multinational companies who trade thousands of millions annually may be a sufficient self-guarantor; without the well-rooted position or government guarantee it is almost impossible to strike deals for sophisticated and costly equipment“.
A highly important criterion in arms trade is the international status of the customer and end user, the responsibility in this business does not end with the delivery, but involves an entire chain of subjects and entails extensive co-ordination and consultation with strategic partners.
In conclusion, the year 2015 offers extensive opportunities for all subjects determined to invest into the quality of products or modernised capacities. They merit incentives and support to justify and maintain the position in the domestic and international markets.

The Government Agency Alan made third consecutive appearance at the IDEX Exercise and Conference that took place in Abu Dhabi from 22 to 26 February 2015 presenting the HS Produkt and Inkop. Croatia was also represented by Šestan Busch and DOK-ING.
IDEX is the sole defence exhibition taking place in the MENA (the Middle East and North Africa) biennially, presenting the state-of-the-art military and defence industry intended for army, navy and air force alike. Sponsored by His Highness Sheikh Khalif Bin Zayed Al Nahyan, President of the UAE and Supreme Commander of the UAE Armed Forces, IDEX is a unique platform to establish and nurture the co-operation with the government, companies and armed forces’ representatives from all over the world. It features a series of extra events, such as the NAVDEX, live demonstrations,  helicopter and the UAV fora, and the Gulf  Defence Conference.
With over 2,800 exhibitors from 59 countries, who showcased at a surface of cca 133,000 m2 and over 80,000 visitors, the IDEX holds its place on the map of the most important events of the kind, with a significant contribution of the Croatian firms, with growing prominence and demand as defence manufacturer.