Back to homepage »
Share:
“The training conducted by the centre’s instructors will be incredibly taxing and challenging; success is guaranteed only if you persist and work hard. Nothing is more important than that. The training here is not for the fainthearted, but for those who want more than what they get from their everyday assignments and responsibilities,” said the Commander of the newly-constituted Marko Babić Leadership Development Centre Lt. Col. Tomislav Kasumović 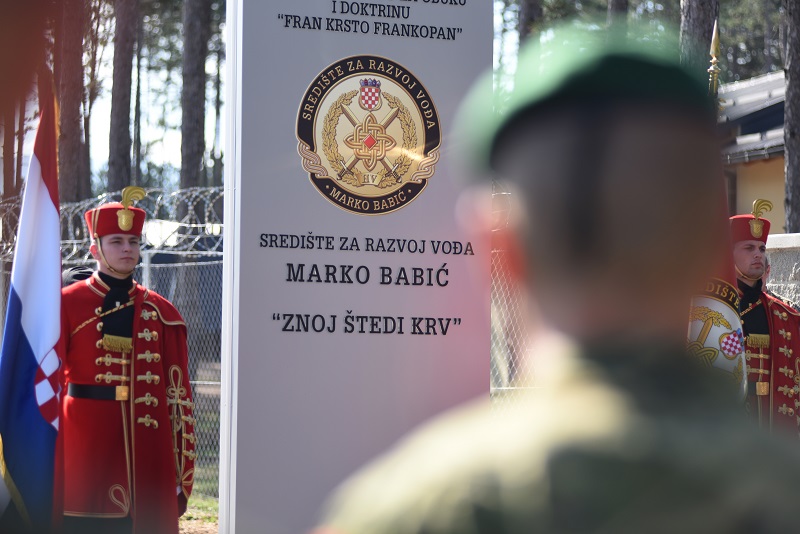 A new era in the training of the Croatian Armed Forces’ officers and NCOs has dawned: after months-long preparations, the newly-constituted Marko Babić Leadership Development Centre was opened in the hill town of Udbina on 13th September. Based on the experiences from Croatia’s Homeland War of Independence (1991-95) and the standards developed since, the centre aims to develop highly motivated, skilled and competent leaders at the lower tactical level while taking into account new needs and challenges in the Croatian Armed Forces.

The Marko Babić Leadership Development Centre was constituted at the initiative of Deputy Prime Minister and the Minister of Defence Damir Krstičević. It is modelled after the former Damir Tomljanović Gavran Guards Brigades’ Specialist NCO Training Centre (1994-2000), which was developed by Lt. Gen. (Ret.) Ante Gotovina.

The opening ceremony was attended by the President of the Republic of Croatia and the Commander-in-Chief of the Croatian Armed Forces Kolinda Grabar-Kitarović, the Minister of Defence Damir Krstičević, the Chief of the General Staff of the Croatian Armed Forces General Mirko Šundov, special advisors to the minister of defence Ante Gotovina and Božo Kožul, Marko Babić and Damir Tomljanović Gavran’s families as well as numerous other civilian and military dignitaries. The guests were also greeted by former graduates of the Guards Brigades’ Specialist NCO Training Centre at Šepurine.

In her address, President Kolinda Grabar-Kitarović recalled the heroes and leaders of the Homeland War who defined the difference between excellence and averageness, victory and defeat.

“Today’s opening of the Marko Babić Leadership Development Centre is yet another testament to the fact that Croatia and its armed forces will never deny the memory of the brightest period in their history,” Grabar-Kitarović said, adding that training was a never-ending process, while the constitution of the centre was a part of the Croatian Armed Forces’ continued expansion.

“Today, we are proud to say that we have strong, renewed Croatian Armed Forces who do not give up and are always ready to carry out every task assigned to them,” concluded Minister Krstičević.

The chief of the General Staff of the Croatian Armed Forces credited Marko Babić, the Homeland War Hero from Vukovar after whom the centre is named, for showing by example what a leader should be like, which was the reason for naming the centre after him.

“In training at the centre, the emphasis will be laid on skills that must adorn every leader: critical thinking, problem solving, adaptability, creativity, resistance, resourcefulness and flexibility. The course is designed to develop a leader’s character as a commander and instructor. All the sweat that will go into the training at this centre is insignificant in comparison with the value of a single drop of human blood. That is why the centre’s motto – Sweat spares blood – is an appropriate one. This motto was the guiding principle in the training of Croatian warriors during the Homeland War,” said General Šundov. 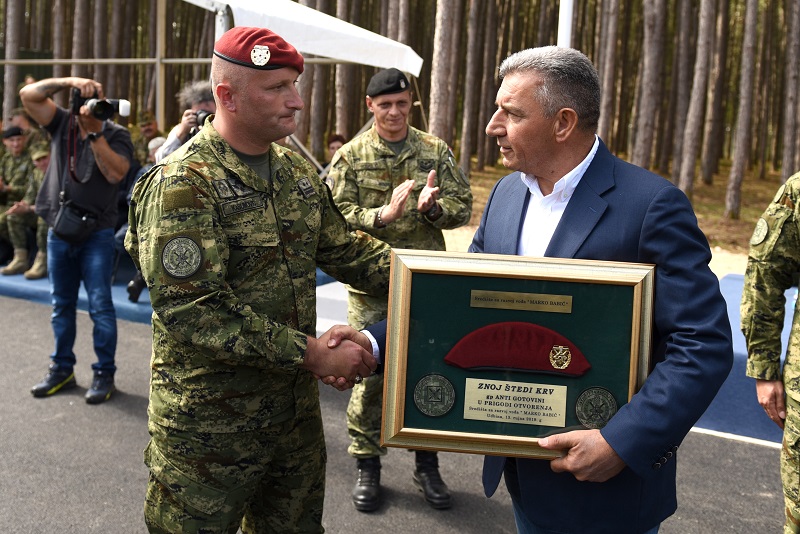 Recalling the Homeland War, Lt. Gen. (Ret.) Ante Gotovina said that the Croatian Armed Forces’ centre at Šepurine had been of crucial importance for the development of soldiers capable of carrying out combat tasks assigned to them and returning home safely. “The purpose of this centre is for officers and NCOs to develop into top-notch commanders. They will define how capable and ready the Croatian Armed Forces are,” said General Gotovina.

Lt. Col. Tomislav Kasumović stressed that the constitution of the centre marked the dawn of a new era in the training of the Croatian Armed Forces’ officers and NCOs. Simultaneously, the Croatian Armed Forces had gained a new capability based exclusively on hard work and discipline. While complimenting sixty trainees who would begin their intensive six-week training the next day, Lt. Col. Kasumović said: “The training conducted by the centre’s instructors will be incredibly taxing and challenging; success is guaranteed only if you persist and work hard. Nothing is more important than that. The training here is not for fainthearted, but for those who want more than what they get in their everyday assignment and responsibilities. During your stay here, you will be faced with challenges that will call for readiness and persistence. Nevertheless, I am sure that you will overcome those challenges and complete your training successfully. I wish you much success and much strength in what lies ahead so that you may push the frontiers and become better leaders.”

What lay ahead of the inaugural class of trainees was 34 days of exacting training that would culminate in a march to the city of Knin in Dalmatian hinterland – the symbol of victory in the Homeland War. The objective of the new training system at the Leadership Development Centre is the development of combat skills, leadership abilities as well as mental and physical endurance. The leaders trained there will pass their newly-acquired competencies and motivation onto their units. At the same time, they will help increase the overall readiness of the Croatian Armed Forces with their knowledge and skills. Special emphasis during the training will be placed on an individual’s performance in difficult, stressful situations, with the development of a leader’s character as a commander and instructor being adorned by the motto Sweat spares blood. The centre is named after Lt. Col. Marko Babić, Homeland War hero from Vukovar and deputy commander of the 3rd Battalion, 204th Brigade, which was commanded by the legendary Blago Zadro. After Zadro was killed in action during the defence of the Borovo Naselje neighbouhood in Vukovar, Marko Babić took over as commanding officer. He and his fellow fighters successfully destroyed enemy tanks on the Trpinj Road (dubbed Tank Graveyard) and warded off the Yugoslav People’s Army’s attacks until the last day of the Battle of Vukovar.

During the ceremony, a memorial room dedicated to Homeland War hero Marko Babić was opened, while the centre’s instructors received their graduation certificates and badges.

On the occasion, Lt. Gen. Ante Gotovina received a framed beret as a symbolic present, while the Babić family were gifted the emblem of the newly-constituted centre. Marko Babić’s siblings Kata Lozančić and Ivan Babić unveiled the centre’s landmark.

The guests also toured the centre’s command, the Velebno off-post housing and static display of the equipment that will be employed in the training at the Leadership Development Centre. The centre’s personnel, the Croatian Air Force, the Special Forces Command and the Military Police Regiment performed demonstration exercises.