Back to homepage »
Share:
The live - fire Exercise “Patria 18“ -  the main training event of the Guards Mechanised Brigade in the current year - was conducted in the Training Range "Crvena zemlja“ near Knin" on 8 June 2018 . 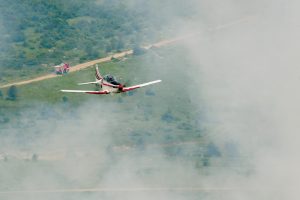 The first phase commenced with an aerial raid  by Pilatus PC-9 aircraft against the enemy forces and the  after which the artillery assumed the attack using M-69 mortars. the infantry aboard the Patria vehicles gradually approached the line of contact . In the second phase the reinforced anti-tank platoon, which destroyed the fortified enemy positions joined the manoueuvre force. In the meantime  a group of soldiers detached to seize the positions on a nearby hill and provide fire support. The culmination point of the Exercise was the arrival of the Patria vehicles. Having  neutralised the enemy minefields the home forces secured a passage for the infantry. The enemy forces responded to the artillery attack, which was countered by a smoke screen to protect the infantry during the egress from the vehicle and approach to the enemy positions. In the third and final phase the infantry made forced entry into the enemy’s facility, took control of it and forced the enemy soldiers out. The Exercise and the mission were completed by the flypast by a Pilatus PC-9. 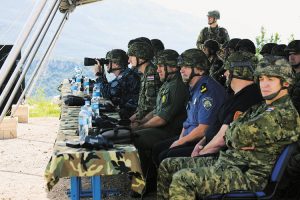 The participants and observers agreed that the Exercise proved efficient joint operation of all forces. The Commander of the Guards Mechanised Brigade and the Exercise Director, Brigadier General Tihomir Kundid said:  “You have displayed impeccable trainedness and preparedness, as well as tactical maturity, strength and high level combat efficiency. The exercise was tactically excellent and fully consistent with the principles of the use of mechanised units. The conduct of the Exercise and the observed level of trainedness of the Croatian Army and of the Croatian Air Force were commended by the Director of the General Staff of the Croatian Armed Forces Vice Admiral Robert Hranj, acting as Envoy of the Deputy Prime Minister and Defence Minister and of the Chief of the General Staff to the Exercise.