Back to homepage »
Share:
After nearly 18 years, the tradition of assigning red berets with “Pauci“ insignia to the young members is back; the first revived ceremony was held in the Barracks “Dračevac“ in Split 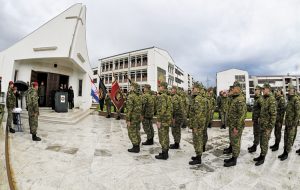 After nearly 18 years, the tradition of assigning red berets with “Pauci“ insignia to the young members is back; the first revived ceremony was held in the Barracks “Dračevac“ in Split, which once housed the 4th Guards Brigade. The tradition is continued by the successor unit – the 3rd Mechanised Battalion “Pauci“ (“Spiders“) of the Guards Mechanised Brigade. The mural on a building still bears the insignia of the legendary wartime Brigade, and the chapel of Sv. Križ (Saint Cross), guarding the memory of 199 members fallen during  the Homeland War; their photos, names and dates of birth and death are kept on small plaques hanging on the walls. Today, standing close to the chapel we see some 70 servicemen – active members of the  Battalion “Pauci“ with the recognisable red berets and twenty young men and women wearing the standard Croatian Armed Forces’ headwear, waiting to receive the merited berets. Attending the ceremony were the members of the Association of Veterans of the 4th Guards Btigade and the relatives of the new Brigade members; Anđelko Čavlina, who received his beret at the same place during the war (in 1993), witnessed to the ceremony for his son Marko. Named after one of Anđelko’s three brothers with him in the Brigade too, who lost his life in 1992 and whose photo is displayed in the Chapel. “My son is my and my late brother’s pride. I had to be here today. I was proud when he told me of his wish to join the Brigade, before enrolling for the voluntary service; when I saw him on the oath-taking ceremony, I was deeply touched; and happy to see that he was among the best trainees. There is nothing more to tell him but to stay as he is now“. 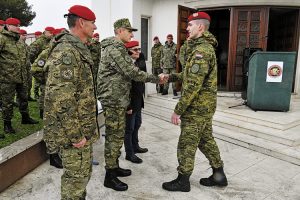 We observed the dress rehearsal for the ceremony; the Battalion Comman Sergeant, 1st Sergeant Željko Bilandžić straightened the line and incites them to speak louder; we spoke to Pvt. Marko Čavlina during the pause: “I sure wanted to be a part of the same unit as my father and my uncles and my wish has come true. Our Battalion is the true successor of the 4th Guards  Brigade. I am a bit nervous, this is a big moment for me. I am committed to develop my abilities as soldier, take part in exercises and missions“, said Marko. The Battalion Command Sergeant, Major, 1St Sergeant Željko Bilandžić says: The ceremon has been revived after long time and at the same place. The berets will be handed in to the graduates of the 29th Camp for active military service, who have been in the Battalion for three months and completed various training courses. The inauguration ceremony commenced with the mass for the fallen members of the Brigade, served in the Chapel by the military chaplain. Fr. Ilija Mikulić, and the war history of the Brigade was recited.  Before receiving their berets the new young members paid tribute in the chapel to the fallen combatants, and were congratulated by the Commander of the Guards Mechanised Brigade, Brigadier General Tihomir Kundid, the Commander of the Battalion “Pauci“ Major Samir Mršić and the Chairman of the Association of Veterans Hrvoje Pupić Vurilj, who handed them the berets . 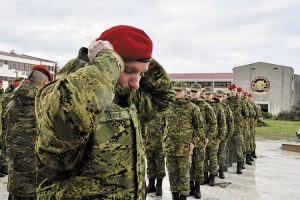 The Commander of the Guards Mechanised Brigade stressed that the soldiers wearing red berets promoted its name and values. “Serving your military and the homeland is a supreme honour; your duty is to be trained  and competent, to repay your predecessors and indebt your successors“. Major Samir Mršić reminded of the symbolic value of the chapel, the tradition and demanding selection procedure to earn the beret. The award of the berets was followed by a loud oath taking, and the Croatian Armed Forces got new members of the Battalion “Pauk“. “I feel honoured and proud; seeing the present and former members of the Brigade, and especially seeing the photos of the 199 fallen members who wore this same beret.  Coming from a place near Split it was understandable for me to serve in “Pauci“; I am motivated to fulfill the tasks I receive, and we’ll see what comes later“, said Pvt Stjepan Radan. The Battalion Command Sergeant Major Željko Bilandžić is a link joining two  periods in the history of the “Pauci“. During the Homeland War he was a scout.

The Brigade’s coat of arms is of huge importance to him: “We have lost too many fellow combatants wearing the beret, it  is sacred to us“. The red beret gives the the soldiers the sense of belonging to the unit that is the heir of the 4th Guards Brigade. The fallen members, whose photos you see in the memorial chapel, were of the same age as these young people here today. What we want to show them is that their that the people of their age laid down their lives for Croatia and that they could equal them by commiting fully to their profession“.