Back to homepage »
Share:
All members of the PzH 2000 Howitzer – one of the most powerful weapons in the military arsenal of the Croatian Armed  Forces - unanimously praise the Howitzer as “powerful, modern and highly effective“ 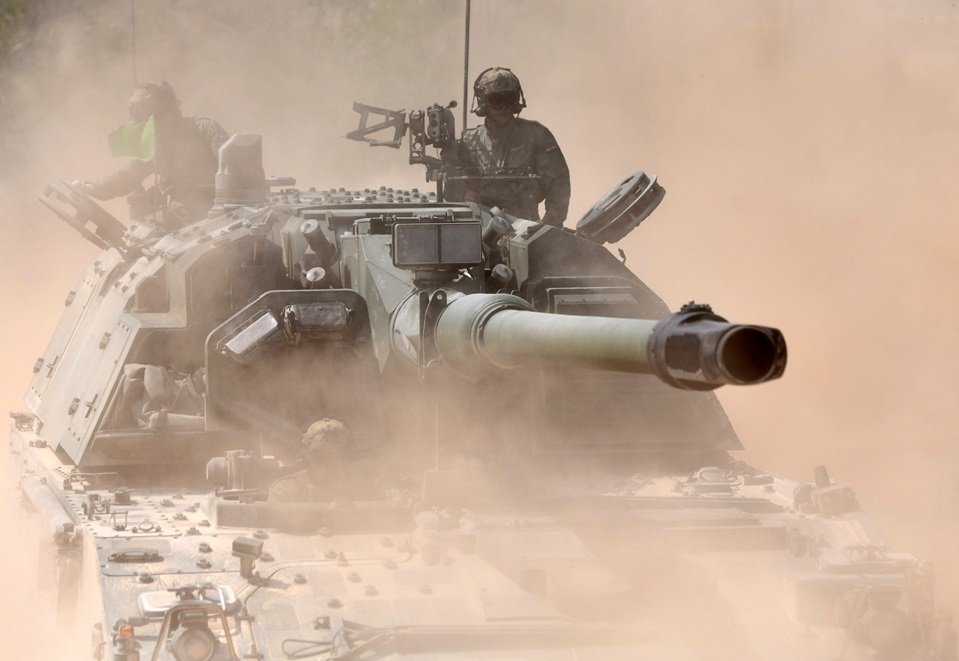 The self-propelled PzH 2000 Howitzer is considered to be the most powerful tool in the arsenal of the Croatian Army. The “Hrvatski vojnik“ magazine team visited a PzH Howitzer crew of the Artillery and Missile Regiment based in the Barracks “Bilogora“ in Bjelovar.

All members of the PzH 2000 Howitzer – one of the most powerful weapons in the military arsenal of the Croatian Armed  Forces – unanimously praise the Howitzer as “powerful, modern and highly effective“.

Since its introduction into the Croatian Armed Forces, pursuant to the Agreement with the Federal Ministry of Defence of Germany the PzH 2000 have been considered the most powerful weapon used by the Croatian Army. Rightly so, as it engages targets with six shells at 40 km under various angles, at the rate of 10 – 12 rounds per minute.

The “Hrvatski vojnik“ magazine team visited a Panzer Howitzer 2000 crew at the base of the Artillery and Missile Regiment in the Barracks “Bilogora“ in Bjelovar to which it belongs to report on the functions and missions of the state-of-the-art asset of the Croatian Armed Forces.

The 5-member crew is composed of  a commander, a gunner, two loaders and a driver,  each assigned with a different task within the vehicle.

“The Panzer howitzer 2000 is the world-recognised state- of-the-art artillery system. The main armament fitted is the 155- mm gun. The Howitzer is characterised by rapid firing and mobility and optimal crew protection”, says 1st Lieutenant Janko Anić, the  Commander of the Howitzer.

“The Howitzer runs at speed of 60 km/h; the weight is 55 t and a total of 60 projectiles are stowed in the magazine. The upgraded NATO ammunition allows it to engage targets at distances up to 40 km,while the standard ammunition and the smart ammunition allow firing at 30 km and 80 km respectively”, says  the Commander.

After he takes the command post, the crew  receives a firing task, and the commander explains its elements to them, primarily the Loader 1, and the gunner, who is a deputy commander.

The Loader 1 – Corporal Ivankić – has been in the unit for over two years as one of its first members.
“I am responsible for post-firing checks, ammunition resupply and malfunction resolving”, explains Cpl Ivankić, who says he was delighted to be a part of the Howitzer crew, operating the most modern weapons in the Croatian Armed Forces.

The rear armoured part of the vehicle houses the commander, the gunner and two loaders – Pvt Rotim as Loader 1, assigned to the Battery from its establishment, alongside Cpl Ivankić.

The turret and main armament

“My task is to prepare the projectiles before firing ,and to check pressures and assist the loaders during the fast firing. When in the engagement area, I secure the Howitzer as I am the only armed crew member, operating the machine gun on the turret which has a 360-degree field of fire“, says Pvt. Rotim. Right behind him is the seat for Loader 2 – Private Josip Weber.

“I have always been interested in artillery, and I chose the specialty during my term as a  recruit. As Loader 2 I am tasked with propellant preparation and ammunition handling as necessary“, says Pvt Veber.

The driver sits in the right front whereas the crew occupy the seats in the rear part of the  vehicle, with the turret and the main armament, fire control and navigation systems.

The driver is Private Krunoslav Orlović, assigned after the completion of a 6-week training. The PzH 2000 driver is responsible for suspension, caterpillar, engine and fluid level checking and error checking during the ride, prior to and after the mission.

”I was assigned to the Self-propelled Howitzer Battalion, which gave me a unique opportunity to operate a 1000-hp. The Howitzers may seem complicated and powerful, but I quickly adapted to it“, said Pvt Orlović.

The Howitzer properties (the hull length 7.87 and with gun forward is 11.7 m, the  width 3.5 m, the height 3.46 m and weight 55 t) require respectable operating skills. A total of 16 howitzers have been introduced into the Croatian Armed Forces, and 12 are in the operational use.

The Commander of the 1st Battery of the Self-Propelled 155-mm Howitzer Battalion 1st Lieutenant  Mihael Lach has been tasked with the Howitzers since their arrival and  attended a training in the country of origin. The Battery underwent eight shooting and evaluation events and took part in five exercises.

“The Howitzers were delivered to Croatia in 2017, and were presented to the Defence Minister at the Exercise “Kuna 18“ in 2018. They were subsequently deployed at the Exercise “Velebit“ in October 2018, and in “Immediate Response“, in “Puma“ and in “Udar“exercises in 2019. This year our Battery will take part in the exercises “Spremnost“ and “Udar 20“, said  1st Lt. Lach.