Back to homepage »
Share:
“Just like your predecessors, you raised the criteria of excellence to a new level,” Vice admiral Hranj told the members of the ninth Croatian contingent upon their return from Afghanistan 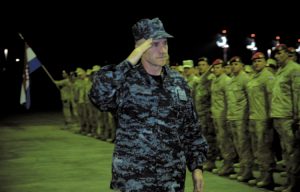 The members of the 9th Croatian contingent in NATO’s mission Resolute Support returned from Afghanistan on 16th March.

Upon the arrival of the 9th Croatian Contingent, its Commander Colonel Dražen Ressler reported to Vice admiral Robert Hranj, who thanked the members of the contingent for carrying out their tasks with success and representing their homeland with dignity. He also wished them the best of luck in their personal and professional lives. “Just like your predecessors, you raised the criteria of excellence to a new level,” Vice admiral Hranj said.

Colonel Ressler also thanked the members of the contingent for professionally executing their tasks and said that he was pleased that they had returned to their homeland safely.

On the occasion of their return, the members of the 9th Croatian contingent received awards and commendations from Vice admiral Hranj.