Back to homepage »
Share:
“The Armed Forces may have its  military side – tanks, guns and aircraft, but it also has the culture side, which we represent“, says  Captain Davor Dropuljić, director of the  Jazz Band, which has become a synonym  for great music and fun.  The term […]

“The Armed Forces may have its  military side – tanks, guns and aircraft, but it also has the culture side, which we represent“, says  Captain Davor Dropuljić, director of the  Jazz Band, which has become a synonym  for great music and fun.

The term “military music“ is most often associated with brass bands and marches. The truth is different though – military music is a broad concept, as demonstrated by the versatile Croatian Armed Forces Orchestra.

The Orchestra components cultivate various styles, ranging from the classical music, klapa multipart singing, marches and soon the tamburicza music as well. The components themselves are capable of performing various genres . We are portraying it through Glenn Miller, the world’s most famous link between  military music and jazz, the American trombonist , the leader of a big band and a composer of the immortal “Moonlight Serenade“.

In the world war II Glenn Miller was commissioned in the Army and formed and became a conductor of the Glenn Miller Army Air Force Band, touring the United States and entertained the American troops live and broadcast over radio.

At the time the European countries saw liberation Major Glenn Miller and his Band went to the United Kingdom, and unfortunately disappeared on a flight over the English Channel  in December 1944. He is considered a reformer of military music, who replaced the classical marches with jazz.

The Jazz Band of the Croatian Armed Forces Orchestra is certainly one of its best ambassadors with the civilian community and  play the pieces by Glenn Miller.  It might come as a surprise that the Band was established as early as in February 1996, four months after the Orchestra itself. Miljenko Prohaska, conductor and one of the greatest names of jazz in Croatia, established the military Big Band, half manned by the members of the Armed Forces Orchestra and half by the members of the Croatian Radio Television  Big Band.  It was sometimes hard to gather the members and schedule performances, as was also with the band established in 2002, directed by Ladislav Fidri, and the two did not perform long. 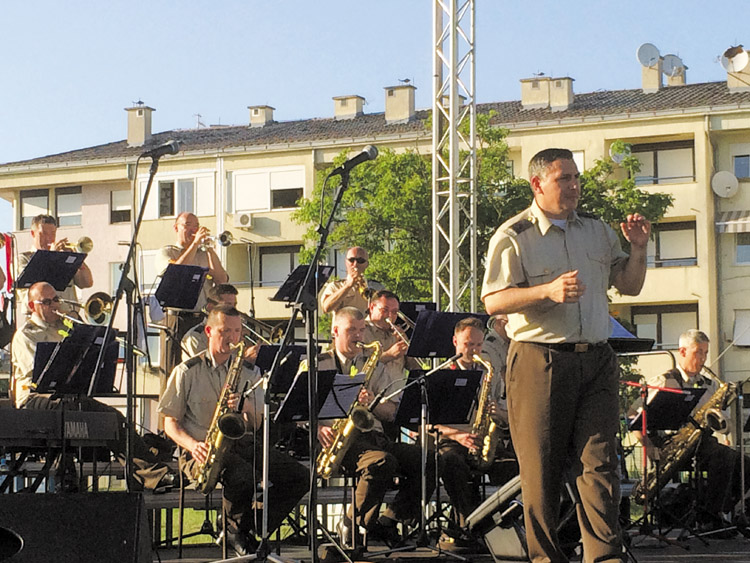 The current Band, formed in autumn 2013 had much better prospects. As a crucial precondition, it is entirely  manned by the members of the Croatian Armed Forces.  The initiative came from the three members  of the Band – Captain Andrej Henigman, Captain Vanja Ileković and Captain Davor Dropuljić, the director and our interlocutor.

“The Jazz Band is here to stay, I hope after we retire. We play quality swing music to dance and to listen to“, says Cpt Dropuljić quickly and with enthousiasm,as a passionate fan and not the conductor of the Band.

The Big Band does play American music with a Croatian touch, visible also in the uniforms worn by the members. They play concerts mostly in the Dom HV “Zvonimir“ hall, in Zagreb, but often visit other towns in Croatia, and during summers they also perform at open air concerts  in Osijek,  Metković, Marija Bistrica, Zadar, Imotski to name some.

“We gladly perform wherever we are invited to. We love to be around as much s possible, and to present the Band and the Croatian Armed Forces. They may have the “military side“ – tanks, guns and aircraft, but it also has the culture side, which we represent.

Alongside the pieces by Glenn Miller, or the ones played by Count Basie, Duke Ellington, Buddy Rich or Harry James bands, the Jazz Band of the Croatian Armed Forces Orchestra often plays rearranged  popular  Croatian songs , such as “Tvoja zemlja”, “Bože, čuvaj Hrvatsku”, “Pismo ćali”, “Gdje je nestao čovjek?”,the  hits of Massimo Savić…  Each of 15 members has his own favourite pieces, but they all love to play “Sweet Georgia Brown”,and  “You Can Leave Your Hat On” the most. The performances  by renowned guest vocalists (Marko Tolj, Jacques  Houdek, Nina Kraljić, Ivana Kindl, Renata Sabljak, Adalbert Turner-Juci, Ervin Baučić)have  added to the whole experience.

“I remember the “Zvonimir“ concert hall was half full, and the rest is history. Now the tickets for our performances are sold a fortnight earlier“, says Dropuljić laughing.

The Band members wish to record an album dedicated to the unforgettable Frank Sinatra and one with the Croatian songs.

“Our job is to play and enrich our repertoire; we all love jazz. I am highly proud of every member of the Band. It feels great to stand in front of them and enjoy playing our pieces. The symbiosis is evident at our concerts, which emit such positive vibes“, says Cpt.  Dropuljić.