Back to homepage »
Share:
Wings of Storm celebrated the success of their 200th display at the 93rd Air Base in the village of Zemunik Donji near Zadar. Surrounded by guns and a celebration cake, the display team’s pilots received congratulations for their achievements in the past 14 years from their colleagues and guests, led by the Minister of Defence Damir Krstičević 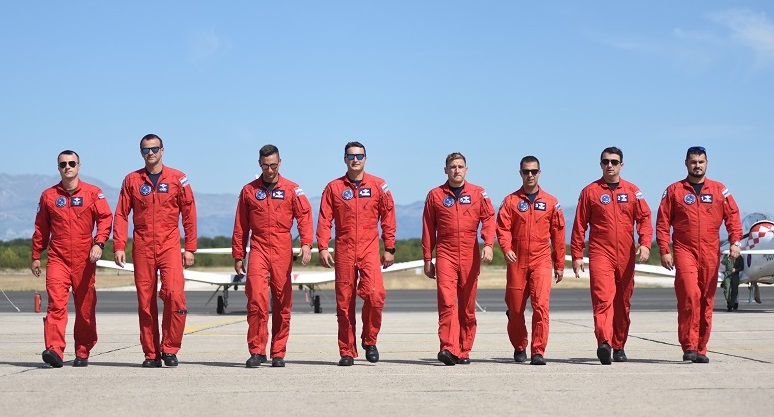 In just two weeks, the Croatian Air Force Display Team Wings of Storm ended the journey to their jubilean 200th display in the best way imaginable.

It all began with the display team’s performance at AirPower, one of the world’s most renowned air shows, at Zeltweg Air Base, Austria. It was the team’s fourth time taking part in that air show and their fifth air show in Austria overall, which elevates the country above other 14 countries where the team have performed so far.

After performing a display in a mountain pass in Mollis, Switzerland at the end of August, the team thought that the traditionally demanding terrain around Zeltweg Air Base would be ideal for performing the full display. However, the (bad) weather made sure that things did not go quite as smoothly. The unsettled weather on the first day of the air show was just barely good for the Wings of Storm to perform the full display, but luck was not on the team’s or spectators’ side on the second day. The low cloud base forced the team to perform the rolling display, which was good enough for them to demonstrate some of their skills, but not their full arsenal. The spectators’ patience and determination was truly a marvel. Although it rained non-stop, they gathered in large numbers to welcome Wings of Storm, who were among the last groups to perform that day. 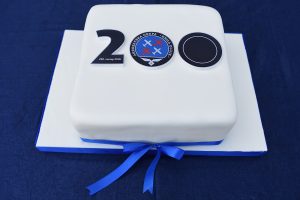 After AirPower, Wings of Storm took some time to put into action the long-standing idea of flying with Deputy Prime Minister and the Minister of Defence Damir Krstičević. During a thirty-minute flight in the position of the slot, Minister Krstičević had a chance to experience several of the display team’s aerobatic manoeuvres (loops and rolls), including the triple mirror, for which the team are famous for. Beside Minister Krstičević, the Commander of the Croatian Air Force Brigadier General Mato Mikić also joined the display team’s pilots for the flight.

The next morning, the team flew off on their third guest appearance in Belgium. This time, they took part in the Sanicole Airshow, a civilian/military air show which has been held annually for the last 41 years. All military participants were accommodated at Kleine-Brogel Air Base, while the air show itself took place at an airfield five miles away.

For the third time this season, Wings of Storm found themselves at the same air show as the Swiss display team Patrouille Suisse and the Breitling Jet Team. Those two teams surprised the spectators with a joint overflight which symbolically the end of Swiss watchmaker Breitling’s sponsorship of the renowned civilian display team. 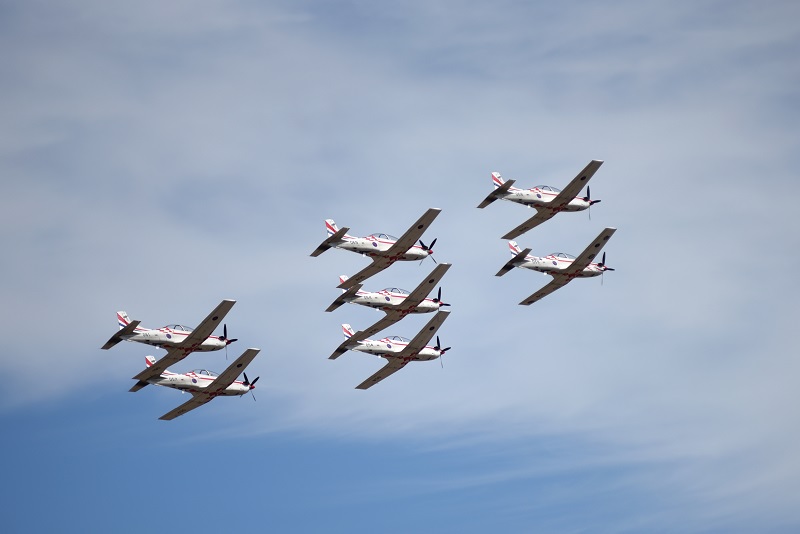 Tens of thousands of spectators were particularly drawn to a display by Ukraine’s Sukhoi Su-27 aircraft. Though the display was performed carefully, the sight of the aircraft alone was impressive. The ideal weather allowed Wings of Storm to perform their full display and thus present themselves to the Belgian audience to the best of their abilities. Although the Croatian display team’s biggest fans are their fellow pilots, who understand how exacting their manoeuvres are, their display was also well received by the numerous spectators and VIP guests at Sanicole Airshow 2019, including Josip Paro, Ambassador Extraordinary and Plenipotentiary of the Republic of Croatia to the Kingdom of Belgium. Wings of Storm will also remember that air show for an interesting, emotional meeting with the Brazilian air display team Esquadrilha da Fumaça, from whom Wings of Storm drew inspiration in their early years.

The success of the jubilean 200th display had to be celebrated and the personnel at 93rd Air Base in the village of Zemunik Donji near Zadar made sure that it was. Surrounded by guns and a celebration cake, the display team’s pilots received congratulations for their achievements in the past 14 years from their colleagues and guests, led by the Minister of Defence Damir Krstičević. By taking part in the aforementioned air shows, Wings of Storm closed the book on performing at international air shows this year. Still ahead of them are displays at some minor manifestations in Croatia and the training of new members. The team’s goal is to enter 2020 fully manned and prepared for the 15th anniversary of their début as well as the first edition of the Croatian International Military Air Show. The arrival of the world’s most renowned air display teams (Frecce Tricolori, Red Arrows and Patrouille de France) at CROIMAS 2020 speaks volumes about Croatian display team’s reputation in the world and is a fantastic announcement for the manifestation in Zadar.