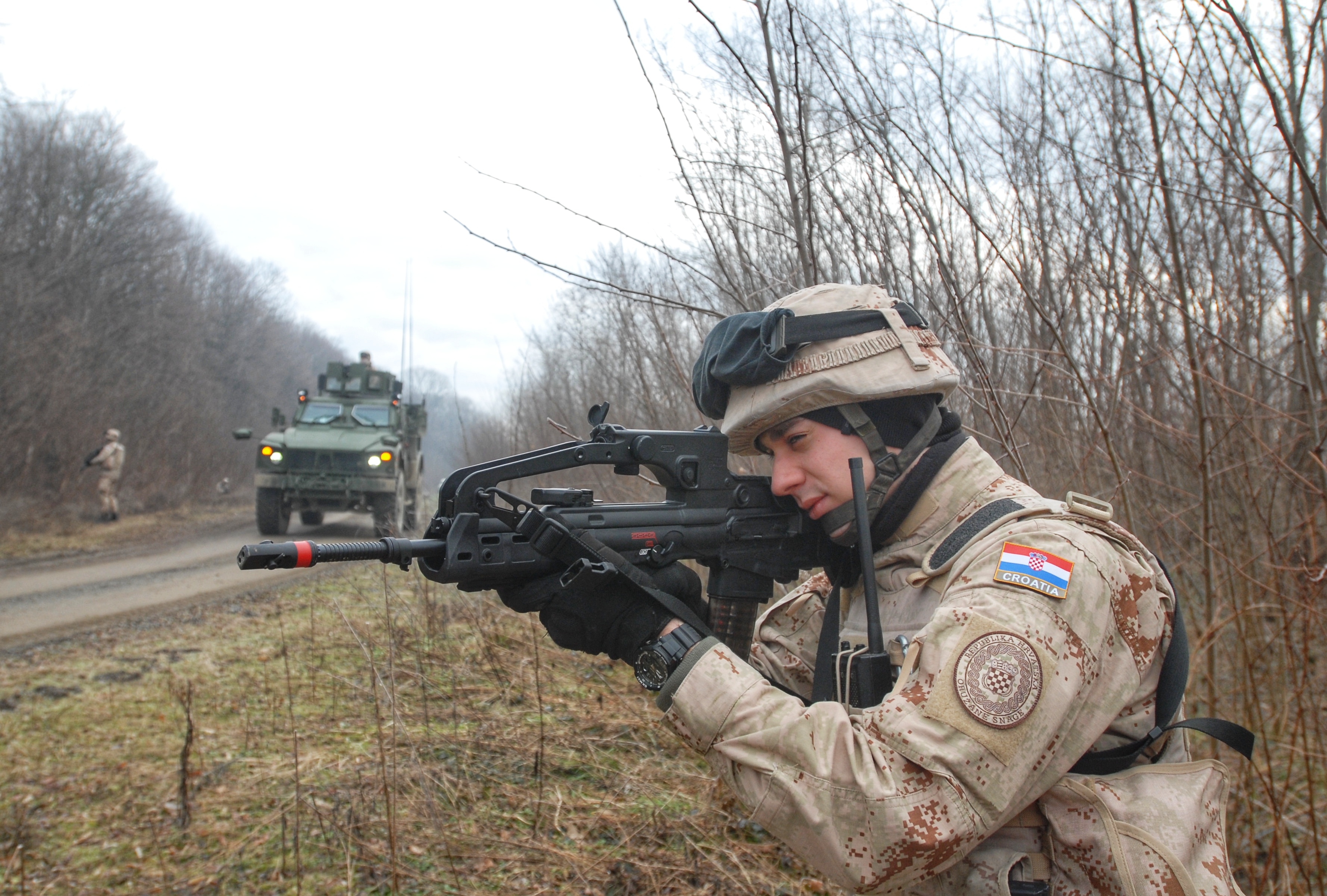 At the laying of the corner stone for a local school in Afghanistan, the local government is awaiting the arrival of foreign distinguished guests. The members of the 10th Croatian Contingent are tasked with accompanying and protecting VIPs. They arrive in front of the school in a convoy and begin to thoroughly inspect the area. A suicide bomber is hiding among the Afghani people in front of the future school building, waiting for the right moment to activate the murderous weapon which he is carrying on him. However, the members of the Force Protection Company detect the potential danger during the inspection and leave the event with the person whom they were tasked to must accompany and protect.

The objective of this simulation is to check how the Croatian contingent, which is going to be deployed to Afghanistan in March, would react in a real situation. That is one of a number of possible challenges awaiting them there. Before deployment, they have to go through the final evaluation.

All of this took place at the international military exercise Mir 19/1 on Training Range “Gašinci” from 6th to 13th February. During the exercise, the final training and evaluation of the 10th Croatian Contingent’s individual duties were conducted. The 10th Croatian Contingent is set to be deployed to Afghanistan in March to participate in NATO’s mission Resolute Support.

Between 11th and 13th February, tactical skills and combat capabilities were practically tested and evaluated at the training range through made-up events and incidents. 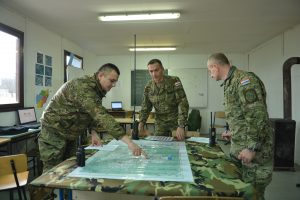 The Commander of the 10th Croatian Contingent Colonel Dragiša Konsa said that the participation in mission Resolute Support was a challenging task for every member of the contingent, him included. “The obligatory part of the preparations is the contingent commander’s reconnaissance of the area of operation in Afghanistan, where he and his associates are directly introduced to the most important issues and challenges awaiting them there. Exercise Mir 19/1 is the final and most important test of the readiness and capabilities of the contingent’s components to execute the tasks in the mission. I believe that every contingent member is fully prepared for the tasks awaiting them,” Colonel Konsa concludes.

Colonel Drago Pondeljak was the director of the exercise and managed its execution. “During all phases, the participants and the key personnel who were responsible for the functioning of individual elements in the structure of the exercise assembled everybody’s comments. After their analysis, these lessons learnt will be instilled in future training activities of this type.”

NATO’s Combat Readiness Evaluation (CREVAL) was used as a tool, standard and working methodology for the evaluator team in exercise Mir. The evaluation sheets were designed in accordance with capability matrices and contingent members’ job descriptions, i.e. they were adjusted to the structure of the contingent, which is not a tight-knit unit like the ones that are normally evaluated with CREVAL. This is an original Croatian national evaluation standard which is interoperable with NATO’s standards and with CREVAL.

Colonel Mijo Kožić, Head of the Team for the Supervision of Evaluator Teams of the General Staff of the Croatian Armed Forces

They had the big responsibility of conducting the evaluation of all contingents’ components and individual members, who had to confirm their readiness for training the Afghan National Defence and Security Forces (ANSDF) so that they could sustain themselves and prptect the people of Afghanistan. After all is said and done, I want to commend everybody’s hard work and thank the evaluator teams who finished the CREVAL course and practically applied the national readiness evaluation system.

As a responsible member of NATO that enjoys the same rights as all other member countries, the Republic of Croatia has been participating in the Alliance’s most important activities, operations and missions for years. It participates in mission Resolute Support, giving a big contribution to the success of NATO’s currently most important mission. The members of the jubilean 10th Croatian Contingent possess a high level of trainedness, physical readiness, courage and responsibility, which is a guarantee that they will successfully execute all the tasks awaiting them in the area of operation. The following training centres played an important role in the preparation of the contingent’s components: the International Military Operations Training Centre in Rakitje, the Training and Doctrine Command of the Croatian Army in Osijek, the Logistic Training and Doctrine Centre in Požega, the Training Centre of the Military Police in Zagreb and the units of the Special Forces Command, while the contingent’s commander was trained at the Command Operations Centre of the General Staff of the Croatian Armed Forces.

The preparations and training of the members of the 10th Montenegrin Contingent in mission Resolute Support in Afghanistan were conducted with the support of our allies from the Croatian Armed Forces on training ranges in the Republic of Croatia in three phases. In the first phase, which lasted three weeks, a part of the Montenegrin contingent went through training for the role of a Combat Lifesaver (CLS) at the Logistics Training and Doctrine Centre in Požega. At the same time, training for the drivers of MRAP vehicles was also conducted in Požega.

In the second phase, which also lasted three weeks and took place at Training Range “Gašinci”, the Montenegrin contingent conducted a joint training with the Croatian contingent in the activities from the peacekeeping mission which the members of the two contingents will also conduct in Afghanistan.

I would like to use this opportunity to express my deep gratitude to the members of the Croatian Armed Forces for their selfless support and help in our training at training ranges in the Republic of Croatia. Finally, I wish all the members of both contingents a successful execution of all tasks in the mission. I hope we shall come back to our families in our respective countries alive and well.