Back to homepage »
Share:
"The Military Maritime Studies are of great importance  for Croatia as a maritime country. They will train quality personnel for the institutions in Croatia and worthy upholders  of the maritime tradition", said the Defence Minister Damir Krstičević during the oath-taking ceremony of the 16th generation of cadets of the Croatian Defence Academy “Dr Franjo Tuđman“ 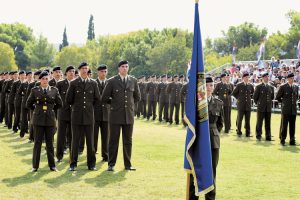 135 cadets of the 5th generation of Military Engineering, Military Management and Military Pilot study programmes and 33 cadets of the first generation of the Military Maritime Studies took their oath in a ceremony held in the Barracks “Fleet Admiral Sveto Letica-Barba“ in Split on 21 September 2018.  It was the first oath-taking ceremony held in Split, and along with the cadets from Croatia, 16 cadets from partner countries (Bosnia and Herzegovina, Montenegro and Kosovo) were also present.

Minister Krstičević  underlined the importance of the new study programme of Military Maritime Studies in the University of Split in his address.

“The Military Maritime Studies are of great importance  for Croatia as a maritime country. They will provide quality personnel for the institutions in Croatia and worthy upholders of its maritime tradition. The cadets and the well designed study programmes guarantee the future of the Croatian Armed Forces. Knowledge is power and a must for the development of the Croatian Armed Forces. Have confidence in your talents and potentials“, the Minister said.

Ministar Krstičević congratulated the cadets for choosing the military profession: “Confront the challenges bravely, propose new ideas and solutions and set the example to the people around you.“

Minister concluded by promising that they would be congratulated with a performance of the Croatian F-16 aircraft at their graduation ceremony in five years’ time. 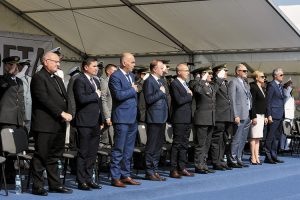 The Envoy of the President of the Republic of Croatia said that the oath-taking was a major honour and responsibility in his address : “By taking the oath, you have committed to guarding the memory of the Homeland War and the fallen defenders, the biggest values underlying the modern state of Croatia. You can  become successors of the best soldiers of the most glorious period of our history.“

Major General Mate Pađen extended the appreciation to the universities of Split and Zagreb for their assistance with the management of the existing study programmes and stated that the Croatian Defence Academy would make efforts to grow into an institution offering lifelong learning.

The cadets were also addressed by Rector Anđelinović, who said: “The Croatian Defence  Academy and the University of Split will do their best to ensure the best education and skills for the cadets.“

The Commander of the Cadet Company Captain Hrvoje Šimleša praised the oath taking ceremony for the first generation of cadets of Military Maritime Studies being held in Split, in the Barracks which are to be their home for the following  five years.

The oath-taking also featured a static display in the Barracks and the ceremonial drill by the Honorary Battalion.