Back to homepage »
Share:
The send-off ceremony for  the 1st Croatian contingent to NATO Sea Guardian Maritime Security Operation in the Mediterranean made up of the ship of the Croatian Navy RTOP-41 "Vukovar" and crew, was held in the Barracks "Fleet Admiral  Sveto Letica- Barba" in Split on 3 September  2018 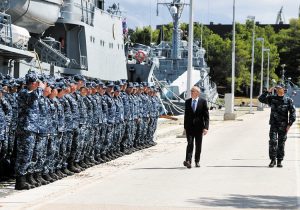 The send-off ceremony for  the 1st Croatian contingent to NATO Sea Guardian Maritime Security Operation in the Mediterranean made up of the ship of the Croatian Navy RTOP-41 “Vukovar” and crew, was held in the Barracks “Fleet Admiral  Sveto Letica- Barba” in Split on 3 September  2018.

This is a first engagement of a Croatian Navy  ship in a NATO-led Sea Guardian operation, in support of the Republic of Croatia’s contribution to the allied efforts to ensure maritime security. The  Contingent is composed of 33 members of the Croatian Armed Forces and is commanded by Lieutenant Commander Nikola Bašić, aboard the missile boat “Vukovar”, commanded by Captain (N) Ante Uljević.  The flagship will be a boat of the Italian Navy, which is also taking part in the Operation 18-4.

The send-off ceremony was attended by the Croatian Deputy Prime Minister and Defence Minister Damir Krstičević, his special advisor Božo Kožul and the Chief of the General Staff of the Croatian Armed Forces of the Republic of Croatia General Mirko Šundov. Minister Krstičević stressed that the operation was an opportunity for Croatia as a maritime country demonstrated the systematic  approach to maritime security and the dedication to the protection of  the national interests at sea; the Croatian Navy being its main guarantor“.

General Šundov expressed his conviction that How will the Croatian Army, by participating in the Sea Guardian operation once again show that it is always ready to strengthen relations and cooperation with its partners and neighbors, is convinced by General Šundov. “I am grateful to all of you boldly leaving for the Operation Sea Guardian,, to contribute to its  success and to the high reputation of  Croatian Armed Forces and Croatia. I expect you to professionally fulfill your tasks and to respect the security procedures”, said General Šundov. The Commander of the Croatian Navy, Commodore Ivo Raffanelli stressed that over the past weeks the members of the Croatian Navy  worked hard to prepare for the demanding task. 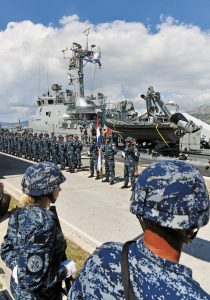 “The evaluation of your readiness for the Operation guarantees the efficient completion of the task assigned, to the pride of all members of the Croatian Navy and of the Croatian Armed Forces and the entire country. This task has been assigned to you in full confidence that you will responsibly fulfill it“, said Cdre. Raffannelli. The Contingent is assigned with non-combat  tasks – primarily with supporting maritime situational awareness to thwart possible threats and supporting NATO ‘s Strategic Communication.The Sea Guardian operation has also significantly improved security in the Mediterranean and, given its flexibility in operations, ensured the harmonious engagement of human and material resources of the EU and NATO member states in achieving common security objectives. The Commander of the Croatian Navy, Commodore Ivo Raffanelli stressed that the Navy members in the past few weeks had made considerable efforts to prepare for the demanding task. The Commander of the contingent, Lieutenant Commander  Nikola Bašić explained that the participation of the missile boat “Vukovar” in “Sea Guardian“ was of high importance for the Croatian Navy’s Flotilla and stressed his belief in the honourable and professional performance and conduct of the 1st HRVCON, representing  proudly the Croatian Armed Forces and Croatia.

“This is both a challenge and an opportunity for the boat’s crew , to present the capability, determination and potential. The endurance and autonomy of the ship, ship systems and the crew will be tested thoroughly in hydrometeorological conditions in the central and south  Mediterranean”. The “Sea Guardian“’s mission is to support maritime situational awareness, the development of regional maritime security, supports inst terrorism, provides freedom of navigation, conducts naval interdiction, contributes to the fight against the proliferation of weapons of mass destruction, protects the key infrastructure and helps develop naval capabilities of partner countries in the Mediterranean.