Back to homepage »
Share:
The formal send-off ceremony for the 2nd Croatian Contingent to the Resolute Support mission in Afganistan was held in the “Pukovnik Marko Živković” Barracks at Pleso on 4 March 2015.The members of the departing Contingent were addressed by  the President of the Republic, Mrs Kolinda […] 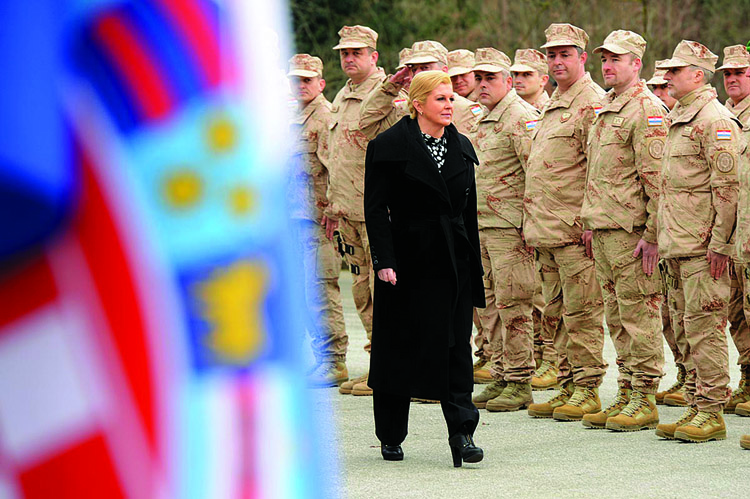 The formal send-off ceremony for the 2nd Croatian Contingent to the Resolute Support mission in Afganistan was held in the “Pukovnik Marko Živković” Barracks at Pleso on 4 March 2015.
The members of the departing Contingent were addressed by  the President of the Republic, Mrs Kolinda Grabar Kitarović, as Supreme Commander of the Croatian Armed Forces, accompanied by the Defence Minister, Ante Kotromanović and the Chief of the General  Staff of the Croatian Armed Forces, General Drago Lovrić with the respective delegations , the members of the Diplomatic Corps and other invitees.
The President  emphasised being honoured and glad to have the opportunity to address the Contingent members as their supreme commander on their depart.  „it is always hard to leave the  homeland, particularly to take part in a hazardous and challenging mission. Therefore, I appreciate your valour and determination to work for the benefit of Republic of Croatia and the international community. Having visited Afghanistan on several occasions, and been deployed as a civilian, I witnessed to the professionalism evinced by the Croatian soldiers throughout the mission. Some 4500 members of the Croatian Armed Forces who took part have evidently contributed a lot to the mission’s success. Although the country has visibly progressed, there is still a lot of work to do, and your duties within the new mission are highly important in many fields“, said the President, who also expressed the hope  to visit the Contingent during their stay in Afghanistan.
Defence Minister, Ante Kotromanović announced coming to visit the Contingent in Afghanistan in the Resolute Support as advisory mission, where our contingent has been reduced compared to the ISAF contingents, but we remain present in Afghanistan, to conclude the our work there and confirm ourselves as a reliable Allied country. Working in an international surrounding, with over 50 countries is an immense experience for our Armed Forces. I welcome also the partner forces of the A-5 countries , whom we value highly as the proof of the importance Croatia attaches to the security and stability in the region“, stated the Minister.
In his send-off address the Chief of the General Staff of the Croatian Armed Forces, General Drago Lovrić, stressed that the mission would bring new experiences and knowledge. “ Croatian forces’ contribution in the training and mentoring of the Afghan forces is growing prominent , and each new Contingent will focus increasingly on the transfer of knowledge and the support to the development of the Afghan military and police“.
The 2nd HRVCON Commander, Colonel Stanko Paradžiković stressed his pride of leading „a special, multinational Contingent, composed of members of the Armed Forces from five countries; professionals who have completed highly demanding pre-deployment training“.
The Contingent, Commaned by Colonel Stanko Paradžiković,  is composed of 81 members of the CAF and 21 members of the armed forces of Albania, Bosnia and Herzegovina, Montenegro and Macedonia, and an additional advisory team to the Special Police Training Centre, where Croatia has been assigned the role of the Lead Nation. The new component are also advisors to the Air Advisory Team of the Afghanistan Air Force.
As the ISAF mission ended in December 2014, NATO countries and partners have remained present in Afghanistan , continuing their contribution in a peace support mission titled Resolute Support, launched on 1 January 2015.
The last HRVCON to ISAF, deployed to Afghanistan in 2014,has since the beginning of 2015 converted the mandate as 1st HRVCON to the Resolute Support Mission.
The overall Croatian troops to ISAF since the entry to ISAF and Resolute Support respectively totalled 4525, including 162 females. 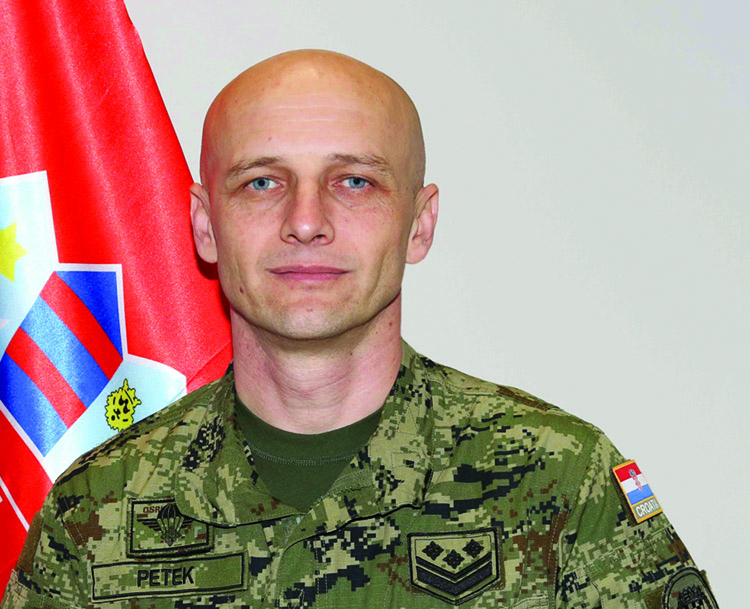 SMA Petek appointed Senior NCO to ACO
As proclaimed by the President of the Republic of Croatia, Mrs Kolinda Grabar-Kitarović, during the send-off ceremony for the 2nd HRVCON to Resolute Support on 4th March, the Senior NCO of the Croatian Armed Forces, Sergeant Major of the Army Davor Petek has been appointed the Senior NCO to the NATO Allied Command of Operations.
“The Croatian Armed Forces’ CSEL has been selected from respectable candidates from 19 country for the post, and I am extending my most sincere congratulations. SMA Petek is an ISAF participant himself,  which speaks of his professionalism and superb exercise of duty as member of the Croatian Armed Forces“,  said the President.
“We have received the formal notification of my appointment as NCO to the ACO. NCO to ACO is the chief advisor to the SACEUR regarding the issues of enlisted personnel and NCOs throughout the Alliance. It is an immense honour to me personally, and a major recognition to the Republic  of Croatia as new NATO member for the achievements of the members of its Croatian Armed Forces in international operations“  said SMA Petek.
SMA Petek is to assume the duty on 19 June 2015, succeeding the current Senior NCO-Command  Chief Master Sergeant Richard T. Small.The Senior NCO advises SACEUR on the development of enlisted soldiers and NCOs of NATO and Partnership for Peace countries, mentors them and presents their needs to NATO’s  senior management,and takes care of their professional development and standardisation of the Allied procedures.