Back to homepage »
Share:
The 28th generation of voluntary conscripts (93 conscripts) attended an 8-week military training at the Infantry and Armoured Units Training Centre in Požega 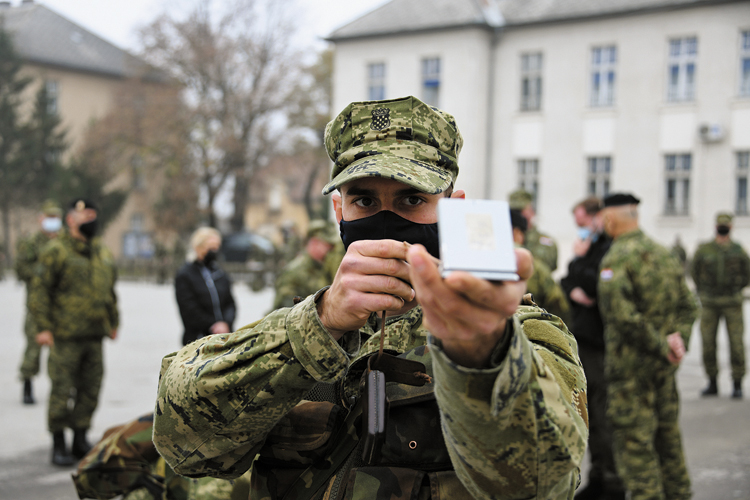 “The training is conducted in difficult conditions, but with full respect of epidemiologic measures. I am extending congratulations to instructors and conscripts on their professionalism, persistence and hard work towards a successful training”. The Minister also commended the conscripts on choosing a career in the military aid serving the Croatian people.

“You are the future of the Croatian Army. You came here of your own will and desire, and for that reason you will always be the best army. The training you have successfully completed is a first step towards your military careers and the basis for further development and acquisition of new knowledge and skills. I appreciate your accepting an additional challenge at this challenging time. You are wearing the same uniforms as the many defenders in their honourable service for the homeland. May that be your guide in your future”, said the Minister.

General Jurković congratulated the conscripts on the successful completion of the training and appreciated their decision to take up voluntary military training. “Special appreciation goes to your families for upbringing you up in the patriotic spirit, which brought you here in the first place.  Please forward them that, because it’s important. It is important for you, for your families, for the Croatian Armed Forces, and for our homeland too”.

Addressing the conscripts Lieutenant General Šerić said that they continued the tradition of the patriotic Croatian defenders who fought for freedom during the Homeland War.

Conscript Ana Bajić from Trilj expressed appreciation to the Minister for the visit: “On behalf of the entire third company, I would like to thank you for coming to us, despite this difficult epidemiological situation, to support us and show that you care about us. In the training, we learned to cultivate values ​​such as truthfulness, justice and loyalty, and belonging to the community. We hope to join the large family of the Croatian Army soon, “said the conscript.

The Minister also toured the shooting range at Novo Selo and the training range at Glavica, where conscripts conducted s practice drills shooting with AK-47 rifles. By shooting at a 10-cm circle in the drill target from a 100-m distance the conscripts fulfilled the prescribed shooting standard.

Tactical exercises comprising the movement across the battlefield, movement in pairs, offensive and defensive operations, reaction to direct fire, explosive device response and other skills acquired during the training.

The Commander of the Basic Military Training Battalion Lieutenant Colonel Ivica Markanjević briefed the Minister on the structure, mission and tasks of the Battalion and presented the 28th generation.

The training is administered in the Barracks “123. Brigada HV” in Požega, the shooting range at Novo Selo and the training ground “Glavica”.