Back to homepage »
Share:
„The fact that you are well trained, equipped and motivated gives us confidence and security that you will execute this task professionally and responsibly, and make your homeland proud. I believe that this operation will enhance your interoperability and your capabilities,” Defence Minister Damir Krstičević pointed out. 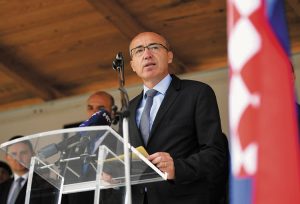 The 2nd Croatian Contingent to UN’s peace support mission in Lebanon UNIFIL (United Nation’s Interim Force in Lebanon) was formally sent off in Barracks “Kamensko” in Karlovac on 19th October. The send-off was attended by Deputy Prime Minister and Defence Minister Damir Krstičević, who also served as the Envoy of the President of the Republic of Croatia and the Commander-in-Chief of the Croatian Armed Forces, the Chief of General Staff of the Croatian Armed Forces Mirko Šundov, special advisor to the Defence Minister Božo Kožul, Military Attaché of the United States of America in Croatia Colonel Robert Mathers, the Mayor of Karlovac Damir Mandić, delegates of the Ministry of Defence and the Croatian Armed Forces as well as friends and family of the members of the 2nd Croatian Contingent.

Minister Krstičević reminded the guests at the ceremony that Croatia had evolved from a country receiving international assistance to a country providing international assistance, while the participation in peacekeeping operations had been one of the decisive factors in Croatia being accepted into NATO and the EU. He also pointed out that the Croatian Army manifested the strength in had acquired in the Homeland War not only in activities abroad, but also in military exercises on home turf, with one such example being the recently executed exercise “Velebit 18 – Joint Force”. “During the exercise ‘Velebit 18 – Joint Force’, the domestic and international public had an opportunity to see that the Croatian Army ranks among the world’s best militaries. The Croatian Army shall continue to train in order to always be alert, capable and fit,” the Defence Minister added. He further expressed conviction that the 2nd Croatian Contingent would execute their tasks in UNIFIL as effectively as they did in exercise “Velebit 18”. „The fact that you are well trained, equipped and motivated gives us confidence and security that you will execute this task professionally and responsibly, and make your homeland proud,” the Minister said. “I believe that this operation will enhance your interoperability and your capabilities.”

The Chief of General Staff General Mirko Šundov also expressed his belief that the members of the 2nd Croatian Contingent would execute their tasks as successfully as their predecessors from the 1st Croatian Contingent and that they would acquire new knowledge which would contribute to the development of the Croatian Armed Forces. He sent the following message to the 2nd Croatian Contingent: “UNIFIL is a demanding operation. I expect of you to professionally complete your tasks, uphold safety procedures in the execution of the said tasks and mind the safety of your colleagues.” 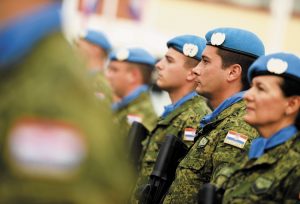 Chief of Staff and Deputy Commander of the Croatian Army Brigadier General Boris Šerić commended the members of the 2nd Croatian Contingent for professionally conducted pre-deployment training and reminded them that they would acquire the most valuable lessons in the mission ahead of them. “Your unit will not be the same once you return to homeland. You will have been enriched by months-long experience of intensive labour in a multinational environment. Knowledge gained in such a way will be of immeasurable importance for the development of your capabilities,” General Šerić said.

“With our heads held high, guided by the spirit of the victorious Croatian Army, we follow in the footsteps of our colleagues in operation UNIFIL. Departing on a peacekeeping mission is a challenge, but also an opportunity to prove ourselves as a capable unit,” the Commander of the Engineer Company of the 2nd Croatian Contingent to UNIFIL Captain Ivan Dodig pointed out. On behalf of the entire contingent, he thanked everyone who had supported them during their pre-deployment training.

A static display was featured in Barracks “Kamensko” during the ceremony, while Don Ivan Blaževac concelebrated a mass in St. Guardian Angels’ Chapel. In his sermon, Don Blaževac told the members of the 2nd Croatian Contingent to spread peace to the people of Lebanon and to one another, for they can successfully complete their mission only if they stand together.

The 2nd Croatian Contingent is made up of 52 members of the Engineer Company of the Croatian Army. During the rotation, they will work with Italian Armed Forces on implementing force protection measures, supporting mobility in the area of the operation, securing undisturbed strategic and tactical communication as well as providing other types of support to UNIFIL’s Sector West.