Back to homepage »
Share:
The snow melt and spring rains have raised the level of rivers and thretened to flood in the the Karlovac, Sisak, Kostajnica and Jasenovac areas 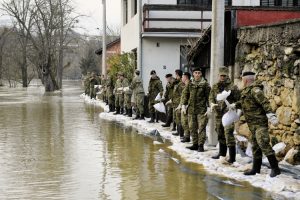 The snow melt and spring rains have raised the level of rivers and thretened to flood in the the Karlovac, Sisak, Kostajnica and Jasenovac areas. The “Hrvatski vojnik“ magazine team toured the flood-hit areas – the situation was the worst around Jasenovac, where the river Sava surpassed 920; the members of the Sokolovi Battalion was on the spot, filling sandbags and transferring them to the right bank of the river, where others were building sandbag walls. When a few weeks ago many locations in Gorski kotar and Lika regions were covered with the snow the residents were looking forward to the spring ; when it came it brought trouble to other regions – those lying along the rivers – Karlovac, Jasenovac, Hrvatska Kostajnica. The waves looked appalling were ; in the places normally covered by woods only the branches were seen and the trunks remained in the water. In Jasenovac the local football pitch resembled a swimming pool. The worst situation was at Uštica, where the members of the 1st Battalion of the Guards Armoured-mechanised brigade filled bags for the sandbag walls. The football pitch a few yards away and the adjacent cemetery were immersed in the water. The members of the Battalion remained calm in the face of the calamity and kept filling the bags and sending them across the river where others were building the walls, which restored the locals’ hope that everything was going to be fine in the end. The members of the “Sokolovi“ Battalion we met at Uštica were only a part of a total of two hundred soldiers who had been making efforts to defend Jasenovac. 300 more soldiers, from various units of the Croatian Army (the Special Forces Command, and of Support, the Engineer Regiment) were stand-by should the situation worsen. IN previous days they experienced the hard field conditions themselves.No mission could be planned, as the engagements depended on the weather and water levels, and they moved from Karlovac to Jasenovac and back. They were assisted by the police, the fire brigades, the Red Cross, the Mountain Rescue Service, the National Water Authority and the local authorisites, and followed the guidelines from the Flood Response Staff of the Sisak-Moslavina County. 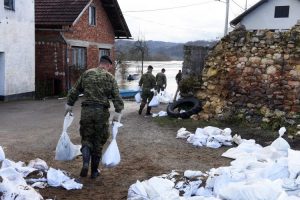 Our visit coincided with the meeting of the Flood Response Staff with the Croatian Prime Minister Andrej Plenković and with the Deputy Prime Minister and Defence Minister Damir Krstičević, the Minister of Environment and Energy Tomislav Ćorić, the Prefect of the Sisak-Moslavina County Ivan Žinić and the Mayor of Jasenovac Marija Mačković, after which they toured the depots at Uštica and in the bags filling spots at Jasenovac forestry; Prime Minister Plenkovic and Minister Krstičević talked to the soldiers and to the civilian services personnel and inquiored about the living conditions of the locals. The Prime Minister commended the co-operation of the Croatian Armed Forces with the civilian response teams during all emergencies during the past months. “This co-operation proves that the homeland security system and the emergencies response have been upgraded; through joint engagement we aim to assist the people and reduce the water damage“.  Minister Krstičević delivered a motivational address commending and appreciating the soldiers’ efforts. “I saw for myself your attachment to the Croatian people and the wish to help: The Minister praised the commitment by the soldiers, NCOs and officers in the relief activities” He also reminded them of the importance of synergy, co-ordination, partnership and solidarity in times of need as key factors of homeland security. The soldiers’ tireless work and the Prime Minister’s and Defence Minister’s encouraging words instilled optimism, however the end was still far. On leaving Jasenovac we heard the news that the embankment broke and a road near Sisak was flooded. We were concerned about whether the roads would be closed to traffic and impede our return home. The fall of the water level of the river Una was forecast, and a part of the influx of the Sava river overflowed the area of the adjacent nature park (Lonjsko polje) , the National Water Authority estimated that the water level of Sava would actually rise by 15 to 20 cm and that the emergency would last for a week at least. However, the Commander of the Croatian Army, Brigadier General Siniša Jurković reassured us that there was no need to worry as long as the Croatian Armed Forces was in charge of the local population. “We are ready for any contingency. We are stand-by to assist, in accordance with our capacities and capabilities”. Undoubtedly, the Croatian Armed Forces took good care of the residents of Jasenovac and other threatened areas through the hard time with least damage.