Back to homepage »
Share:
The legendary 5th Guards Brigade of the Croatian Army was established on 5th October 1992, and comprised a total of 7,000 members, 89 were killed and more than 300 were wounded 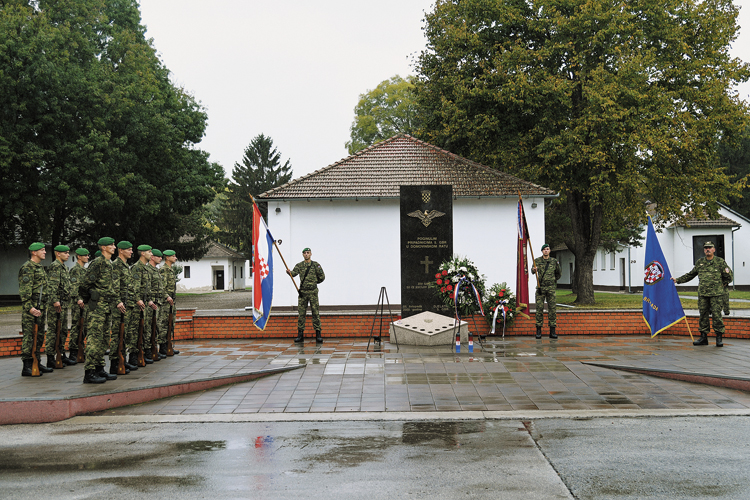 The 5th Guards Brigade “Slavonski Sokolovi ” marked 28th anniversary in the Barracks in Vinkovci on 7 October 2020.

Shortly after the establishment the members of the 5th Brigade were assigned to defend Zadar and the inland region in early 1993 (Operation “Maslenica“), and later to the Southern Battlefield (Mostar, Uskoplje and the Livno Battlefield).

The unit in peacetime

The Brigade had an important contribution in the Operation “Lightning“, converging  the forces against the 18th Corps of the Army of Serbian Krajina, which enabled rapid liberation of western Slavonia.

In the military and police Operation “Storm“, “Sokolovi“ strongly defended the line of separation line, awaiting the order to liberate the remainder of the temporarily occupied territory of Croatia.

The Brigade had a total 7,000 of members during the Homeland War, 89 were killed and more than 300 injured.  The war ended, the Brigade placed the focus on education and training and was converted from a combat unit into a well- trained peacetime unit of the Croatian Armed Forces. Within the major reorganisation and modernisation of the Croatian Armed Forces the 5th Guards Brigade ceased operations on 28 February 2003. The tradition of the legendary “Sokolovi“ passed on the  1st Armoured Mechanised Battalion “Sokolovi“ of the  Guards Armoured Mechanised Brigade of the Croatian Army, based in Našice.

A lasting mark in the history of war

The marking of the 28th anniversary of the 5th Guards Brigade “Sokolovi“ in ​​Vinkovci was attended  the Envoy of the Prime Minister of the Republic of Croatia Mario Banožić, by the Chief of the General Staff of the Croatian Armed Forces Admiral Robert Hranj, by the Advisor to the Prime Minister Damir Krstičević, by the Deputy Chief of the General Staff Colonel Siniša Jurković, by the Commander of the Croatian Army Lieutenant General Boris Šerić, the Commander of the Guards  Armoured Mechanised Brigade Brigadier General Mijo Validžić, the Envoy of the Minister of the Homeland War Veterans Stjepan Sučić and by representatives of the local  authorities.

“The war history of the 5th Guards Brigade “Sokolovi“ left a lasting mark in the war history of the Croatian people. The Brigade fought the hardest battles, from the fierce Battle for Vukovar to the operations defending Vinkovci, Županja, Osijek, Đakovo and Slavonski Brod, fought in the Zadar hinterland to the Southern Battlefield”, said Minister Banožić. The Minister also emphasised that the defenders were a perennial example patriotism and: “We need to draw strength and motivation from their feats in to build Croatian society in all areas. For that sake we have made efforts to continue developing the Croatian Armed Forces, which guarantee the security and stability of the Republic of Croatia.

Congratulating the anniversary of the founding of the 5th Guards Brigade, Admiral Hranj emphasised that its members were engaged in hardest operations from the very start of the Homeland War, never growing tired and weary, with a strong faith in victory and ready to sacrifice everything for the freedom of the Croatian people and homeland.

“Their sacrifice made the dream of a free and independent homeland a reality. The Croatian Armed Forces became a military force whose members take part in operations and missions worldwide alongside the partner countries, and are ready to provide assistance to the citizens whenever necessary“, said Admiral  Hranj.