Back to homepage »
Share:
The send-off ceremony for the 8th HRVCON to Resolute Support Mission in Afghanistan was held in the Barracks “Pk Marko Živković" in Zagreb on 1 March 2018. 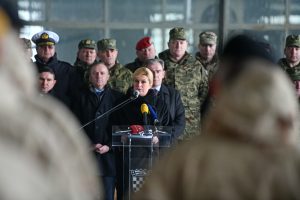 The send-off ceremony for the 8th HRVCON to Resolute Support Mission in Afghanistan was held in the Barracks “Pk Marko Živković” in Zagreb on 1 March 2018. The 8th HRVCON is composed of 106 members of the Croatian Armed Forces and of the foreign armed forces  of Albania, Montenegro, Bosnia and Herzegovina and Macedonia.mIt also has two military working dogs. The ceremony was attended by the President of the Republic as Supreme Commander of the Croatian Armed Forces Kolinda Grabar-Kitarović, the State Secretary for Defence  Tomislav Ivić, the Chief of General Staff of the Croatian Armed Forces General Mirko Šundov, the Military Ordinary Msgr. Jure Bogdan, the Mayor of Velika Gorica Dražen Barišić, defence attaches of Albania, Bosnia and Herzegovina, Montenegro, Republic of Macedonia and the United States, the representatives of the Office to the President of the Republic, of the Ministry of Defence and of the Croatian Armed Forces. Reviewing the past 15 years of the engagement of the Republic of Croatia in ISAF, Afghanistan, the President of the Republic underlined the significant progress achieved  in the peace efforts, and stated that the mission in Afghanistan, was not finished yet . The President called on  the Contingent members to demonstrate  responsibility and professionalism exercising their duties and respect to the people of Afghanistan and extended appreciation to their family members for their support. “The experience from the Homeland War is invaluable, and passed through the Croatian defence system on to the young generations; it makes the Croatian defenders and members of the victorious Croatian military a highly reliable partner in peace operations and missions. The Croatian soldiers enoy high respect from the command structrure and from the local population”, stated State Secretary for Defence Tomislav Ivić, who also stressed the importance of  the family support, and pledged support of the Ministry of Defence and the Armed Forces to them during the service in the Mission. The Chief of the General Staff of the Croatian Armed Forces, General Mirko Šundov in his address said: “You are leaving for Afghanistan to do demanding and responsible tasks. I am certain that you will help the Afghan National Security Forces  assume responsibility for the situation and safety in their country“. 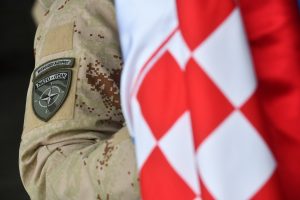 General Šundov stated the Contingent was expected to conduct the tasks professionally, with mutual respect and compliance with the security procedures. “Participation in international missions has opened new horizons and created new challenges for us and provided us with new experiences; I hope you are ready for them and that you will duly fulfill all the assigned duties“.  The Chief of the General Staff stressed that they were expected to carry out their professional tasks, respect each other, and in particular comply with security procedures and procedures in order to avoid possible security threats, carry out their mission and return to their families. The 8th HRVCON Commander, Colonel  Branko Tubić, stated that its members would be assigned to  TAAC – North (Mazar-e Sharif) and to Resolute Support Command in Kabul, , to staff diuties and as advisors to the Afghanistan’s military, police and special forces, force protection to advisors and advisor teams, medical and military police duties ,and that the Contingent was ready to take on the duties. Colonel Tubić stated that the 8th HRVCON to RsS was ready to perform its tasks responsibly and professionally.