Back to homepage »
Share:
A press conference was held at the headquarters of the Croatian Ministry of Defence in Zagreb on 24th July, following an attack on three Croatian soldiers from the 10th Croatian Contingent in Resolute Support, NATO’s peace support mission in Afghanistan. Two soldiers sustained severe injuries, while one soldier unfortunately succumbed to his injuries 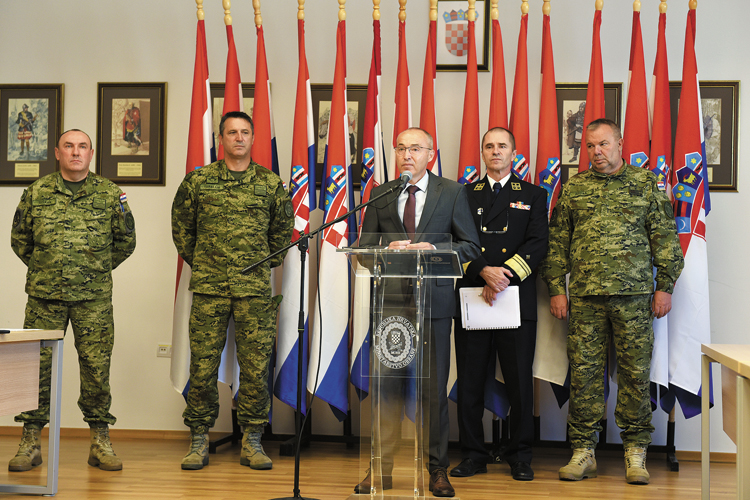 At 8:45 a.m. AFT, a convoy comprised of the Croatian Armed Forces’ vehicles was attacked in front of Camp Lion, Kabul, and three members of the Special Forces Command sustained severe injuries. The injured soldiers are assigned to the UK-led Special Operations Advisory Group, the headquarters of which are at Hamid Karzai International Airport in Kabul.

“One of the three soldiers sustained severe injuries to the head and his condition is critical. The other two soldiers were injured in the arms and legs, but their condition is stable,” said Deputy Prime Minister and the Minister of Defence Damir Krstičević, underlining that the attack was an isolated incident and that all other members of the Croatian contingent were safe. “Our officers are with the families of the injured soldiers, helping them and supporting them. I spoke with the President of the Republic of Croatia and the Croatian Prime Minister this morning and informed them about the incident,” Minister Krstičević said.

Minister Krstičević expressed regret over the attack on Croatian soldiers, stressing that the most important thing at the moment was to provide care to the injured soldiers. “We condemn and are horrified by the attack on Croatian soldiers participating in a peace support mission abroad. The Croatian Armed Forces will continue to strongly advocate democratic values as well as peace and stability in the world,” Minister Krstičević said, announcing that he would visit the family of the soldier with the gravest injuries after the press conference. Krstičević also said that all members of the 10th Croatian Contingent in Resolute Support were told to contact their families and let them know that they were safe. “Our thoughts and prayers are with our soldiers and their families,” Minister Krstičevič concluded.

The Commander of the Command Operations Centre at the General Staff of the Croatian Armed Forces, Brigadier General Krešo Tuškan explained that 23 members of the Special Forces Command were currently engaged in the UK-led Special Operations Advisory Group. “Their mission in Afghanistan is to advise and mentor the management of the Afghan Special Police Training Centre regarding the organization and execution of training,” General Tuškan said and highlighted: “Our team is accommodated at Camp Gibson, from where they set off on a routine task in Camp KAIA with five non-combat armoured vehicles. The armour on the vehicles meets the highest standard for non-combat vehicles and ensures maximum protection. Three persons were in each vehicle. Two vehicles separated and proceeded to Camp KAIA as planned, while the remaining three vehicles continued their journey towards Camp Lion. According to eyewitness accounts, an alleged suicide bomber drove his three-wheeled scooter into a vehicle carrying Croatian soldiers on the main road between Camp Lion and Camp KAIA at 8:45 a.m. AFT. The vehicle turned over, while the soldiers inside sustained injuries.”

General Tuškan underscored that the injured soldiers immediately received medical attention. “Two soldiers are in hospital, while the third soldier is at the airport. The Afghan National Security Forces and a NATO special team are investigating the crime scene as we speak,” General Tuškan said.

The Director of the General Staff of the Croatian Armed Forces Vice-Admiral Robert Hranj expressed regret and condemned the incident on behalf of all members of the Croatian Armed Forces and on behalf of the Chief of the General Staff of the Croatian Armed Forces General Mirko Šundov, who was travelling to Zagreb at the time of the press conference. “Our soldiers’ primary task in the mission in Afghanistan is to mentor and advise. They are not involved in combat operations or counterterrorism operations. They help develop the Afghan National Security Forces. That is why it is difficult to make sense of such an attack,” highlighted Vice-Admiral Hranj and added that such incidents were in close connection with the nature of military operations and the military calling, and occurred in spite of all training. “I hope that our soldiers will recover successfully and that we shall see them in Croatia again soon. They are receiving medical attention at a Level-3 U.S. hospital in Bagram. Once they are fit for travel, they will be transferred to Croatia with the help of our allies. At the same time, their families are receiving psychological and social assistance. As I have already said, I hope we shall see the soldiers in Croatia again soon,” Hranj concluded.

Expressing regret over the attack on the members of the Croatian Armed Forces, the Commander of the Special Forces Command Brigadier General Perica Turalija said the members of the Special Forces Command had received top training for the execution of their routine tasks and were prepared to carry out all assignments, including those given to them in Afghanistan.

The Medical Adviser to the Chief of the General Staff of the Croatian Armed Forces Brigadier General Boris Zdilar explained that the injured soldiers had received medical attention and would be transferred to Croatia once their condition was stable.

Member of Croatian Armed Forces Passes Away in Afghanistan

A member of the 10th Croatian Contingent in Resolute Support passed away on 24th July due to severe life-threatening injuries sustained in an attack on the Croatian Armed Forces’ vehicle in Kabul, Afghanistan.

J.B. (born 1992) was a member of the Special Forces Command and was engaged in Afghanistan as an advisor and mentor to the Afghan National Security Forces. Following the attack, he received medical attention at U.S. hospital in Bagram, but succumbed to his injuries.

The Ministry of Defence of the Republic of Croatia and the Croatian Armed Forces express their regret over the tragic incident and strongly condemn the attack.

I have taken this sad news with pain in my heart. This is a devastating moment for all members of the Croatian Armed Forces and for the Croatian people. Indeed, there are no words of comfort that could bring his young life back. Our son, soldier, husband and father has bravely and honourably passed into eternity and joined the ranks of great heroes and warriors. May he rest in peace.”

“I offer my heartfelt condolences to the family of the late Corporal Josip Briški, who has unfortunately succumbed to his injuries. I hope that the late Josip’s family will find strength and comfort in these difficult times.

I firmly believe that the remaining wounded soldiers will recover successfully and that we shall see them in Croatia soon. As I have witnessed during my visits to Croatian contingents in Afghanistan, the Croatian Armed Forces demonstrate a high level of readiness in this operation. Aware of the gravity of their tasks, Croatian soldiers manifest great courage, morale and faith in a successful outcome of the international mission they are participating in. The Republic of Croatia is being protected from contemporary threats such as terrorism beyond its borders.

Our thoughts and prayers are with the family of our soldiers, especially with Josip Briški’s family.”

“To the family of Corporal Josip Briški

My thoughts are with you in these sorrowful times. May the Good Lord give you strength to take this suffering as a trial and may you find comfort in knowing that you are not alone in your sorrow.

Your pain is as endless as your son Josip’s nobility and kindness that propelled him to help others in Afghanistan. May the fact that you have raised a wonderful man and an impeccable soldier bring your comfort.

Be proud of Josip, who shall forever remain in your hearts and ours as a devoted father, husband, son and brother, a wonderful human being and a brave soldier.

Our thoughts and prayers are with you and your family.”