Back to homepage »
Share:
The Croatian Armed Forces co-operate with the Minnesota National Guard in developing of the cyber defence capabilities, two workshops in the Croatian Defence Academy from 13-17 July.  Education, training, practice, information sharing, the synergy of military and civilian organisations at the national and international levels […]

The Croatian Armed Forces co-operate with the Minnesota National Guard in developing of the cyber defence capabilities, two workshops in the Croatian Defence Academy from 13-17 July.  Education, training, practice, information sharing, the synergy of military and civilian organisations at the national and international levels are the essential tools in cyber defence capability building.

The Communications and Information System Directorate of the General Staff of the Croatian Armed Forces organized two cyber defence workshops held in the Croatian Defence Academy ”Petar Zrinski“ in Zagreb from 13- 17 July, in co-operation with the Minnesota National Guard.
Along with the representatives of the Minnesota National Guard and the CIS Directorate, the workshops were attended by the members of the Military Police Service of the General Staff of the Croatian Armed Forces, the Croatian Army, the Navy and the Air Force and Air Defence, the Croatian Defence Academy, the Support Command and the CIS Division.
Opening the workshops, the Head of the CIS Security Department, Lieutenant Colonel Bruno Bešker stressed the importance of continuous training in cyberspace defence. The objective was to exchange the experience and acquire new knowledge related with the cyber defence in the Croatian Armed Forces. The communications and information systems have in the past period been the fastest developing and changing techological system, and developed countries apply them to manage their business processess.  However, Internet expansion and the interrelatedness give way to a wide spectrum of cyber threats on a daily basis, both in business and private sphere. Armed forces inevitably rely on the CIS in the transfer, processing and storing of the information required for military operation conduct, and the dependence creates vulnerabilities as a potential target for other countries, terrorists, crime organisations, hacker groups or hired hackers. A way to prevent the attacks of the kind is to ensure data confidentiality, integrity and availability in the communications and information systems. The new vulnerabilities and the opponents’ advanced targeting techniques in the time ahead can be expected to lead to a constant struggle.
The incidents of recent date reveal that cyber space is used to exert pressure and  influence against a country and to destabilise its economy and key infrastructure without conducting any operations in its territory.
It is essential therefore to build cyber defence capabilities through education, training, practice, information sharing, the synergy of military and civilian organisations at the national and international levels. The capabilities that we are developing include the protection of CIS systems, the cyber attacks detection, response and impact mitigation, the system recovery following the attack and the lessons learned definition as a basis for continuous improvement.
The workshops for the management personnel was administered by Lieutenant Colonel  Bruno Bešker, assisted by Chief Warrant Officer2 John Pelto, while the workshop for the technical personnel was administered by Major Tihomir Tomac, assisted by Chief Warrant Officer 3 Frankie Orr.
Major Tihomir Tomac briefed us on the extensive co-operation with the Minnesota National Guard in the domain of cyber defence. 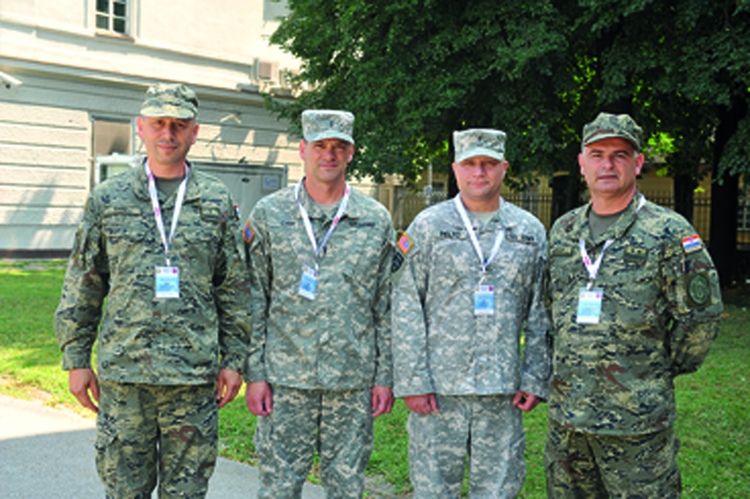 ”The building of cyber defence capability has been a subject of the bilateral co-operation with the Minnesota National Guard since 2012.  Over the past four years, since the initial assessment of our capabilities and familarisation with the Minnesota National Guard’s Computer Network Defence and their respective capabilities we have outlined the direction for the Croatian Armed Forces’ cyber defence development. We organised two workshops last year to train the technical and management personnel, which ensured better focus on the development of technical capabilities of detecting the malicious code in networks, as well as on the development of management capabilities and the computer incident handling capablities respectively.
The 2015 curriculum of the co-operation with the Minnesota National Guard is to be continued with the computer forensics workshops focussed on detecting the malicious code on the hard disk and in computer memory by means of various forensic tools and the risk assessment and management workshop. The co-operation will further continue in the subsequent period, through tematic workshops for training of technical and management personnel, aimed at increasing the capability to respond to new and ever more sophisticated threats in cyber space“, said Major Tomac .

On 15 July the workshops participants were visited by Colonel Jasenko Krovinović, the Head of the Communications and Information Systems Directorate of the General Staff of the Croatian Armed Forces, Colonel Ante Tolić, the Deputy Head of the Directorate and Miro Zeljko, the Head of the Communications and Information Division.
Colonel Krovinović underlined the importance of the development of cyber defence capabilities, of spotting new threats as well as the exchange of experiences and constant learning in the implementation of cyber defence. Colonel Krovinović called on the participants to profit from the workshop to acquire new knowledge and to pass it on to their colleagues in the Croatian Armed Forces, and presented the members of the National Guard with the certificates of appreciation for the excellent co-operation and the symbolic presents.