Back to homepage »
Share:
Having completed the pilot education programme and received their commission the 22nd generation of pilots (six in total) have officially joined the Croatian Air Force 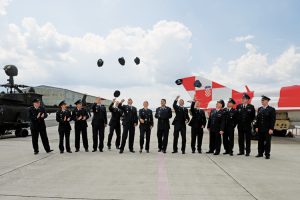 The path towards the career of military pilots is complex,  and entails selection, medical examination and testing of psychological and motor abilities test. The candidates must possess excellent  psychomotor abilities and be medically fit. Having passed the selection the students took the training, which was “demanding yet interesting; It has made me a better person“ , said  2nd  Lt. Đurašin. The students completed their theory course in the Pilots School of the Croatian Air Force’s Training Centre “Rudolf Perešin”, and took  the practical  training in the 93rd Air Base, operating the Zlin-242L, the Pilatus PC-9M and the Bell 206B aircraft, which was concluded with the display of .the capability of interception of an unknown  aerial target. 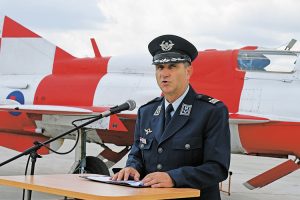 All students admit the strictness of the instructors but they are all grateful for treating them as commanders and preparing them for their future duty in the Fixed-wing Squadron or Helicopter Squadron.  During the five-year course of study the students of the 22nd generation shared the good and the bad days and marked two newborn babies to their families.  “Our entire generation was close to each other, and it has been the value of our study period“, said 2nd Lt. Rigo. The togetherness of the generation was evident indeed on the day of the diploma and wing badge award ceremony in the Barracks ”Pukovnik Marko Živković“ at Pleso. ”The Croatian Air Force is richer for six eccellent members and pilots: we are looking forward to our duties in the units, hoping for  a lot of experiences, work and flying hours“, said 2nd Lt. Ćurković – the best performing student of the 22nd generation The pilot promotion ceremony was attended by the Commander of the Croatian Air Force, Brigadier General Mato Mikić, who proudly stated: “This is a day of pride for the Ministry of Defence and the Croatian Armed Forces – as the entry of six new pilots is an important achievement of the military education system;, which thus demonstrates  the  our capability to train and prepare top-level personnel”. General Mikić also called on the graduates to guard and promote the values ​​of the Republic of Croatia. The new generation of pilots expressed appreciation for the support provided by their family members.  “You supported us  with your faith through our ups and downs and instilled new strength and encouragement“, said 2nd Lt. Ćurković in her address. A flypast by a MiG-21 over the Base concluded the certificate award ceremony, whereby the young  pilots opened a new chapter in their careers. After the formal conclusion of their education and the graduation ceremony in Vukovar  the 22nd generation of pilots are to take the practice training in the Croatian Air Force squadrons and in the Pilot school in the Barracks at Zemunik, to prepare to one day join the Fighter Aircraft Squadron and fly fighter aircraft. Our best wishes for their success!