Back to homepage »
Share:
The winner of the Best Soldier Competition 2017 is Corporal Ivo Bašić, a member of the Military Intelligence Company of the Guards Mechanised Brigade, who crossed the demanding course in 351 minutes and 30 seconds. The first runner-up was Private Firrs Class Marino Protrka, […]

After the qualifications in two disciplines (shooting the VHS-D2 assault rifle and the HS 2000 pistol) held on 18 May the competitors faced the finals on 19 May at 7 am,  when they went  off for the 35-km race with 15.2 kilos of gear and weapons on through the streets of the town and the military training range “Crvena zemlja“. The competition encompassed 12 workposts where the competitors performed the set military task. As many as 150 competitors from the  Croatian Armed Forces took part, (two females), the participants from the Ministry of the Interior and more than 30 members of  NATO and partner armed forces  (Albania, Austria, Bosnia and Herzegovina, France, Italy, Kosovo, Lithuania, Macedonia, Germany, Slovenia, the United States, the United Kingdom and NATO ACO) and hence the title :“Best Soldier Competition“. The competition was conducted in three categories: the competitors from the Croatian Armed Forces, – males, the members of NATO and partner armed forces and female competitors. The Best Soldier Competition was held for the sixth time in Knin, which hosted the first competition  20 years ago; it was organised by the General Staff of the Croatian Armed Forces and by the Guards Mechanised Brigade. The Competition was held under the auspices of the President of the Republic Kolinda Grabar-Kitarović and Commanded by  Colonel Tihomir Kundid. The objective was to demonstrate the readiness, knowledge and military skills of the members of the Croatian Armed Forces and their psychological and physical abilities  to perform tasks under high physical exertion. . The 2017 competition featured the static display of the weapons and the military equipment in the operational service of the Croatian Armed Forces and of the Ministry of the Interior.in the NK Dinara sports hall. 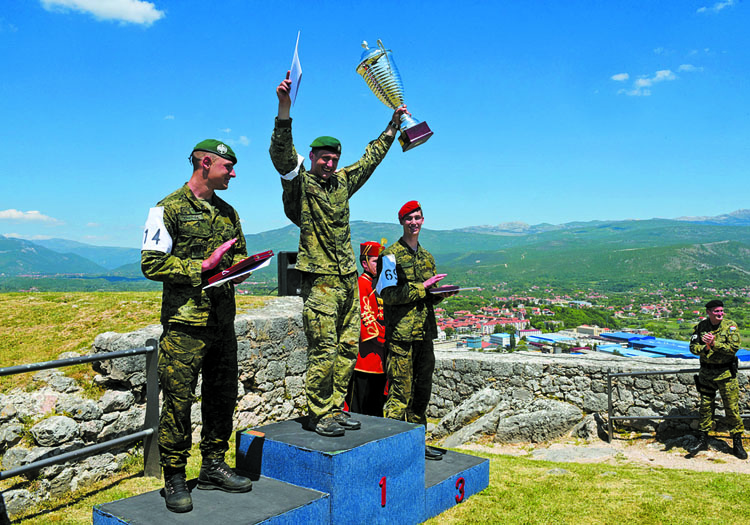 The winner of the Best Soldier Compeititon 2017

Skupnik Ivo Bašić, a member of the Military Intelligence Company of the Guards Mechanised Brigade arrived to the end point in the Knin Fortress more than an hour earlier than expected, in good mood, smiling and not looking tired at all after a 35-km course. On the contrary, he appeared fresher than the visitors and the reporters who climbed at the Fortress hardly breathing. The winner ran into the end point with his arms raised up and rang the bell to signal his arrrival, saluted the flag and then received handshakes, congratulations and  hugs. Asked to explain the excellent and unexpected score, Corporal Bašić laughs at first: “I spent too many days freezing and dehydrated here in Dinara Mountain to fail coming to the end point. And then adds: I’ve heard that I was on duty the day after so I speeded up“. He admits in the end that going quickly was also convenient to avoid peak sun hours and the heat.  For a journalist it is usually hard to talk with modest people on their big achievements or victories. They present them in a way that it appears to be quite a normal thing; they smile, shrug and know not what more to say and conclude: “It was hard, but you eventually manage it  Anything is possible when you do the effort“, just as Corporal Ivo Bašić – the Best Soldier 2017 – told us in the Knin Fortress in May 2017.

The competition is taking place in Knin, after twenty years again. This part of the ground is very demanding: we took the advantage of the military training area “Crvena zemlja“ and of the host town support. The course was 35 km long, with 12 demanding workposts. In the qualifications part held a day earlier entailed shooting from pistol and rifle (50 bullets). The score classified the competitors’ starting positions.  The next workpost was a 8.5 km military cross country race, followed by the passage of an area with an obligatory use of the protective mask and a 5-km orientation run workpost. The following posts included the handling of a rocket launcher, the assault rifle and shooting the targets; crossing the obstacles and descending the vertical net on the cliff over a waterfall. In the lower part of the training ground the competitors had to demonstrate carrying the wounded weighing 80 kilo over a 50-m course. Their following tasks were crossing the river walking a log and using a horizontal rope. The last workposts involved a highly complex task of determining the location and calling for MEDEVAC over a radio and perform logistic supply: the race concluded in the Knin Fortress.