Back to homepage »
Share:
“The Best Croatian Armed Forces Soldier“ was really hard to catch for his rivals in Knin and for the “Hrvatski vojnik“ magazine as well. Shortly after winning the “Best Soldier Competition“ and the formal ceremony on the occasion of the Croatian Armed Forces Day […]

“The Best Croatian Armed Forces Soldier“ was really hard to catch for his rivals in Knin and for the “Hrvatski vojnik“ magazine as well. Shortly after winning the “Best Soldier Competition“ and the formal ceremony on the occasion of the Croatian Armed Forces Day in Zagreb, when he received the Winners Cup from the President of the Republic Corporal Ivo Bašić took the merited leave, but found the time to take the magazine’s traditional interview with the winners of the internationally renowned military competition.

Do you practice a sport, or military skills in your free time as well?

Yes, I do: in Dalmatia trail and trekking are becoming increasingly popular, there is a trekking-trail league and condition preparing for military competitions. I also enjoy playing football, and growing up in the area of the river Cetina I take special pleasure in kayaking, canoeuing and rafting down the river with my friends.

What was your motive to take part in the “Best Soldier Compeititon“?

My family’s support and the opportunity to develop with every competition. The military procedures that make up the competition are the same that I practice in my unit.  The biggest award for me however are friendships made with the members of the Croatian and foreign Armed Forces.

You also took part in the previous competitions; what was your score?

I took my first competition in Delnice in 2013, without any special preparations, even without having dinner and breakfast on the eve of the competition. I had a bad  starting position and made mistakes at the crossroad point and on the course, so I finished it before the competition ended. In the 2014 Competition, taken in Slunj, I had made mistakes in the preparations and finished 16th, the 10th Croatian competitor. The following year I had a bad starting position but finished with a 7th place and the 6th Croatian competitor. At the 2016 competition,  held in the training range  “Gakovo”, I started as 116th competitor. At half course I was among the first ten, but made a mistake again, hasted and missed the control post, which ranked me 30th. 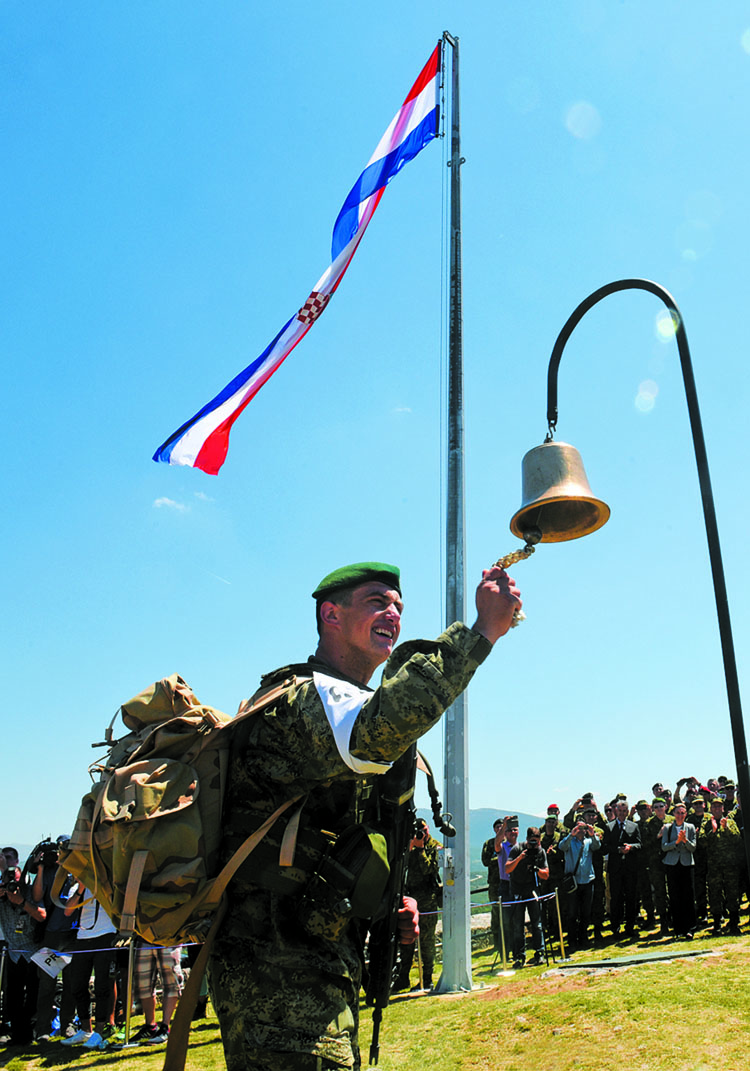 You took part in the international military competition in Ferizaj in Kosovo in late April? Can you draw a comparison between the two competitions?

The Kosovo competition took place some 20 days earlier, which was a bad timing for me as I had to take the final preparations for the competition in Knin; furthermore, the competition scheme itself was different and I had to adapt to it a few weeks beforehand. It was a two-day competition in ten disciplines, the first day involving the physical readiness testing, the shooting with M4 automatic rifle and day and nighttime  navigation. The second day the competitors crossed the obstacles, threw grenades, crossed the dangerous ground with the aid of the rope, administered first aid and scouted the terrain, concluded with a 15-km march carrying a 10-kilo ruck.  Correct performance of each discipline was worth 100 points plus the 5-point bonus for the best performance time. It was physically less demanding than the Croatian competiition but it involved skilfull tactics and concentration on each task. I ranked 2nd, scoring  two points less then the winner, a competitor from Kosovo.

Was the location of the competition an advantage? Were there any comparisons with the last  competition held there 20 years ago?

The location of the competition was absolutely an advantage.  I have been in the Croatian Armed Forces for ten years and we often have practiced at “Crvena zemlja”. Talking to other competitors later we agreed that the course may have appeared fairly easy, with the workposts aligned close to the route and with no tricks and traps, but for panting and tired  competitors it wasn’t easy, all the more it was on an unknown terrain.  It was obviously too easy for me, but I was not the only competitor from Knin – therefore it took thorough physical preparation and unimpaired concentration. Speaking of the workload, the competition conducted 20 years ago comprised a 70-km course with workposts. Anyone who applies and takes part in the competition and makes it to the end is a winner regardless of the ranking.

Did you expect to win, particularly after the qualifications?

Not really, to be honest. When you start  25 minutes after the first competitors, the 35-km seems too short to make up for the delay. The route was known to me to a certain extent, because a significant portion of it was outside the training range “Crvena zemlja”. I decided to take it “all or nothing“. After 8 km on the second workpost I ranked 9th and made it to the orienteering post 5th. The adrenaline started and  I began  to visualise myself winning, which made me press harder. The orientation task which for me was easy, I took the lead and had no reason to press hard in the larger portion of the course. In the words of Dražen Petrović: “Train hard to make the play a pleasure“: I worked really hard and eventually it paid.

Are you aware of your achievement?

I became aware of it only upon reaching the end point to the sound of trumpets and on seeing the stage and my family who were expecting me. They gave me utmost support during the preparations, the good and the bad moments. I have to appreciate the effort from my unit and the colleagues from the Company. When you enjoy such support you cannot really just say „Participation is important“; you have to do your best. I have realised that the success of the kind brings joy and satisfaction but also responsibility and the obligation to build my contribution into the reputation of the Croatian Armed Forces.

Do you intend to go on competing?

After taking part in five consecutive competitions it is now hard to tell whether I am going to take part next year too, so I am leaving that question open. I will definitely have the support from my unit, but I want to spare my family the sacrifice. They are my biggest trophy. 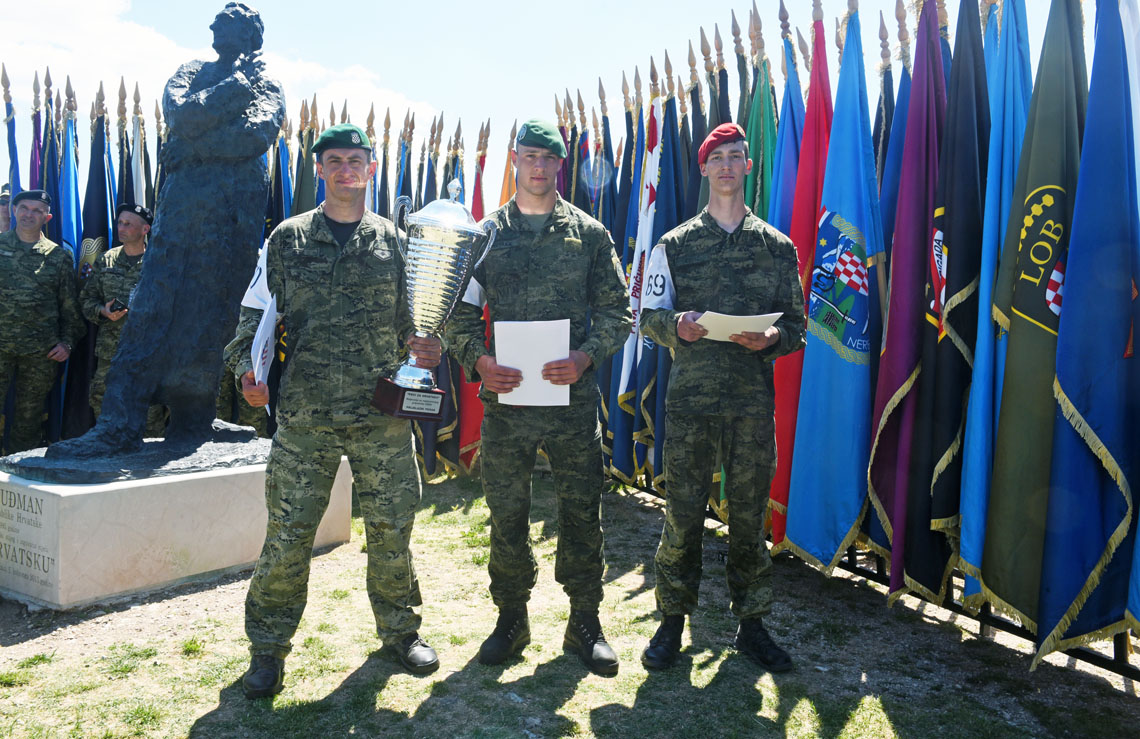 What was your motive to become a Croatian soldier?

When I completed the regular military service I recognised myself in the military career but it took me some time to make a final decision. I took the selection boot camp and then remained in the Armed Forces, motivated by the opportunity to progress and develop your abilities.

How is your career progressing and what are your plans for the future?

My present post is the Head of Electronic Warfare Team of the Military Intelligence Company based in Knin.  It is difficult to make long-term predictions in this profession, but I intend to remain in the post. Our Company has excellent instructors in all domainsand I still have much to learn to become able to pass on my expertise to the young members. I have to say this too: since joining the Croatian Armed Forces I was  been a member the Engineer Battalion of the Guards Motorised Brigade based in Knin, as engineer scout, where I acquired basic experience with the reconnaissance; during that period I took part twice in the Best Soldier Competition, and I some of the credit goes to the Battalion, and I am taking the opportunity to thank them publicly for all the time spent together with them and for all skills they helped me build.