Back to homepage »
Share:
The Croatian Armed Forces as a component of the Homeland Security System spent two days  assisting the City of Zagreb and the citizens with the repair of the damage  inflicted by the earthquake that hit the capital 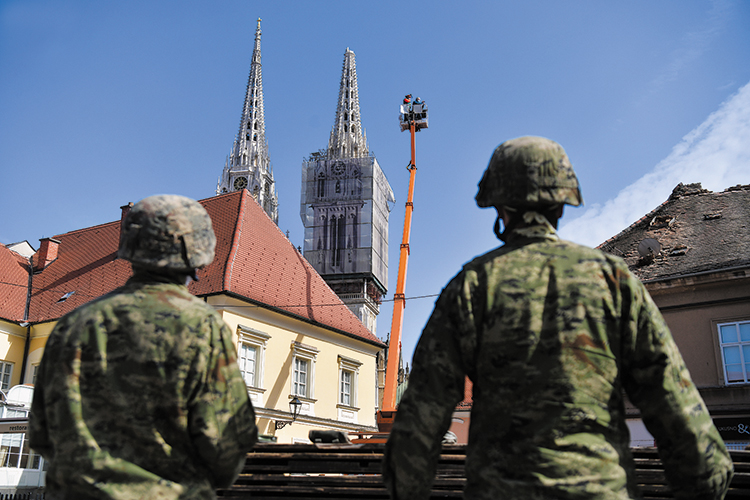 The Croatian Armed Forces were called in ten minutes following the earthquake, at 6.30 were put in the highest readiness state, and the very next moment a total of 150 members headed towards Zagreb.

Operating in coordination with the authorities of the City of Zagreb, some 420 members of the Croatian Armed Forces cleared the roads and sidewalks, and assisted for two days the hospitals hit by the earthquake, with the aid of ten engineer machines.

The Croatian Armed Forces as a component of the Homeland Security System spent two days  assisting the City of Zagreb and the citizens with the repair of the damage  inflicted by the earthquake that hit the capital on 22 March 2020. Measuring 5.3 on a Richter scale it was the strongest earthquake in the past 140 years ic of Croatia, as a function of the need to implement measures to protect the citizens of the Re, damaging numerous housing, culture and sacral buildings in the city centre.  They used ten engineer machines (loaders and tipper lorries).

“The Croatian Armed Forces are well-organised, ready and highly motivated  assist the Croatian people when needed most. Immediately after the earthquake 150 members of the rapid response force headed to Zagreb.

Immediately on arriving to the centre of Zagreb, we realised the dramatic impact of the earthquake. We set to work and started clearing the debris in the centre, from the Ban Jelačić Square, dispatching the forces into the adjacent streets. Based on our first estimates we planned a two-day clearing operation. However, our primary task was to clear the roads and sidewalks to restore normal life in the town”, said the Chief of Staff and Deputy Commander of the Croatian Army, Brigadier General Tihomir Kundid.

Trust in the Croatian Armed Forces 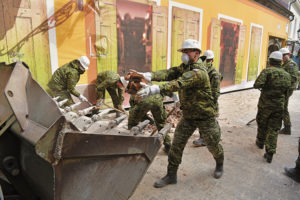 A total of  170 members of the Croatian Armed Forces were engaged clearing the main roads in the centre of Zagreb – in the Upper Town, along the streets in the centre of the town, and assisted with repairs on the Law School of the University of Zagreb.

“Our priority was to clear the main streets in the centre of Zagreb, and we completed that within a record short time. We will continue with clearing the ruble to ease the situation for the citizens“, said the Commander of the Guards Mechanised Brigade Colonel Dražen Ressler.

Among the soldiers clearing the streets of Zagreb was the Commander of the 1st Motorised Platoon of the Guards Mechanised Brigade, 2nd Lieutenant Mihovil Šarić, who shared his own and his colleagues’ high motivation to handle the damage inflicted on Zagreb within the shortest term possible.

“We are going to work as long as it takes, around the clock if necessary. We are motivated and ready to assist, which is just what I expected from us Croatian soldiers, and I believe everything will turn right in the end. These are hard times, but there is no reason to fear. The Croatian people is known to demonstrate its greatest strength in hardest moments. We can do everything together”, said 2nd Lt. Šarić.

On 23 March the Support Command personnel were  engaged too, at the request of the City Office of Emergency Management, providing support to the Public  Fire Brigade of Zagreb clearing the debris on the housing buildings in Jurjevska ulica.

The Defence Minister Damir Krstičević and the Chief of the General  Staff Admiral Hranj visited the soldiers and thanked them for assistance and solidarity provided to the citizens of Zagreb.

General Kundid thanked all components of the Homeland Security System for their engagement, stressing  “The citizens did show fear but did not panic and were very disciplined,  there were only the residents around, who obeyed to the warnings and suggestions from us and from the police. They were aware of the situation and did not want to put themselves in danger again. ”

Some 15 members of the General Logistic Support Battalion of the Support Command on 24 – 25 March 2020 were called in to assist the Monastery of St. Francis of Assisi in Zagreb damaged in the earthquake, evacuating the library and archive that were damaged too.

The Franciscan monastery at Kaptol is one of the oldest ones in Croatia, and its founding is allegedly connected with the visit of Saint Francis to Zagreb.

Fr. Mate Bašić said the damage was a life hazard, as the belfry  might collapse.

“The Croatian Armed Forces are evacuating our monastery, placing the 50 friars at safe, and rescuing the property and library to enable the sealing of the Monastery and repair“, said Fr. Mate Bašić.