Back to homepage »
Share:
The CAF are included in the operation of the Infirmary opened in the Arena Hall in Zagreb, intended for COVID patients discharged from the hospital but still in need of care. The Commander of the Task Force is Lieutenant Colonel Berislav Dalić

Presently the fully equipped hospital beds are still empty and the entrance to the Arena is strictly guarded.  Only a special accreditation allows us the entry to the Infirmary, where we were welcomed by Lieutenant Colonel Berislav Dalić, a neurologist of the Clinical Hospital “Sv. Duh” in Zagreb, and now the Commander of the Croatian Armed Forces Task Force assisting the national medical system, as the Arena Hall has been rearranged as Infirmary, under the responsibility of the University Hospital Centre “Sestre milosrdnice”.

The accreditation, which early this year admitted Arena visitors in VIP lounge to enjoy top music and sport events this time took us to see the presidential and VIP lounges with altogether different purpose. However, before entering the facility and the lift to the second floor of the Arena which has been arranged to accommodate the medical staff when the Infirmary is put to use there is another check point.  A special device at the entrance to the lift measures temperature, disinfects the hands and ere is a special device that measures the temperature of each visitor, disinfects his hands and also scans each entry.

“In addition to the accreditation requirement, entry to Arena is only allowed to the persons on the list. We insisted on double checking because the Arena Infirmary is a considerable security challenge.  Unauthorised entry can have serious effect.  We have adjusted everything to the level of risk of epidemiologic and other threats”, explains Lt. Col. Dalić taking us for a tour of the Hall on the second floor, designated for the authorised personnel if the Infirmary is activated.

The third floor, with the capacity of 100 hospital beds with direct oxygen supply that can be extended to accommodate 270, the laboratory, the radiographic unit and the diagnostic room were disinfected, sealed and closed until the activation of the Infirmary.

The infirmary is organised and equipped to provide care for the persons with mild-to-moderate condition, discharged from the hospital but still in need of medical care. It admits the patient under the respective agreement with medical institutions, to disencumber the hospitals. On entry the patients receive a bar code wristband and medical teams take them in.

“We are at high readiness level for patient admission, which only waits for the Minister of Health’s decision, maybe even today. Considering that many patients have been admitted to hospitals so far, our hospital may take in the first patients tomorrow. Our readiness is 24/7, so if the Minister decides so, we all get here, take the preparation procedures and admit the first patients within 24 hours”, says Lt. Col. Dalić.

The Croatian Armed Forces Task Force comprises three components. The first component is the Operational Headquarters of the Arena Infirmary, comprising the numerous staff of the University Hospital Centre “Sestre milosrdnice”, the Medical Advisor to the Chief of the General Staff of the Croatian Armed Forces Major General Boris Zdilar, and Lieutenant Colonel Dalić, the Commander of the Medical Task Force, his deputy Lieutenant Colonel Ante Jažić of the Military Medical Centre, the operational NCO Sergeant First Class Davor Joha of the Engineer Regiment of Karlovac, and the Task Force co-ordinator Staff Sergeant Snježana Barbir of the Office to the Medical Advisor. 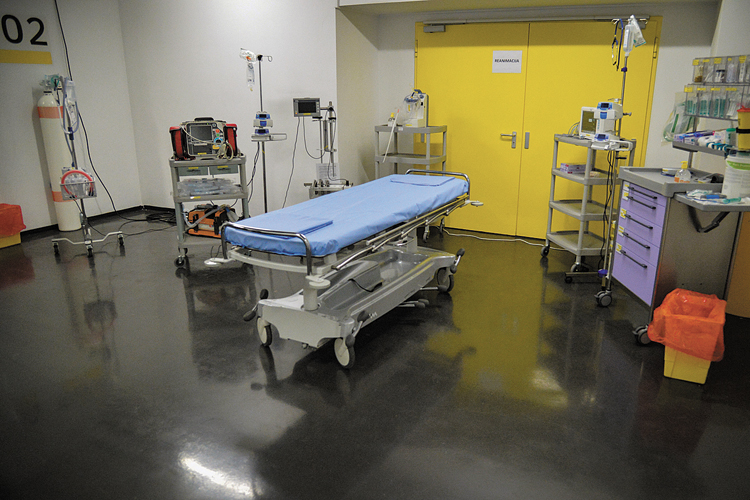 The second component of the TF is at the implementation level, and is composed of medical staff of the Croatian Armed Forces (three physicians and six l technicians, while the third component consists of a logistic team of six soldiers, assigned with support tasks.

“The six soldiers will not enter the contaminated zones at any time, they will work in clean areas only”, said Lt. Col. Dalić. The second and third components – a total of 21 members – will rotate at 2-weeks basis, to resolve epidemiologic incidents and reach the contacts. The personnel will be provided with the accommodation during their rotations.

Regarding the medical staff, doctors from the Croatian Army will operate within their area of​​ responsibility, alongside the medical specialists from University Hospital Centre “Sestre milosrdnice” in Zagreb, and so will medical technicians.