Back to homepage »
Share:
The members of the Croatian Armed Forces have repeatedly displayed their capability to cope and offer solutions for various challenges and tasks 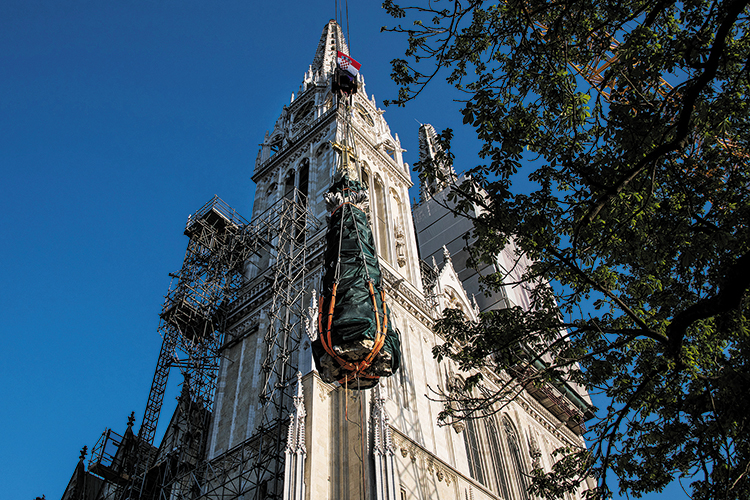 The members of the Croatian Armed Forces have repeatedly displayed their capability to cope and offer solutions for various challenges and tasks. Their importance during the Homeland War will be the talk of the generations to come, and their contribution to the removal of the north spire of the Zagreb Cathedral will remain a historic achievement too.

After the damage inflicted on the Cathedral by the strong earthquake hitting Zagreb on 22 March 2020, the necessity was realised to repair the north spire due to the risk of the collapse and threat of causing serious damage for the cathedral and the surrounding area.

The Canon of the Cathedral Chapter of Zagreb Msgr. Hren explained that on seeing the footage of the damage at the cathedral, structural engineers were engaged and it was concluded that removing a part of the north spire was much the preferred option to leaving it fall and endanger the entire construction. Both spires, which were a part of the overall reconstruction project by Hermann Bolle, were on the same elevation and the earthquake revealed their vulnerability.

Mr. Damir Foretić, the supervising cathedral restoration engineer explained that two 30-mm steel rods were threaded through the spire down from the tip and that problem occured with the parts of the lantern that broke off and the spire rotated by 12 to 15 cm.
The 15m3 travertine stone spire weighing 30 t was removed using a crane with a 120-m long arm.
Aware of the importance of the urgent repair of the northern tower, the Cathedral Reconstruction Monitoring Committee of the Zagreb Archdiocese, headed by Msgr. Ivan Hren, requested the assistance from the Croatian Armed Forces with the removal of a part of the northern spire, which was a highly demanding and hazardous task, executed at the height of 120 m and involving the removal of a 30-t load, said Msgr. Hren.

The Croatian Armed Forces had a multiple role in the repair works of the north tower executed on 17 April 2020: in addition to four members of the Engineering Regiment of the Croatian Army headed by the Chief of Staff of the Regiment Lieutenant Colonel Miroslav Car and the members of the Military Intelligence Company headed by Commander Major Mario Maslov. 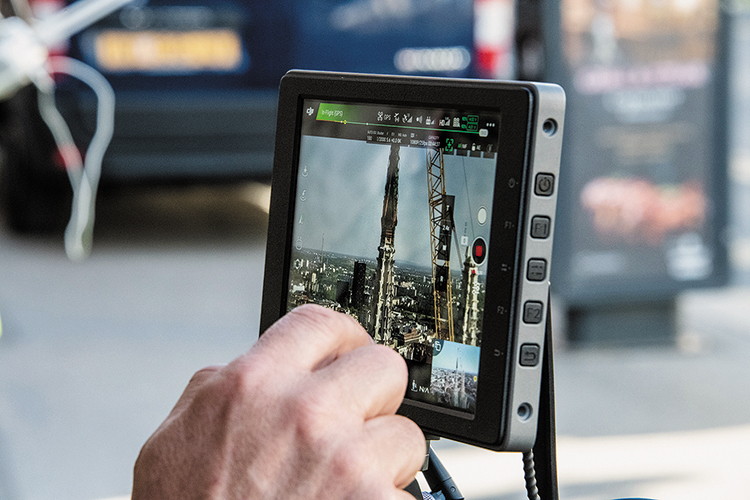 Other personnel engaged in the project included the construction experts, architects, statists, climbers and the teaching staff of the Faculty of Mining, Geology and Petroleum Engineering.

Lt. Col. Car and Major Maslov said that they had believed in the success of the project and explained its historic importance.

The 72nd storey of the north spire was damaged in the earthquake, which caused rotation of the upper part and cracks in the bearing walls in the lower part .

The final operations had to wait for the calming of the wind, and the spire was therefore lowered shortly after 6 pm.
“The members of the Engineering Regiment were assigned with mining, drilling and connecting the microholes into a network. The contractors then fastened the straps to the wire cables, and peformed detonation with a minimal quantity of explosives. It was preceded by a series of test minining around the Cathedral and in the military training range to determine the optimum quantity of the explosives.

“A minimum quantity of explosives (580 g) was used. We isolated the blasting area to prevent the crevasses from widening, but the calculations showed that the safety zone was about 75 meters from the blast site, “said Chief of Staff of the Engineering Regiment. Lt. Col. Car said the Engineering Regiment and the Croatian Armed Forces were always ready to execute the most demanding tasks. We have systematically conducted training and honed our skills anticipating the most complex tasks and hardest conditions. „“ It is a part of our job and we were ready for this assignment too. There was some tension about the task, instilled by the wish to perform it in the best of ways as well as by the responsability“, said Lt. Col. Car proudly.

The Military Intelligence Company was assigned with UAV 360° surveillance of the works. 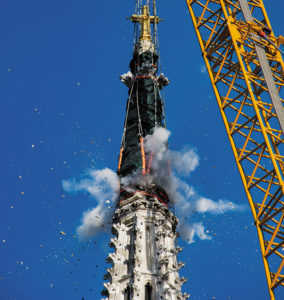 “To perform the controlled detonation and the demolition of the junctions between the 72 nd and the 73rd storey of the Cathedral we needed reliable aerial and side scanning of the spire removal for subsequent analysis of the course of the procedure . Three aircraft were filming the procedure, which was a highly demanding task both for the pilots, who had to hover close to the cranes and the spire and close to each other too, and for the spotters on the ground. The Croatian Army proved again to be ready and capable of contributing to the community and help the people when asked to.

Sergeant First Class Krešimir Marjanović, member of the Croatian Army’s Engineer Regiment assigned with assembling the explosive onto the steel rope of the weight in the lower part of the north spire, will remember each detail of the project.
“We used concentrated charges, relying on our calculations and the assistance from the Faculty of Mining, Geology and Petroleum Engineering, who performed test procedures in their laboratories and we also conducted a few tests on the ground simulating real-life conditions. Our unit basically operates on the ground, and although removing the spire was conducted in extreme conditions, we concluded it efficiently and without collateral damage, using the protective equipment“.

The Croatian Deputy Prime Minister and Defence Minister Damir Krstičević congratulated all participants, comprising private firms, climbers, the police and the Croatian Armed Forces – especially the Croatian Army – for the succesful spire removal operation: “You are a symbol of the strength, capability and patriotism, which are strongly appreciated!“.

“The operation was most demanding and complex, at times dramatic, but all participants demonstrated to be fully capable of performing their own tasks“.

“The operation was quite dramatic at moments. It was demanding and complex and all participants showed capability to execute their parts”.

The Croatian Prime Minister Andrej Plenković: One of the symbols of our Christian identity will regain its full splendour

The Croatian Prime Minister Andrej Plenković also extended a message of support and appreciation to the members of the Croatian Armed Forces for the successful completion: “I wish to congratulate the members of the Croatian Armed Forces ans the Ministry of Defence, the engineers and everyone who participated in the removal of the northern spire of the Zagreb Cathedral to prevent it from collapsing after the earthquake. Once restored, one of the symbols of our Christian identity will shine again in full splendor”.