Back to homepage »
Share:
The newly opened barracks in Pula will host ca 140 members of the Croatian Armed Forces, comprising the new  Unmanned Aerial Systems Centre 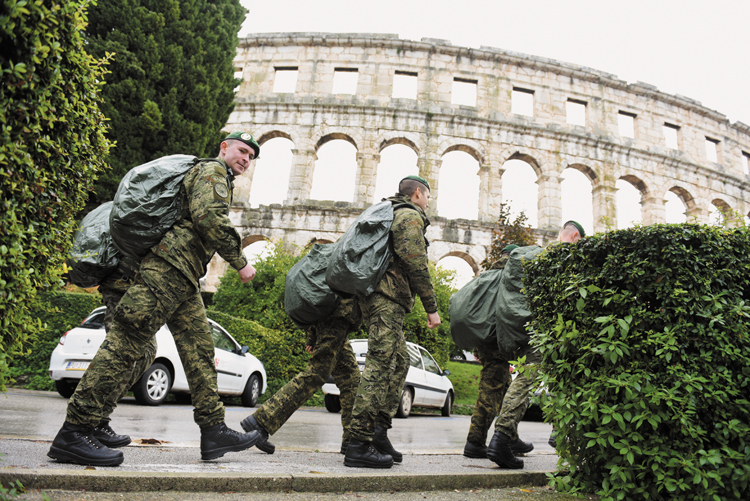 The formal opening of the barracks “Croatian Defenders from Istria”  in Pula on 15 November  2019 concluded the project of the return of the Croatian Armed Forces to their former bases  – in Sinj, Ploče, Varaždin, Vukovar and Udbina – all places of particular significance in the Croatian military tradition, especially in the Homeland War.

In the light of the changing  security environment and a more effective response to new security challenges, the return of the Croatian Armed Forces to the towns pertains to new operational distribution of the units of the Croatian Armed Forces, focussed on enhanced security throughout the territory, the assistance to the local population, improved  living, working and training standards and on the promotion of military profession and preservation of values of the Homeland War.

A large part of the engineering works has been conducted by the members of the Croatian Army themselves.  The accomodation and training facilitiy has been renovat, the dining facility, the water-supply, the roads, parking spaces and heating facilities and sports grounds. 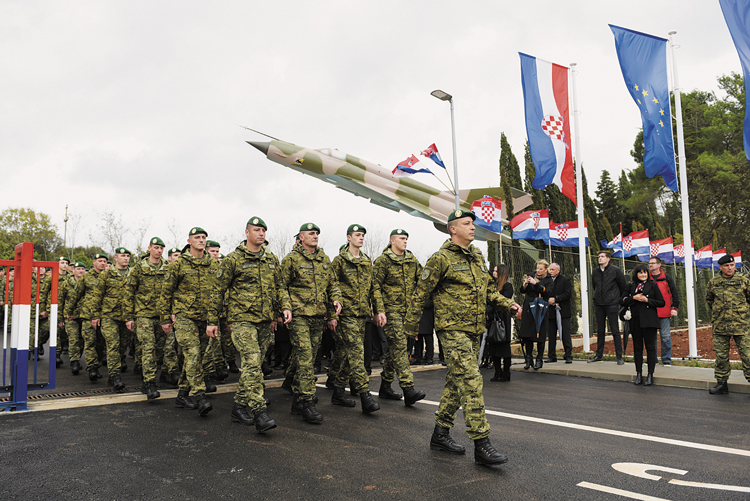 The name of the Barracks honours the Homeland War and the Croatian defenders from Istria and their huge contribution to the defence of the homeland. A memorial air monument was placed within the Barracks to commemorate the heroic feat of the pilot Danijel Borović, who in February 1992 overflew from the JNA Air Base Željava  to the 92nd Air Base Pula, defying obstacles.

The establishment of the Unmanned Aerial Systems Centre is of strategic importance for security and defence of Istria, says Major Mravunac:  ”The return of the Croatian Armed Forces to Pula creates  military service and job opportunities for the young  educated people. The Centre organisation entails a significant potential for intensified co-operation with NATO and the EU,  and for the military and civilian industry.

Major Nikola Mravunac, the Commander of the Unmanned Aerial Systems Centre is one of the members to whom the return to Pula means more than a new job. He moved to Pula in 2004 and joined the 22nd Fighter Squadron at the 92nd Air Force Base. After the relocation of the Base in 2012, Major Mravunac was rebased to Zadar whereas his wife stayed in Rovinj with their children.  : “Since then, I have shuttled from  Rovinj to Zadar and back and have had to balance the work and the family. With the return of the Croatian Armed Forces to Pula I am back home too”.

The Unmanned Aerial Systems Centre comprises an Orbiter 3B  unmanned aerial vehicle  – a  new asset in the Homeland Security System used for the needs of the Ministry of Defence and for the Ministry of Agriculture.

“The primary goal ofthe  unmanned aerial systems is to execute fisheries control and surveillance. The Croatian Armed Forces use the system for support to the civilian institutions, for search & rescue missions, fire protection etc. The Orbiter 3B contains numerous civilian and military capabilities to use within Homeland Security System; it has found use in early detection  of fires from large distances, in control of waterways and road communications, and also in support during crisis situations and control of the state border”, says Deputy Commander of the Unmanned Aerial Systems Centre Major Božo Kriletić.

In addition to the ceremony held in the Barracks a static display of the weapons and equipment used by the Croatian Armed Forces  was set up in front of the Pula Amphitheatre and toured by numerous visitors, comprising the Croatian Navy’s Patrol Boat OB-03 “Cavtat”, Patria and MRAP combat armoured vehicles, a M-84 tank,a PzH-2000 Howitzer , a HMWVI, a  tEODor robot, a decontamination station, military uniforms, pistols, machine guns , snipers, grenade launchers, diving equipment, alpine equipment, parachute equipment and the like.

The citizens enjoyed watching an overflight by an OH-58 D Kiowa Warrior helicopter of the Croatian Air Force over the Amphitheatre.

The Honorary Battalion performed a military acrobatic drill procedure and the Jazz Band of the Croatian Armed Forces performed a concert in Dom HV.

The return to Pula was marked symbolically with a two-day march of a hundred members, kicked off on 12 November with a line-up in front at Žminj. After months-long renovation of the Barracks “Croatian Defenders from Istria“ our unit has won the affection of the residents of Istria; the march from the heart of Istria is a bond between the Croatian Armed Forces and Istria“, said the Commander of the Intelligence Regiment of the General Staff of the Croatian Armed Forces Lieutenant  Colonel Zvonimir Rogić.

On the first day of the march candles were lit at the grave of the Blessed Miroslav Bulešić and of the fallen defender Dušan Bulešić and toured the Grimini Castle.  They were impressed by the visit to the Church of St. Blaise in Vodnjan, where relics of 250 Christian saints are preserved.

On the second day the participants marched from Galižana to Pula, where they laid wreaths at the memorial to the fallen veterans of the Homeland War and in the Pula cemetery, along with the representatives of veterans associations and representatives of the City of Pula. The march concluded on the arrival to the new home – the Barracks “Croatian Defenders from Istria“.

The Chief of the General Staff of the Croatian Armed Forces General Mirko Šundov:

The  Mayor of Pula Boris Miletić:

“I believe that the  Unmanned Aerial Systems Centre  will be effective in civilian use and activities and that highly educated staff from all over Istria will have employment opportunities.”

“I am sure that the Barracks” Croatian Veterans of Istria “and the wider area of ​​the former air base will be an example of successful co-operation between the central government  and local government. The opening of the Barracks is an additional incentive to the economy of Istria”.