Back to homepage »
Share:
“The Croatian Army is being equipped with completely new utility helicopters, which are among the finest in the world. The year 2018 thus truly becomes a turning-point in the development of Croatian Air Force’s capabilities, which fills us with pride. When the Croatian Army celebrates the 30th anniversary of its establishment in 2021, its air fleet will consist of Israeli aircraft F-16 and Black Hawk helicopters. That will be a confirmation that the Croatian Army has grown into a modern military force”, Minister Krstičević said 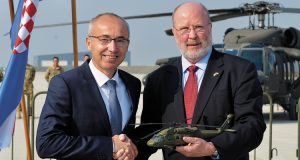 Utility helicopters Black Hawk UH-60M were presented to the public in Barracks “Pukovnik Mirko Vukušić” in Pleso on 12th October. Such aircraft are already in use in the United States Army and similar ones will join the Croatia Army’s air fleet in 2021, thanks to a donation from the United States Government to the Republic of Croatia. The donation is worth 53 million dollars and includes two completely new helicopters from American manufacturer Sikorsky’s workshop, equipment and spare parts as well as training for pilots and technical staff. Croatia thus joins other 30 countries whose air fleets include Black Hawk.

“After the Croatian government’s historic decision to procure multirole fighter aircraft F-16 and Kiowa Warrior helicopters, The Croatian Army is being equipped with completely new utility helicopters. These helicopters are among the finest in the world and are popularly called “workhorses” due to their efficiency and endurance. The year 2018 thus truly becomes a turning-point in the development of Croatian Air Force’s capabilities, which fills us with pride. When the Croatian Army celebrates the 30th anniversary of its establishment in 2021, its air fleet will consist of Israeli aircraft F-16 and Black Hawk helicopters. That will be a confirmation that the Croatian Army has grown into a modern military force”, Minister Krstičević said.

Minister Krstičević also pointed out that the investment is a further proof of a sincere alliance and strategic partnership between Croatia and the United States, while the addition of the Black Hawk to the Croatian Air Force’s air fleet significantly improves its helicopter capabilities as well as the technological capabilities of other branches of the Croatian Army.

“The investment from the United States marks the first step in replacing the helicopters of eastern platform currently in use with those of western platform. For us, as a reliable and trustworthy member of NATO, the transition to a western platform is the only possible and correct path”, Minister Krstičević concluded.

Ambassador Kohorst said that these helicopters were the most technologically advanced lift helicopters in the world and that they supported the two countries’ common commitment to defending each other and working together to make the world safer and more stable.

“The donation is a sign of the United States’ commitment to preserving our strategic partnership and achieving shared security objectives. These helicopters will start the transformation of the Croatia Air Force to a western helicopter platform and enable Croatia NATO interoperability for many years to come”, Ambassador Kohorst said. 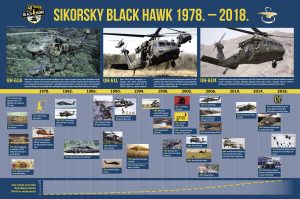 General Šundov said that the donation of those two helicopters was a proof of excellent bilateral cooperation between the Republic of Croatia and the United States of America, and concluded: “Introducing these helicopters into operational use will enable the development of new capabilities in the Croatian Air Force and the Special Operations Command. This day marks the crossing from an eastern platform to a western one and increases interoperability of the Croatian Armed Forces with allies and partner nations.”

The main trait of Black Hawk helicopters, named after the chief of the Sauk tribe (1767 – 1838), is versatility. It is a multifunctional helicopter in the true sense of the word; along with traditional military tasks, it may also be utilised in helping civil institutions in tasks such as extinguishing forest fires, search and rescue operations, emergency medical transportation, etc.

It is interesting to note that Lockheed Martin, which bought the aircraft manufacturer Sikorsky three years ago, is celebrating the Black Hawk’s 40th birthday in 2018. The first UH-60A, intended for delivery to the US Army, had its first successful flight in 1978. However, the UH-60M, which was seen at Pleso and which is expected to join the Croatian Army, vastly differs from its predecessor. It has passed the most difficult test and has proven its value in operations. It is also significant that these helicopters can have their systems and capabilities upgraded, i.e. they can be modified in accordance with future missions and demands.