Back to homepage »
Share:
The Croatian Navy’s Dubrovnik gun-missile boat recently returned to Croatia after having served as a platform for the 32-strong 2nd Croatian Contingent in Sea Guardian, NATO’s operation in the central Mediterranean, throughout September… 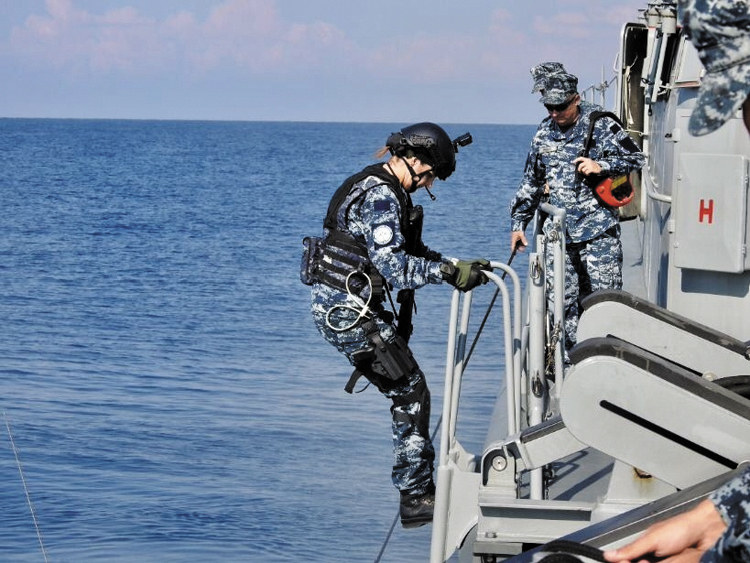 After the completion of the pre-deployment training, medical examinations, many sacrifices and exertions, a lot of studying and a successful final evaluation of the crew and their vessel, the day of the deployment of the 2nd Croatian Contingent in Sea Guardian finally arrived. All the members of the contingent were tense, but also proud of what they had accomplished and of what they would yet accomplish following their departure on a demanding mission in which they would demonstrate their knowledge, skills and capabilities as well honourably represent their homeland in an international environment. They were deeply moved by the presence of their loved ones at the send-off ceremony as well as their superiors’ promise that their loved ones would be taken care of. Deployment is easier to withstand if one is sure that their family will be taken care of, especially if a crew member’s child is starting school or if a boatswain is expecting a child.

Accompanied by the sounds of a fog horn and a march performed by the Croatian Navy Band, the RTOP-42 Dubrovnik gun-missile boat sailed off to the area of operations from Port Lora in the coastal city of Split. The fair weather during transit and on patrols allowed the crew to practice all the activities planned for their tour of deployment. Seeing as how crews on vessels must be acquainted with the water area they are in and aware of their surroundings, the Croatian crew followed a Brazilian navy vessel sailing towards Split for a visit to the Croatian Navy. Simultaneously, they created the situational image, checked the communication lines and practised standing procedures in case of fire, ingress of water or malfunction. While awaiting new professional challenges, everyone was overcome by a rush of unity and desire to carry out the mission to the best of their abilities. The sailor’s high morale was boosted by several factors: excellent preparation during comprehensive pre-deployment training, good living and working conditions on the vessel and – the last but not the least – the possibility of occasional communication with the loved ones. Although the vessel was equipped with satellite communications, it was agreed that these would be used only to serve the needs of the mission and in case of emergency.

As is often the case in life, the weather turned for the worse, the sea became effervescent, but land was nowhere in sight. Yet, the sea dogs aboard the RTOP-42 Dubrovnik were not in the least discouraged. Their mission was a priority for them and they refused to drop their guard. Already in the first few days of their tour, they established superb co-operation with maritime patrol aircraft that served as their eyes far beyond their horizon.

After spending several days at sea, the crew rested in the port city of Catania while their vessel was refuelled. However, the crew did not have the time to rest properly as they had to plan an exercise involving an interception of a merchant vessel. The fact that a merchant vessel was taking part in such an operation for the first time gave weight to the activity, the objective of which was to increase security at sea. A particular challenge for the contingent’s members was the fact that the exercise was taking place in real time. Due to the extremely bad weather in the Strait of Sicily, it was decided that the merchant vessel would be intercepted 250 nautical miles south-east of Catania. The vessel was en route to the coast of Spain from Cyprus and the Croatian contingent received confirmation about its position, course and speed from maritime patrol aircraft. The Dubrovnik sailed off to intercept the merchant vessel in the early morning, before sunrise. En route to the meeting point, facts were verified and significant details were planned out. In the early morning hours of the next day, the Croatian crew spotted the vessel and sounded an alarm, thus beginning the exercise. Such exercises are intensive and take place continuously. One must anticipate many unwanted situations with countless outcomes, such as a member of the transfer team falling into the sea while carrying 30-kilo equipment. Although the crew are trained for medical evacuation of casualties by helicopter, mishaps may affect their actions and thinking, so their vigilance and professionalism must be amplified. 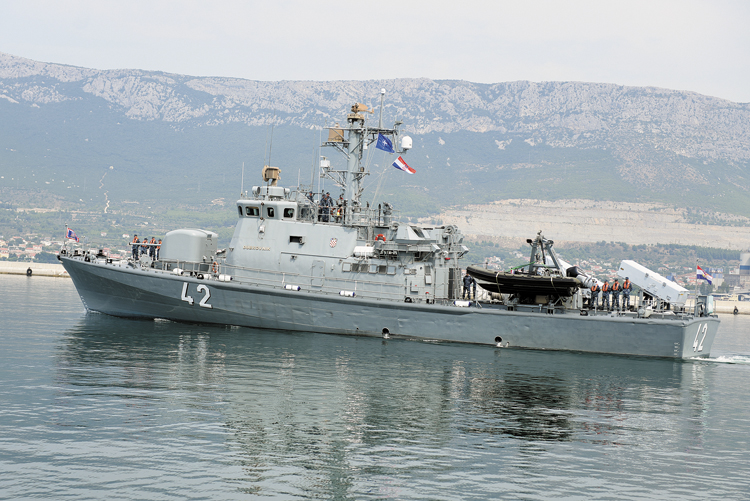 The impeccable execution of the exercise proved the crew members’ readiness, knowledge and skills. The crew aboard the merchant vessel, especially the ship security officer, expressed their satisfaction with the exercise, adding that sailing international waters was easier if there was somebody watching over them. The increased sense of security at sea once again confirmed the Croatian sailors’ excellence and filled them with pride.

The second part of the exercise entailed an explanation of and a brief training in efficient methods of protecting the so-called vulnerable vessels – low-speed, low-freeboard vessels that can be easily endangered by pirates. The crew aboard the merchant vessel also practised taking shelter in a citadel – a safe space used if repelling an attack is not possible. After completing the training as well as receiving acknowledgements for the co-operation and good wishes for a safe journey, the Croatian contingent sailed off westwards, to the water area north-east of Malta. So as to create a coherent situational image, they made contact with transiting vessels during their voyage, introducing their crews to operation Sea Guardian and giving specific directions on how to respond to observed irregularities at sea.

In spite of continuously demanding tasks, one thing the Croatian crew looked forward to the most was brief communication with their loved ones. After being reassured that everything was alright back home, they were once again overcome by a rush of adrenaline propelling them to complete their mission.

Malta’s water area is quite an attraction. It is the only place in the Mediterranean where vessels can be anchored while formally remaining in international waters. Anchoring is made possible because of the shallowness of the sea and its sandy bottom. Every day, 30-50 vessels are anchored there, transhipping cargo or awaiting their next assignment. The presence of many vessels can also be a cause for irregularities, so being anchored in Malta was an excellent opportunity for our contingent to identify, gather evidence and report to their superiors about potential unauthorized cargo transshipment, the dispatching of false data via the Automatic Identification System (AIS), the flying of an inappropriate ensign or a lack of an ensign on a vessel, etc. Particular attention was paid to vessels identified as having previously participated in illegal activities. As one vessel checked off all of the aforementioned boxes, the contingent began to plan transfer to it. For several days, they gathered as many data as possible about the vessel, the crew aboard it, its course before the arrival to the anchorage, previous ports of contact and the cargo it was carrying. Before determining a place suitable for transfer without a ladder, the plan had to be worked out in detail (e.g. the height of the vessel’s freeboard had to be calculated using its draught marks as the only known variable). While sailing towards the Sicilian harbour of Augusta for previously arranged refuelling, the Croatian crew awaited an order from the superior command, knowing there was plenty of time before the planned transfer.

And yet, the superbly planned action was aggravated and thwarted by bad weather and slight to moderate state of the sea at the anchorage. During their stay in Augusta, Croatian sailors checked several sources for the weather forecast. They were given the green light by their command once the weather forecast permitted the mission to be executed in a short time frame between 10 a.m. and 1 p.m. the following day. The crew, especially the transfer team, used the time while their vessel was being refuelled to go over the plans and rest. The Dubrovnik gun-missile boat sailed into the action at 4 a.m. The crew was not disheartened by the bad weather, which improved as the vessel approached its target. The crew initiated the standing procedure for such actions. During initial contact, they learnt that the target vessel was rafted to a replenishment tanker. As refuelling would take two hours and the weather forecast was unfavourable, key personnel met to plan out alternative courses of action. After patrol aircraft supporting the Croatian contingent had confirmed that the replenishment tanker had departed, the transfer team could begin their mission, which they completed while obeying all combat security measures. On the grounds of previously collected data about the unenviable position that the target vessel’s crew had been in for some time, it was decided that a donation consisting of food-stuffs, first aid kit and tools would be sent to their aid. The intention of the humanitarian gesture was to improve co-operation with crews in dire straits. The contingent members’ pride and pleasure over the successful completion of their tasks was augmented by congratulations from superior commanders both in their home country and in the operation.

The best, however, followed upon the return home. At full speed, the Dubrovnik gun-missile boat sailed towards its next destination – the coastal city in Croatia it was named after. The members of the 2nd Croatian Contingent in Sea Guardian, along with other personnel of the Croatian Navy and their guests, were joyously welcomed in the city that heroically withstood Croatia’s Homeland War of Independence (1991 – 95), where they celebrated the 28th anniversary of the Croatian Navy’s establishment.

The 2nd Croatian Contingent in Sea Guardian and the Croatian Navy’s RTOP-42 Dubrovnik gun-missile boat were engaged in NATO’s operation in the central Mediterranean from 30th August to 18th September 2019. The contingent was commanded by Lt. Com. Stipe Mornar, while Lt. Ante Uljević acted as shipmaster.

By deploying a Croatian Navy vessel to the operation, the Republic of Croatia contributed to allied efforts in establishing joint security at sea. The Croatian vessel covered the area of the central Mediterranean from the west coast of Sicily to the coast of Tunis and Malta. The contingent’s tasks included creating a coherent maritime situational image, identifying and tracking potential threats as well as unearthing unauthorized exchange of data.

During its tour of service in the Mediterranean, the Dubrovnik gun-missile boat sailed over 3,500 nautical miles and a Croatian transfer team was transferred to a dubious vessel listed as being of special interest. Other activities included transfer on a merchant vessel with the objective of increasing security at sea and highlighting the importance of co-operating with the merchant navy. Furthermore, the contingent patrolled and monitored activities of vessels in the area assigned to them, located vessels, trained with another vessel and exchanged data with the superior command and other subjects in the area of operations, especially maritime patrol aircraft, on a daily basis.