Back to homepage »
Share:
The members of the Croatian Armed Forces from various units took part in the international military exercise Cyber Coalition, conducted at tens of locations in the member nations, under the direction of the Cyber Space Command 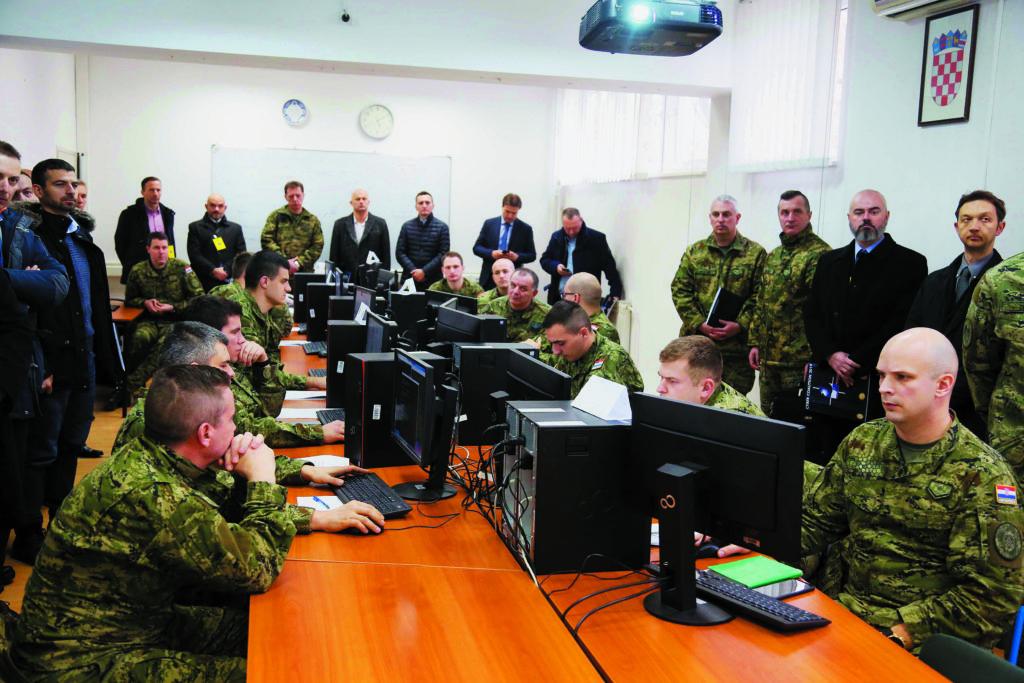 The 2019 Cyber Coalition – one of the best known and largest NATO cyber defence exercises – was organised by the Allied Command of Transformation at various locations in the member nations from 2 – 6 December. The Croatian Lead Unit for the Exercise was the recently established Cyberspace Command of the General Staff . The 2019 Exercise gathered more than 1,000 participants from 27 NATO member nations and partner nations, and representatives of the industry and of the academic community.

A 18-member team of the Croatian Armed Forces conducted the assigned tasks in the Barracks “1. Gardijska brigada Tigrovi – Croatia“ in Zagreb, and two members of the Cyberspace Command joined NATO ‘s Cyber Range in Tartu, which directs the Cyber Coalition. Estonia was chosen to host the cyber defence centre as it was the first target of a cyber attack in 2007, and has since been a model of excellence in the development of cyber defence.

Exercise scenarios have been devised and tailored to the actual situations and threats that might occure in any of the participants’ armed forces operations area. The scenarios are released from the Cyber Range in Tartu to the national participants, who are tasked with detecting the attacks and establishing the facts. The participants need to detect attacks and provide feedback on the observed state and the impact of the malicious code on other participants. The exercise form is highly relevance for the participants, as it provides the participants with the skills necessary in the event of a real-life cyber attack.

The exercises of the kind are among the most effective tools used in the development of cyber defence. The objective of the Exercise is to strengthen co-ordination and co-operation between NATO and the member nations, to enhance cyberspace protection capabilities, and conduct cyber-military operations. Governments, state institutions, organisations and companies are increasingly using cyberspace, increasing the risk of hacking attacks. Hacking attacks are nowadays considered biggest threat to world peace and security.

At NATO Summit in Warsaw held in 2016 the cyberspace was recognised as the 5th dimension of warfare. The success of military operations on land, in the sea, in the air and in space depends to a large extent on the accessibility of cyberspace. Cyber threats have become the fastest growing security challenge , and cyber security has become a security priority for NATO and its members. NATO is faced with frequent and evolving threats, and an attack on any of its member nations may pose a collective risk for the Alliance, which is why cyber defence has been earmarked as a priority for the Alliance and its members.

The Republic of Croatia has taken part in Cyber Coalition since 2009, first as observer, and from 2013-2016 as participant, and since 2016 as national representative. The participants include the personnel of the Ministry of Defence and of the Croatian Armed Forces, as well as from the Ministry of the Interior, of the Ministry of Foreign and European Affairs, of the Office of the National Security Council, of the Security and Intelligence Agency, of the Information Systems Security Bureau, National CERT, CARNet,); representatives of the academic community (the Faculty of Electronic Engineering and Computing) and of the private sector (Span Ltd., Diverto Ltd., Microsoft Croatia, INsig2 Ltd., Utilis Ltd., ReversingLabs Ltd.).

At the Distinguished Visitors Day held in the Barracks “1. gardijska brigada Tigrovi – Croatia” in Zagreb the Exercise participants were welcomed by the Head of the CIS Directorate of the General Staff of the Croatian Armed Forces Colonel Ante Tolić on behalf of the Chief of the General Staff General Mirko Šundov.

The Head of the CIS Sector of the Ministry of Defence Colonel Bruno Bešker as Envoy of the Deputy Prime Minister and Defence Minister addressed the participants and distinguished visitors and delivered a presentation on the important role of cyber defence within the homeland security system. The Exercise site was also visited by the Croatian Armed Forces CSEL Sergeant Major Mario Mateljić, as well as by senior CIS officers and representatives of national institutions, academic community and of the private sector.
The Commander of the Cyberspace Command Colonel Daor Dabo presented the history of the participation of the Croatian Armed Forces and of the Cyber Space Command in Cyber Coalition, and and underlined its importance for the Ministry of Defence and for the Croatian Armed Forces and the importance of connecting of the key national cyber security actors. The Cyber Coalition Exercise serves to develop capabilities of response to a series of threats in cyber space, such as the recent occurences of IoT security attacks.

Following the presentation the visitors toured the cyber range and observed the operation by the members of the Cyber Space Command during the Exercise , headed by Major Dejan Petek.