Back to homepage »
Share:
The exercise, planned and directed by the United States European Command (USEUCOM), marks the 10th anniversary of Croatia's accession to NATO. Over 1600 members of allied and partner armed forces, 30 helicopters and 200 motor vehicles are taking part in it 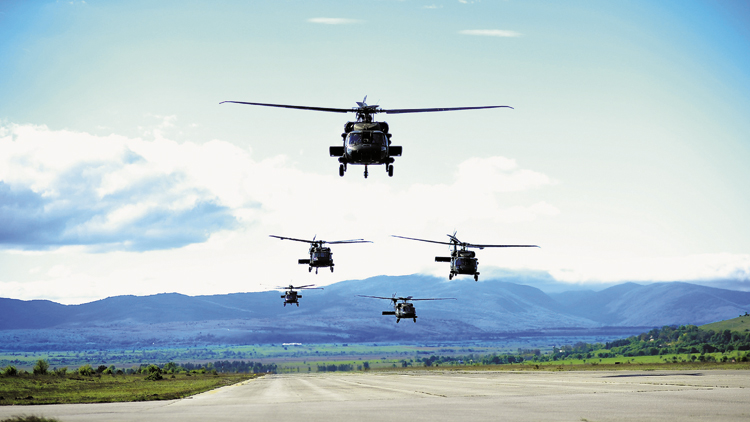 U.S. forces’ air assault on Eugen Kvaternik Training Area near Slunj from Josip Jović Training Area in Udbina was one of a number of activities that kicked off big international military exercise Immediate Response in mid-May. The exercise is conducted in Croatia Hungary and Slovenia, which serve as both host countries and co-organizers. Over 1600 members of allied and partner armed forces, 30 helicopters and 200 motor vehicles are taking part in it, with the ending being planned for 6th June.

The exercise, planned and directed by the United States European Command (USEUCOM), marks the 10th anniversary of Croatia’s accession to NATO, with the emphasis being laid on the training of the forces from the signatories of the Adriatic Charter. In the exercise, Croatia was put in charge of the Command of the Multinational Battalion, where the members of its armed forces took up the positions of troop commander and staff officers. The Multinational Battalion was made up of the members of armed forces from 14 countries: Albania, Bosnia and Herzegovina, Croatia, France, Germany, Hungary, Kosovo, Lithuania, Montenegro, North Macedonia, Poland, Slovenia, the United Kingdom and the USA.

The first location of the exercise was the training area in Udbina, where 17 helicopters belonging to the U.S. Air Force landed from Aviano Air Base, Italy on 16th May. In the next few days, these helicopters carried out an air assault on Eugen Kvaternik Training Area together with Italian special forces, who infiltrated the training area so as to gather information about the opponent’s strength and deployment.  In four and a half hours, over 400 soldiers from the U.S. Armed Forces’ 173rd Airborne Brigade as well as a large amount of equipment and assault vehicles landed in Slunj.

The assault was carried out in four air raids, with each raid consisting of two waves and each wave being made up of two Boeing Ch-47 Chinook and four UH-60 Black Hawk helicopters. Once the assault was over, the members of the 173rd Airborne Brigade seized key infrastructure behind the opponent’s back. The assault marked the formation of a 650-man multinational battalion. The exercise itself employed up to 1000 people.

For the first time in history, the Croatian Navy’s vessels transported forces from a port of embarkation in an allied country. During the exercise, 63 members of the Albanian Armed Forces, 45 members of the Kosovo Security Forces and 23 vehicles embarked the Croatian Navy’s landing ships / minelayers the Krka and the Cetina in Durrës, Albania and debarked in Port Gaženica in Zadar the same day. From there, they were transported to Eugen Kvaternik Training Area by road. Six motor vehicles carrying 22 members of the Armed Forces of Montenegro arrived at the training range via Karasovići Border Crossing, while 99 members of the Armed Forces of Bosnia and Herzegovina crossed Ličko Petrovo Selo Border Crossing with 17 Humvees and three trucks. Additionally, 30 members of the Army of the Republic of North Macedonia entered Croatia via Bajakovo Crossing Border on 12 motor vehicles, whereas 135 Slovenian soldiers on 36 motor vehicles crossed Macelj Border Crossing on their way to the training area in Slunj. After the arrival of all forces to their final destination, the second phase of the exercise could commence. In that phase, the Multinational Battalion carrying out attacks, driving in a convoy and crossing the state border.

The final phase of the exercise is being conducted from 1st to 6th June. The Multinational Battalion set off from the training area in Hungary, where they will train border crossing operations in a tactical formation and secure a logistics base in Kaposvár.

The Exercise Director of Immediate Response 19 was Lieutenant General Christopher Cavoli (USA), while Brigadier General Boriš Šerić of the Croatian Army was appointed Deputy Exercise Director for Croatia. Croatia allocated a mechanized company with Patria AMVs, a command company, a support company and a military police platoon to the exercise’s Multinational Battalion.

Additionally, around 15 members of the Croatian Armed Forces will be deployed to higher commands and Exercise Control (EXCON) groups on various locations outside Croatia.

The objectives of the exercise are the promotion of stability and co-operation, the strengthening of joint capabilities among partners and the development of trust through the advancement of interoperability among NATO partner and allied countries. The exercise is this year’s main training event in Croatia. From this year onwards, it will be conducted biannually. The essential objective is the training of multinational forces’ military mobility.

The Multinational Battalion demonstrated the ability to engage forces after a short period of integration training. The objective of the day’s exercise was to demonstrate synchronized engagement of manoeuver forces, co-ordinated field artillery and combat service support units under simulated conditions of an integrated battlefield in five phases: movement to contact and concentrated artillery fire support; attack; seizing objectives; the continuation of the attack; and reaching the limit of advance.

Minister Krstičević thanked soldiers for taking part in the exercise, pointing out that the presence of soldiers from allied and partner countries at the exercise enhanced the celebration of Croatia’s membership in NATO: “None of us can deal with the new security paradigm on their own. Therefore, it is important to build alliances and strengthen partnerships with other countries. Today’s exercise has been a demonstration of that alliance. We are stronger if we stand together!”

General Šundov underlined that the exercise would increase allied and partner countries’ readiness and interoperability as well as demonstrate the Multinational Battalion’s capability of relocating across state borders within NATO, thus raising the mobility level to a higher degree.

General Šerić recalled all activities conducted during the exercise and announced the Multinational Battalion’s upcoming activities.