Back to homepage »
Share:
“The Homeland Security System is a brand of the current government,” said Deputy Prime Minister and the Minister of Defence Damir Krstičević, reminding once again how the mission of the Croatian Armed Forces and all other components of the Homeland Security System was to provide timely and efficient assistance to civilians 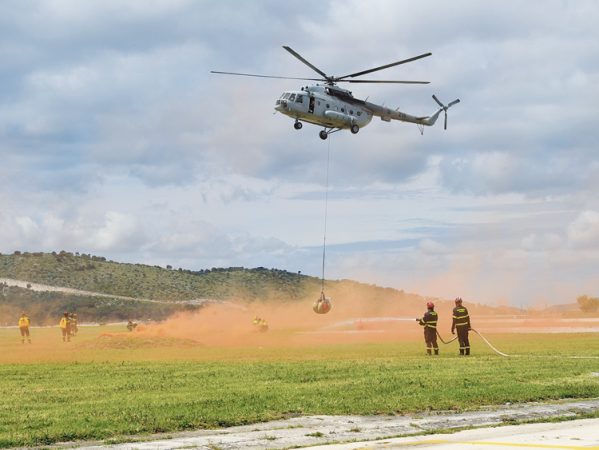 Inter-departmental exercise Security 19, conducted in the village of Divulje near Split on 21st May, was a great demonstration of firefighting, military and police forces’ strength, readiness, co-ordination and techniques in the execution of their tasks for the upcoming summer wildfire season.

The new Orbiter 3 unmanned aerial vehicle was presented at the Firefighting Operations Command in Divulje. The Orbiter 3 can be used for numerous civilian and military purposes within the Homeland Security System. The function of catching sight of details from a large distance can help in early fire detection and in the surveillance of waterways and motorways. The vehicle, which will be operated by the Croatian Armed Forces, can efficiently provide support in crisis situations and in the surveillance of state borders. 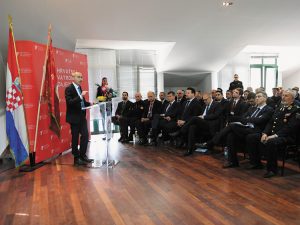 Prime Minister Plenković expressed his satisfaction with the conducted exercise and extended his appreciation to all its participants for their efforts in fighting fires.

“This impressive exercise has demonstrated the efficiency of the Homeland Security System in crisis situations and the synergy of the parties involved in it,” Plenković said, highlighting that the status of the Croatian Firefighting Association would be elevated to the status of a central state administrative office during the current government’s term.

Minister Božinović underscored that the Homeland Security System was growing to be more coherent and efficient, with special emphasis being laid on prevention.

Chief Firefighter Commander Tucaković presented exercise Security 19 and expressed his gratification at the overall system, especially at the integration of all images and on-field camera on five locations. “The co-ordination of all components of the Homeland Security System was on an extremely high level,” Slavko Tucaković said.

The main authorities in exercise Security 19 were the Croatian Firefighting Association and Chief Firefighter Commander Tucaković, while the Croatian Armed Forces participated with their air, naval and land resources, including two Canadair aircraft, two Air Tractor aircraft, two Mil Mi-8 transport helicopters as well as the Croatian Navy’s landing ship / minelayer, landing-assault ship and rubber boats. Participants included two fire fighting platoons, the Special Forces Command’s search-and-rescue team and the Intelligence Centre with the Orbiter 3 unmanned aerial vehicle. The exercise was conducted on remote locations in Zadar County, Šibenik-Knin County and Split-Dalmatia County in real time. From a screen in Divulje, guests could follow an intervention of co-ordinated forces in a simulated wildfire in the town of Gračac, on the island of Brač and in National Park Krka as well the rescue of casualties involved in a car accident at the entrance to Sveti Ilija Tunnel. The exercise also featured presentations of the Orbiter 3 unmanned aerial vehicle, the new methods of transporting firefighting forces with the Croatian Navy’s vessels and the engagement of air forces in extinguishing fires and rescuing firefighters in jeopardy. The equipment which is to be used by firefighters and others in the upcoming wildfire season was also on display. Thus, exercise Security 19 was an opportunity to verify the jurisdiction of the Homeland Security System stemming from laws through which the bodies within it were founded, test the co-ordination and communication in the firefighting system and among the bodies belonging to the Homeland Security System as well as authenticate the communication and information systems used in the Firefighting Operations Command. The exercise was conducted pursuant to Item 33.b of the Activity Programme for the Implementation of Special Measures for Fire Protection in the Republic of Croatia for 2019.

The complex inter-departmental exercise Security 19 manifested the skills, co-ordination and efficiency of all parts of the Homeland Security System as well as the potential of new capacities which are to be used in the upcoming wildfire season. The Croatian Firefighting Association played the biggest part in the organization of the exercise.

The past few weeks have been marked by an increase in firefighting interventions due to bad weather, floods and fires, all of which seem to foreshadow a demanding wildfire season this year.