Back to homepage »
Share:
Defence Minister Ante Kotromanović took part in the “To be Secure“ global security forum, held in Budva, MNE from 4-6 June.  The fifth annual forum, organised by the Montenegro Atlantic Council and supported by the Government of Montenegro, NATO, the U.S. Embassy to Montenegro, the […] 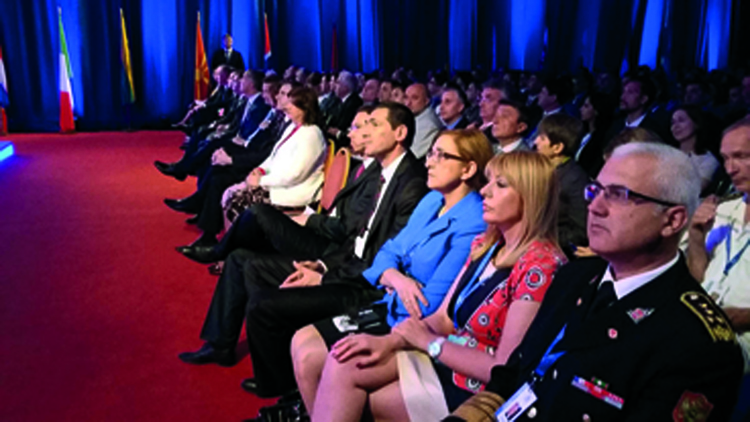 Defence Minister Ante Kotromanović took part in the “To be Secure“ global security forum, held in Budva, MNE from 4-6 June.  The fifth annual forum, organised by the Montenegro Atlantic Council and supported by the Government of Montenegro, NATO, the U.S. Embassy to Montenegro, the Balkan Trust for Democracy and the host town, focussed on on the global, the transatlantic and the security in Southeast Europe.The fifth “To be Secure“ forum tackled the main challenges of international security and topics relevant for Allies ad partners, including the situation in Ukraine, Iraq and Syria. The Forum included several panels, discussing the NATO’s positioning at the global level, the growing threat to the region, the reshaping of the security architecture system to counter the existing terrorist threats, the impact of changing international order on the European security and the Balkans security and the NATO membership perspective.  Minister Kotromanović took part in the panel “Foreign fighters  –  a growing threat to the region“, which addressed  one of the most specific security threats for Southeast Europe and a growing concern for the Euro-atlantic stability, and called on for unified response of all countries and all segments of the civil governments and the military institutions. In his address the Minister underlined the anti-ISIL Coalition bearing an important enticement and the imperative to undertake energetic steps; he stressed that pursuant to the UN Security Council Resolution of September 2014 the countries in the region have amended their respective legislations towards prosecution of their citizens travelling and joining the terrorist activity, concretised in actual arrestings.
Countering the challenge viable only on condition a comprehensive strategic approach is adopted, combining the repressive with a number of other measures – “border control, intensive intelligence operation and the exchange of information on movements, surveilling the individuals suspected to belong to terrorist networks and the social networks serving as an important platform for recruiting of foreign terrorist fighters and tracking the flow of money supporting their activities“, said the Minister.
The ISIL displays astonishingly skillfull use of modern technologies to indoctrinate and propagate simultaneously in several languages, much unlike the former terrorist networks. In such a context international co-operation is a necessary precondition of successful against the foreign ISIL combatants. Minister Kotromanović asserted that the Republic of Croatia was supportive and determined to play an active role in any form of co-operation of security systems in the countries faced by threats from the ISIL volunteers and other extremist ideology menaces to the security of Croatia’s and the region alike. The Minister also said that Croatia would continuously advocate the awareness both at the regional and broader  international context.
The 2015 To be Secure Forum was focussed on Montenegro, following the Wales summit decisions and expectations for Montenegro’s membership in NATO resolved in the near future. Minister Kotromanović said he expected Montenegro to receive invitation for NATO membership by the end of the current year,  bringing higher stability to Southeast Europe. Minister Kotromanović’s participation in the Forum is a proof of the highly productive and successful bilateral defence co-operation and the support provided by the Republic of Croatia to Montenegro’s efforts towards membership in the Alliance.