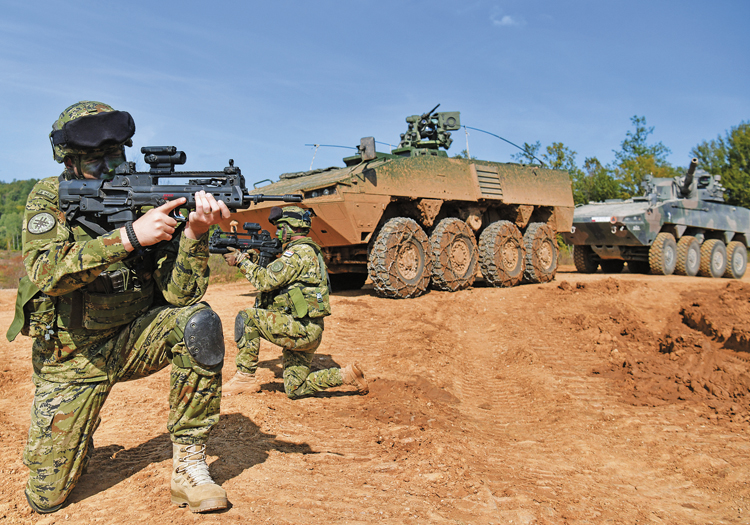 When CROMIL’s team visited Eugen Kvaternik Training Area in the central Croatian town of Slunj on 1st October, more than 600 members of the Croatian Armed Forces, supported by their Polish colleagues and augmented with numerous combat vehicles, were rushing with final preparations ahead of the live-fire exercise Strike 19.

The dress rehearsal was moments away and the Commander of the Guards Mechanized Brigade Brig. Gen. Tihomir Kundid, acting as the Officer Conducting the Exercise (OCE), was overseeing it so as to make sure that the Distinguished Visitors’ Day passed off exactly as planned. The Guards Mechanized Brigade generates forces for the 2nd Croatian Contingent in enhanced Forward Presence in Lithuania and provides training for the members of the 3rd Mechanized Battalion Pauci (Spiders) who will soon join a Germany-led multinational battlegroup in the area of operations. Furthermore, the Motorized Company, 1st Motorized Battalion Vukovi (Wolves) contributes to EU Battlegroups (EUBG) and the unit’s combat readiness for its future tasks was evaluated at the exercise.

“Strike 19 is the Guards Mechanized Brigade’s main training event for this year. It has got two objectives. The first objective is the demonstration of the brigade’s combat readiness through an offensive action conducted jointly with a unit of the Polish Armed Forces. The second objective is the certification of declared units: the Motorized Company, 1st Motorized Battalion Vukovi (Wolves) and the Mechanized Company, 3rd Mechanized Battalion Pauci (Spiders), the latter of which is to be deployed to NATO’s enhanced Forward Presence in Lithuania. The two nations’ co-ordinated integration and their control of fire and manoeuvre will be demonstrated in simulated conditions of an integrated battlefield,” explained Brig. Gen. Kundid. The exercise will also feature a showcase of firepower elements that a combat-ready unit ought to possess. In the field, manoeuvring forces will receive fire support from a battery of PzH 2000s, a battery of 122mm D30 howitzers, 120mm mortars, 82mm mortars and a platoon of 120mm multiple rocket launchers as well as a platoon of 120mm self-propelled mortars belonging to the Polish Armed Forces.

Furthermore, soldiers will demonstrate their capability to dispose of explosive ordnance as well as decontaminate human bodies and combat vehicles. Exercises bearing the name Strike have been held annually for the last seven years, but this is the first that time that the exercise is being conducted in co-operation with another nation.

“Previously, only Croats had taken part in the exercise. We wish to collaborate closely with the Polish Armed Forces because their mechanized brigades are equipped with the same type of combat vehicle as ours. Likewise, the two countries’ armed forces are linked through NATO’s enhanced Forward Presence in Poland, where a Croatian military battery is a part of a USA-led battlegroup. Moreover, as a NATO country, we benefit from developing our forces’ interoperability in a multinational environment,” said Brig. Gen. Kundid, adding that Polish soldiers were well trained and equipped.

“They came prepared for the exercise, so that their integration into our system was smooth. All of our joint practices were conducted in the last ten days,” concluded the OCE.

A platoon comprising 42 members of the 1st Mechanized Battalion, 17th Mechanized Brigade has arrived from Poland and will provide gunfire support in the exercise. The Poles have been involved in the planning process from the very beginning, drafting planning documents and training manuals at the Initial, Main and Final Planning Conferences.

In the exercise Strike 19, the task force in the manoeuvring space is commanded by the Commander of the 3rd Mechanized Battalion Pauci (Spiders) Maj. Ivica Armanda, who explained the course of the exercise to CROMIL’s team.

“We shall demonstrate a four-phase attack on assigned positions. The manoeuvre itself will be conducted on one principal route and two secondary routes. A shaping operation will be conducted on one of the secondary routes so as to create preconditions for committing forces on the principal route. In the second phase, anti-tank weapons will ram the enemy front line and conditions for committing the main body will be created on secondary routes. The main body’s task is to seize enemy positions and transform the on-going action into a stability action,” said Maj. Armanda. A total of 179 members of declared forces set to join NATO and EU battlegroups are under evaluation. Maj. Armanda described the long journey from planning to conducting the live-fire exercise.

“Before the exercise, we took all the necessary steps to ensure that our soldiers are trained, capable of passing the certification exercise and ready for carrying out tasks in mission. We started generating forces a year ago. In the first training phase, basic military and specialized skills were mastered. We started with squad-level training and combat firing practices. Training, combat firing practices and evaluation on a platoon level were followed by company-level evaluation and another combat firing as the crown of the training. These forces have also taken part in the exercise Immediate Response 19 and have demonstrated their capability of integrating with partner states’ armed forces in it,” said Maj. Armanda.

According to the task force’s commander, the participation of the Polish Armed Forces in the exercise Strike 19 was just what Croatian soldiers needed to enhance their speed and penetrability. The leader of the participating Polish platoon, 1st Lt. Piotr Jaworski confirmed that the Polish soldiers had successfully acclimatized themselves to the training area in Slunj and integrated themselves with Croatian forces. 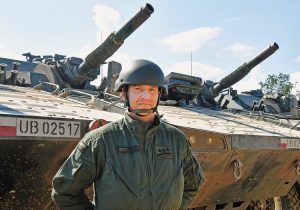 “A total of 42 soldiers and 13 vehicles arrived at Slunj from Poland on 22nd September. Croatian soldiers helped us get settled and ready for the exercise. After a security briefing, we familiarized ourselves with technical capabilities of Patria and Oshkosh M-ATV vehicles as well as personal weapons that we are using right now,” said 1st Lt. Jaworski of his stay in Slunj.

The training area in Slunj also played host to a point-shooting competition, which was won by a member of the Croatian Armed Forces.

“A Polish soldier came in third place. Croatian soldiers do have the home-court advantage, after all,” laughed 1st Lt. Jaworski, adding that his platoon was staying at Eugen Kvaternik Training Area for the first time and emphasizing that he was glad to take part in the exercise Strike 19.

“Today’s dress rehearsal included combat firing and I am extremely pleased with the Polish soldiers’ showing. We were synchronized and we accumulated new skills and experiences,” concluded 1st Lt. Jaworski.