Back to homepage »
Share:
Unlike previous editions of this exercise, Harpun 19 was marked by the introduction of new materiel and equipment: the Strela 2M man-portable surface-to-air missile launcher was engaged in firing at an aerial target, while surface targets at sea were fired at from the Croatian Air Forces’ OH-58D Kiowa Warrior helicopters. The Croatian Navy’s newly-procured OOB-31 Omiš coastal patrol vessel also deployed in the exercise 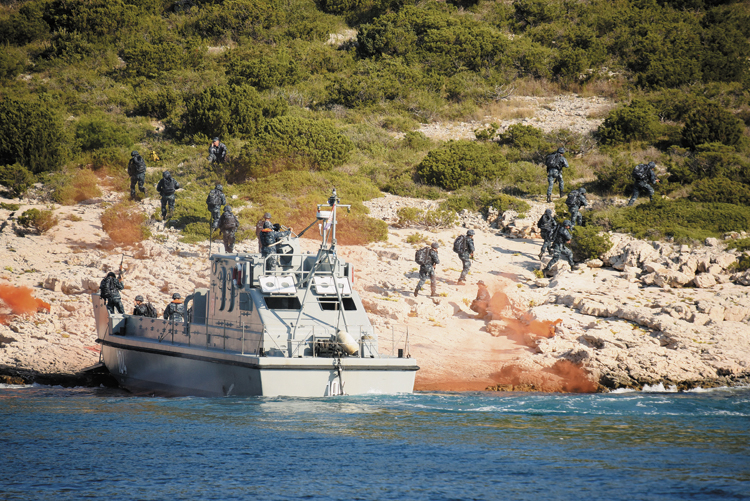 The opposing force has seized the island of Žirje and is preparing to commit more manpower so as to strengthen the island’s defence. Naval infantrymen are given the order to carry out an amphibious operation. The offensive action is continued with artillery preparation, air raids and infiltration of forces until the island is liberated at last…

Croatia is not engaged in naval warfare, luckily; outlined in the paragraph above is one of the scenarios of military exercise Harpun 19, which was conducted in the local waters of the central Adriatic from 21st to 25th October. CROMIL’s team spent a day on the DBM-81 Cetina landing ship / minelayer and witnessed the Croatian soldiers’ training for the exercise first-hand.

“This is the Croatian Navy’s most important training event this year,” emphasized Capt. Vlade Zoko, commander of landing and transport forces at the exercise Harpun 19.

So as to enhance the Croatian Armed Forces’ capability of joint engagement, this year’s edition of the exercise implemented lessons learnt and elements recommended at last year’s exercise Velebit 18 – Joint Force.

The exercise began on 21st October at Zečevo Barracks near the coastal city of Šibenik, where the main command post and directing staff were installed.

On the day of CROMIL’s visit, the exercise’s participants were practising for the aforementioned amphibious operation, which was explained to us by Lt. Kristoforo Bedrina, shipmaster of the DBM-81 Cetina: “Today, you observed a crew who are trained to carry out all tasks at sea. One of those tasks involves transporting and transferring naval platoons and naval infantry from a large landing ship to a small landing boat.” Lieutenant Bedrina added that in the days prior, the crew had gone through training in the domains of amphibious assault, air support, artillery support, special operations, electronic warfare, etc.

A novelty at this year’s edition of the exercise was firing at an air target with the Strela 2M man-portable surface-to-air missile launcher, which was conducted off the DBM-82 Krka landing ship / minelayer with support from the Croatian Army’s Air Defence Regiment. PO3 Ivan Đuka, transporter of man-portable missile launchers at the exercise, said that renewed capability of the Croatian Navy supported the development and strengthening of air defence activities. “Due to the limited amount of space on the vessel and the possibility of rolling, we have to take caution,” explained Petty Officer Third Class Đuka.

Unlike previous editions of this exercise, Harpun 19 was marked by the introduction of new materiel and equipment. Nevertheless, it is the dedication of individuals and their commanders across all levels that contributes the most to the successful execution of the exercise year after year. Deputy Commander of the Naval Infantry Company Capt. Ante Šarić emphasized: “By combining experience from Croatia’s Homeland War of Independence [1991 – 95] and the youth of our personnel, we have reached the climax of our training. I can say I am quite pleased with my company’s motivation and with the execution of all tasks.” 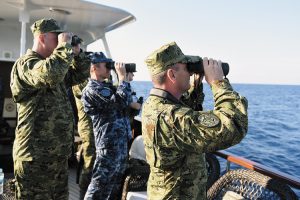 “The aim of the exercise – to demonstrate our training and competence in the preparation and execution of combat activities through co-ordination of the Croatian Armed Forces’ branches and arms – has been fully achieved,” said Rear Admiral Raffanelli, calling the eleventh edition of the exercise Harpun a success.

For the first time, members of the armed forces of France, Italy, Poland and the USA took part in the exercise as observers. General Šundov took notice of their presence, saying that linking up with partner and neighbour states was an added value of the exercise Harpun 19. He also expressed his firm belief that the exercise would acquire international character in the near future, with the Croatia being represented by a national component. Exercise Director Cdre Damir Dojkić was also pleased with what he had witnessed: “Alongside our already verified capabilities to conduct amphibious operations as well as engage in mine warfare and warfare above water, I am pleased to conclude that this exercise has also testified to a significant improvement in our air defence capabilities as well as our capability to provide fire support to naval forces from air.”