Back to homepage »
Share:
The two crises - the COVID-19 pandemic and the earthquake in the wider Zagreb area – affirmed the importance of joint and coordinated action of all relevant national actors The two crises – the COVID-19 pandemic and the earthquake in the wider Zagreb area – affirmed the importance of joint and coordinated action of all relevant national actors (citizens in particular) to implement efficiently both the preventative or relief measures. Since the establishment of the Homeland Security System the subject emerged of a functioning partnership in which citizens played a special role, but also the synergy of all components of the system

Since independence the Republic of Croatia has not been faced with a crisis at a national level that called for coordination of nearly all government administration bodies throughout the country. The Homeland War and natural disasters such as the floods have provided vast experience and lessons learned, and also created the awareness of the need for a systematic crisis response model in Croatia.

At the beginning of the present Government’s office a model for efficient and facilitated action was devised, the legislative framework set through the enactment of the Homeland Security System Act and – whose legal foundations were achieved through the adoption of the Homeland Security Act, and ideally by the adoption of a fundamental strategic document – the 2017 National Security Strategy.

Specifically, past experiences in responding to emergencies have indicated the need to establish a model that will systematically address existing deficiencies through coordinated emergency planning, response and management.

The Croatian model of coordinated respoonse to the crisis passed the extraordinary test in the first phase.

Each component assumed responsibility for its own domain. The National Civil Defence Headquarters assumed the critical mission of curbing the spread of COVID-19, and had the capabilities and resources of the Croatian Armed Forces made available.

Within less than 72 hours the Croatian Armed Forces pitched an expeditionary camp in front of the Dubrava Clinical Hospital to accomodate the COVID-19 infected patients, and other logistic capacities were placed at disposal of hospitals throughout Croatia.
Health protection

The homeland security system proposed a new thinking and operating strategy – acting swifter, better and preventingreadier than the threats. One of the results of the action is the building of trust in the competent services, which was, among other things, achieved through open and daily communication of the National Headquarters with the citizens through the media. 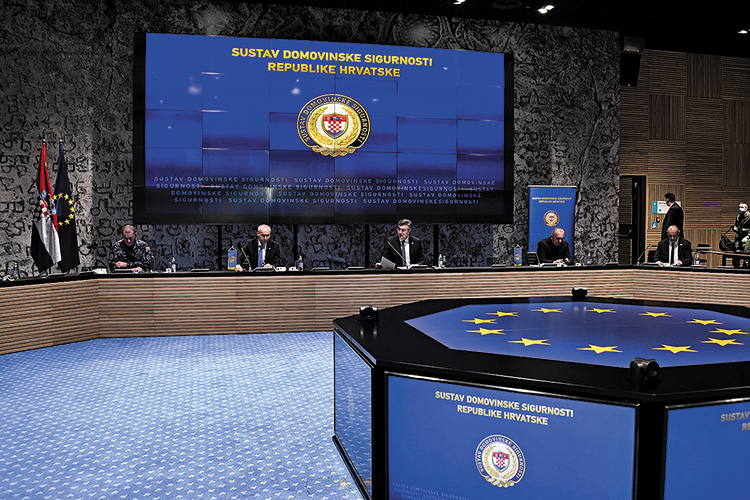 The main measures in the initial phase of the pandemic focussed on the protection of human health through preventive measures against the import of infection from abroad and to retard the spread of the infection within the country and to prepare the national health system for the reception of patients.

The end results achieved in Croatia were better than in other countries, as indicated in the statistics of the infected and hospitalised compared to the patients with grave symptoms and deceased and the availability of the health resources.

Unfortunately, as the system and citizens were making efforts to adapt to the life in extraordinary conditions, the early morning of 22 March brought a new challenge – a severe earthquake shaking Zagreb and the surrounding area, causing severe damage, taking a life of a young girl Anamarija Carević and destroying many homes, not to mention the fear of the citizens.

Crisis management is a challenge in itself, but when two threats occur concurrently, the additional crisis complicates the primary crisis and the management and response processes.

In spite of all the security system in Croatia responded swiftly to the crisis. The repair the reconstruction remains to be done, the responsible services ded by coordinated operation of the action has promptly taken the responsible services to the field and put in place the necessary mechanisms, so the assessment of the system’s efficiency at the time of the crisis was very good. This leading role has been taken by components of systems that are not as active in the pandemic of the coronavirus: the Croatian Fire Union, the Croatian Armed Forces, the City Office for Emergency Management and other services of the City of Zagreb.

The main streets were cleared within a very short time and the dangerous ruble removed, through the efforts of the Croatian Armed Forces. y participated in the cleanup of the city, as well as in other necessary activities. On 17 April its members took part in a successful removal of the north spire the Zagreb Cathedral, which was on the verge of collapsing.

The Croatian Armed Forces engaged reconnaissance capabilities and used UAVs to surveil and analyse the damage and provide the construction services with the critical information for the repair phase.
Partnership for security

Both cases indicated the importance of coordinated joint operation by all relevant stakeholders, particularly by citizens,for efficient implementation of both preventive and relief measures.

The homeland security concept became the talk in the recent years, as the previous system was ill-coordinated and fragmented and necessitated improvements.

The new National Security Strategy of the Republic of Croatia outlined the national interests and nine strategic goals, one of whom pertains to the establishment and development of the homeland security system.

The pandemic and earthquake response measures taken in Croatia approved the establishment of homeland security system, particularly in situations placing emphasis on protection of health.

The Committee for Homeland Security at its recent meeting concluded that the System was operating well and ensured effective crisis response and capability pooling.

All components engaged in combating COVID 19 and during the repair of the effects of the earthquake were asked to deliver the respective lessons learned by 1 June, given that building and development of the homeland security system was a continuous process and a mission of the responsible bodies. As with other systems, it takes time to attain a high level of optimal functioning and the progress depends on all components of the overall security system of the Republic of Croatia. The lessons learned need to be systematised , either through a legislative framework or through strategic decision-making.

Concerning the legal framework, the next step was the enactment of a crisis management legislation. Furthermore, a Crisis and Emergency Response Manual, to outline the concrete roles and tasks for the system components, with the focus placed on the phases in preparation and response for various types of crises.

The inception of the Homeland Security Studies at the Defence and Security University “Franjo Tuđman“, preparing future leaders for the demanding functional area will be a worthy contribution to the system and an important step, as Croatia at present has no classification framework for the experts in the domain.

The main government administration bodies (the interior, defence, foreign affairs, civil defence, environmental protection, health, finance and justice) including the subordinate units and security and intelligence services of the Republic of Croatia.

Other bodies within the Homeland Security System

The Homeland Security System can engage legal persons of critical importance for defence and protection (Croatian Firefighting Association, Croatian Red Cross, the Croatian Mountain Rescue Service), the associations from the Homeland War, associations of citizens and other legal persons capable of providing support to the system with the management of security risks and in crisis situations affecting national security.

The Homeland Security System may also engage the local and regional governments.

The decision to engage legal persons from the Para 1 of the Article 1 is a responsibility of the Government of the Republic of Croatia .

National Security Council – the main body of the Homeland Security System, approving the working plans and plans of development of the homeland security system.

The Homeland Security Committee is an interdepartmental body responsible for coordination of operation of the homeland security system. It launches initiatives and develops the respective plans. The first session of the Committee in 2020 was held on 8 April 2020, chaired by the Prime Minister Andrej Plenković, and was dedicated to the operation of the system in the pandemic situation and the recent earthquake and issued further guidelines and assignments to the engaged services and bodies within the System.