Back to homepage »
Share:
The forces of the Croatian Navy's Flotilla on 27 February conducted live firing with naval guns and a series of traiing activities (the support to the Special Forces Command) 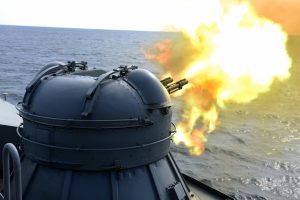 The forces of the Croatian Navy’s Flotilla on 27 February conducted live firing with naval guns and a series of training activities (the support to the Special Forces Command, whose members engaged sea targets with  infantry weapons from combat rubber raiding craft in movement. On 27 February 2018 the Croatian Navy Flotilla conducted live firing with naval guns In the naval training range (the island of Žirje) included the support to the Special Forces Command, during the firing with infantry weapons at sea. The exercise activities were conducted using the DBM-81 landing craft – minelayer, the missile boat RTOP-42, the DJB-104  and DJB-106 landing craft – assault and the 20-mm, 23- mm, 30-mm and 57- mm naval guns. Alongside the vessels of the Croatian Navy Flotilla and of the Croatian Coast Guard, the landing rubber crafts  of the Special Forces Command provided security of the training range. The hostile weather conditions (low temperatures and strong wind) were an extra challenge to the vessel crews, particularly the artillery, but all the planned activities (artilllery firing, replenishment-at-sea and tactical manoeuvering) were successfully completed. THe Navy forces demonstrated trainedness, the skills and readiness for various joint activities with other components of the Croatian Armed Forces.

The Commander of the Exercise, conducted by the 2nd Group of the Special Forces Command stressed that the event fulfilled all expectations“. The conditions were all not favourable – the sea state was 2-3 and the wind speed exceded 20 knots, at times even 25 knots. At the moment I decided to transfer the soldiers onto the rubber crafts, the wind got stronger and the waves grew taller. Despite all they fired accurately and performed very well“. The Group’s members were not disturbed by the bad weather conditions. In the words of the Commander of a segment of the Special Forces exercise: “their goal and their task anyway is to operate in any weather conditions and on any platform . 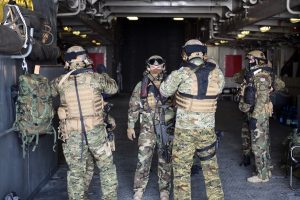 This is the first group engaging of sea targets from a group of amphibious combat boats in movement.  Each landing rubber craft has a crew of three: a coxswain, a navigator and a gunner, who is in charge of target tracking and responding to contact. With  certain tasks, such as taking over the craft, the gunner is on the first line and has to respond; one of the objectives of the Exercise was to test the weapons and the gunners’ readiness, practice and shooting performance in adverse conditions as we saw today.”The M 84 and M 80 PKM semi-automatic rifles were mounted onto the landing craft; it also allows NATO-calibre machine guns and grenade thrower. Depending on the needs, situations and tasks the Special Forces teams aboard the landing craft can provide fire support to other vessels, to groups operating on land and with infiltration or exfiltration of special forces from the littorals.