Back to homepage »
Share:
The Exercise “Kuna 18“, conducted in the Training Range “Eugen Kvaternik“ on 12 June 2018 demonstrated the integrated and synchronised operation of the OH-58 D Kiowa Warrior armed reconnaissance helixopters and of 2000 Panzer Howitzers 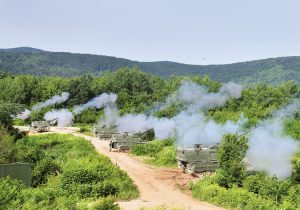 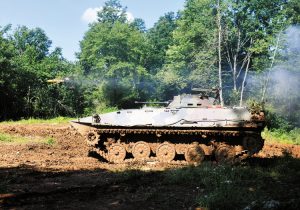 The Commander of the Guards Armoured Mechanised Brigade, Brigadier General Denis Tretinjak, the executive officer for the conduct of the“Kuna 18“  acounted the Exercise scenario: “The scenario featured an aggression on the Republic of Croatia, and the home forces executed movement to the contact.  Assuming that the aggressor was weaker the home forces launched an attack to neutrallise him, with combat support to gain  control over the area of operations and to secure the road  Slunj – Korenica. The Kiowa Warrior helicopters provided support to the land forces.   The Exercise “Kuna 18“, which was observed by the Chief of the General Staff of the Croatian Armed Forces, General Mirko Šundov, also served as a preparation for the Exercise “Velebit 18“, to take place in October 2018. “Our objective was to demonstrate new capabilities of the Croatian Armed Forces, primarily the integration of the capabilities of the Kiowa Warrior helicopters, the 2000 Panzer Howitzers and  functions such as  intelligence in the battlefield. The members have really mastered the operation of the new helicopters and Howitzers quickly; assisted by other support elements in this inter-branch exercise. The tank gunners hit precisely, the artillery – the Howitzers – had an important role, as did the engineers and other combat support elements“, said General Šundov, congratulating all participants and commanders on the efficient planning and conduct of the Exercise. The Chief of the General Staff also reminded that the Croatian Armed Forces successfully carried out all assigned activities, ranging from the assistance to the civilian population the engagement in international missions and operations, contributing to the stability and peace  in the world to defence of sovereignty and territorial integrity of the Republic of Croatia as its main mission. 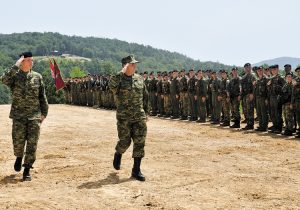