Back to homepage »
Share:
CROMIL’s team visited the pilot training conducted in the newly-opened Marko Babić Leadership Development Centre at Josip Jović Barracks in the hill town of Udbina. The centre’s objective is to develop and enhance the capabilities of the Croatian Armed Forces’ officers and NCOs 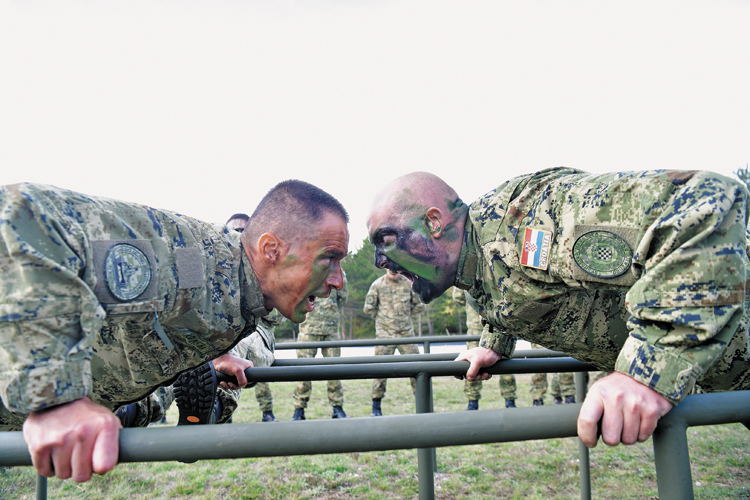 “Training here is not for the faint-hearted. We expect motivated trainees and I am pleased with the instructors’ work and the course of the training so far,” said Lt. Col. Tomislav Kausmović, Commander of the newly-opened Marko Babić Leadership Development Centre, while walking the grounds of Eugen Kvaternik Training Area in the hill town of Udbina. 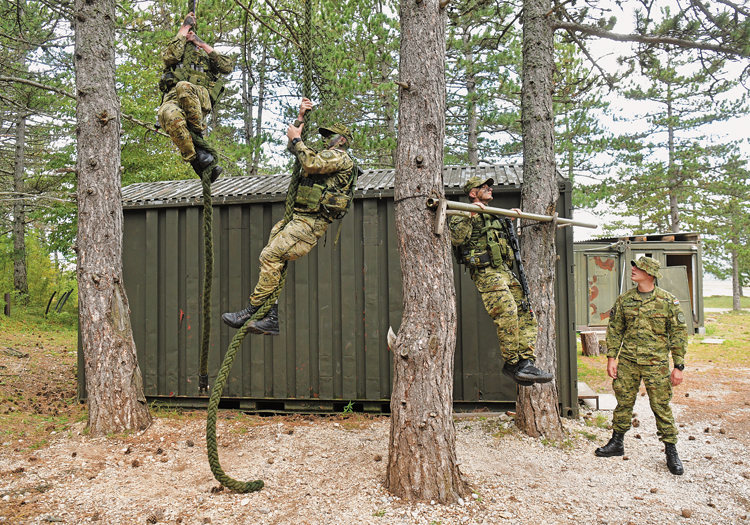 “That goes to show that the training is not easy. Those 16 trainees dropped out because the methods employed at the Marko Babić Leadership Development Centre are unlike anything they are used to. At the opening of the centre, it was made clear that the training approach would be an unconventional one. The weather does not impede the training and the pace of the training leaves no room for rest. Our objective is to bring the trainees in a state of fatigue and exhaustion so that the leader within them would come to the fore. A leader has to think sensibly and is not allowed to crack under pressure,” explained Lt. Col. Kasumović and continued: “Mental and physical resistance as well as readiness for task execution in all weather and tactical conditions must be on a very high level. Therefore, we create such an environment in which trainees are exposed to stress and we follow their task execution in controlled conditions.” 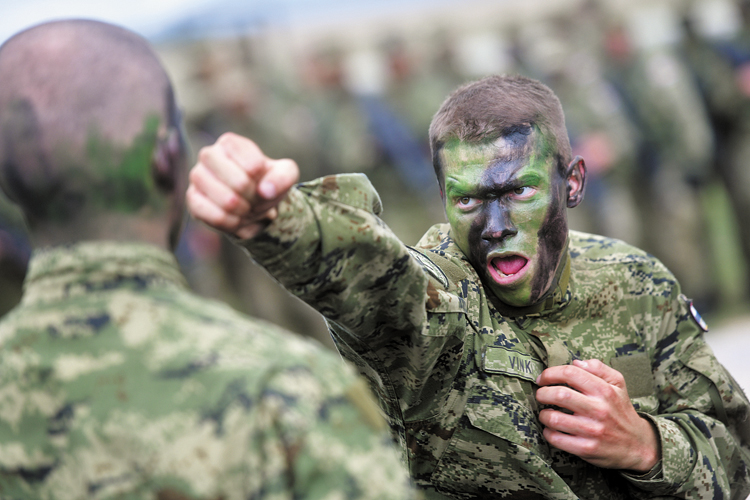 While we were talking, the trainees lined up under a mural of Marko Babić, a hero of Croatia’s Homeland War of Independence (1991 – 95) that the centre was named after, the national flag was raised and the cry Sweat spares blood echoed throughout the training area. The same routine once marked the beginning of a working day at the Damir Tomljanović Gavran Guards Brigades’ Specialist NCO Training Centre at Prvić Šepurine on the island of Prvić. The training there had been a major factor in creating an advantage for the Croatian forces ahead of operations Flash and Storm at the conclusion of the Homeland War and it had served as an inspiration and a guiding principle in the establishment of the Marko Babić Leadership Development Centre, where the focus is directed on the development of a leader, the pillar of every military unit. However, there are some differences between the former and the current centre. Those differences were explained to CROMIL’s team by 1SG Tomislav Jerabek, senior instructor in charge of the tactical portion of the training at the newly-constituted centre. 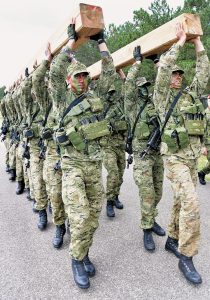 Tomislav Jerabek is just one of many instructors working with the trainees. The instructors are the first and last thing that the trainees see during the day, according to Lt. Col. Kasumović.

Although the instructors are the main authority in the training, Lt. Col. Kasumović also joins the training whenever time and obligations permit it. For example, he has held a lecture about leadership procedures to the trainees and joined them in morning calisthenics during CROMIL’s visit. After doing pull-ups and passing an obstacle course, the trainees were joined by the centre’s commander in doing push-ups while singing the national anthem.

At that point in the training, the trainees had already covered all programme areas related to individual tasks. In the next phase, those tasks would be linked and the trainees would be placed in the role of a commander/leader who had to plan out an assignment, defend it tactically in front of instructors, carry it out and analyse it. The training itself is a combination of combat skills, leadership elements as well as mental and physical endurance.

“The synergy of those three elements produces a competent leader capable of planning out and executing a high-risk task in unfavourable weather, under stress and with reduced resources. In such circumstances, a leader has to make the right decisions and carry out the task, but the most important thing is to bring people back alive from the task,” explained Lt. Col. Kasumović, noting that training at the centre was open to all members of the Croatian Armed Forces, especially unit commanders.

“We want to give soldiers something that they may not have in their parent units – a focus on training. The units of the Croatian Armed Forces work at a fast operational pace, conducting many tasks and exercises, so they may not have the time for training. This space is ideal because it offers six weeks of nothing but training in isolation. The Croatian Armed Forces profit greatly by investing in the best soldiers – NCOs and junior officers who will go back to their parent units better and more prepared and who will pass the knowledge acquired in the training onto others,” says the centre’s commander.

SSgt. Antonio Cesarec, senior instructor specialized in air, land and sea movement, pointed out that it had become clear how badly the Croatian Armed Forces needed such a centre and such training only after the training had already begun. 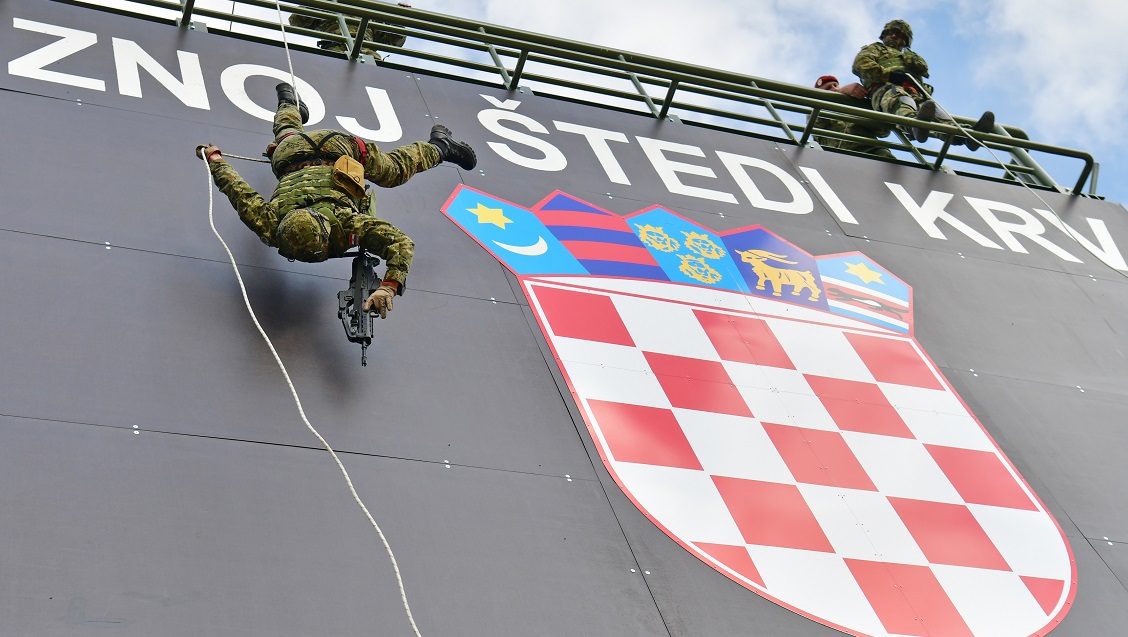 “The trainees are putting in a lot of effort. They are motivated. As the end of the training approaches, they are more determined to finish it. They have realized how significant the centre is for their work and careers. The current phase is focused on the novelty they came here for: they are being trained to lead,” says SSgt. Cesarec. Another instructor, Sgt Slaven Zlomislić, also confirmed that the trainee’s motivation grew as the end of the training neared. Sgt Zlomislić transferred to the Leadership Development Centre from the Centre for Basic Training, where he acquired experience in mentoring while working with recruits.

“At the start of the training, older trainees manifested greater motivation and eagerness. However, as time went by, younger trainees’ spirits grew, so it would not hurt if the training were a bit longer. The trainees will pass on the knowledge acquired here onto their parent units and they will be a valuable asset to their units in their further development,” said Sgt Zlomislić.

While CROMIL’s team was interviewing trainees about their impressions of the pilot training, a song broke out. Two groups of 22 trainees were carrying heavy-looking beams on their shoulders.

“Our training is very toilsome, / It is painful and very gruesome,” sang the trainees. We spoke with them amid their daily assignments and they all agreed on one thing – the training was exceptionally demanding, not because of arduous physical activities, but because of the tight-packed schedule. They got up at 5 a.m. and did not go to bed before midnight.

“Coping with the tight-packed schedule is our greatest difficulty. We cannot catch a break and there is never an idle moment. We had no idea the training would be this arduous and demanding. The fact that 16 people have dropped out, either because they got injured or because they missed their families, speaks volumes about the intensity of the training,” said Cpl Zvonimir Primorac, a member of the Air Defence Battalion. Still, all trainees took up the training as a professional challenge.

Mate Knezović, member of the Military Intelligence Company, Guards Mechanized Brigade, agreed, stressing that he had entered the training to accomplish an objective.

“We have learnt a lot. The main thing is to have a goal and a wish to succeed. The training means a lot to me because I have acquired new knowledge that I can implement in my parent unit. I will leave the training as a much stronger individual and I believe I will approach missions more boldly than before,” added Knezović. 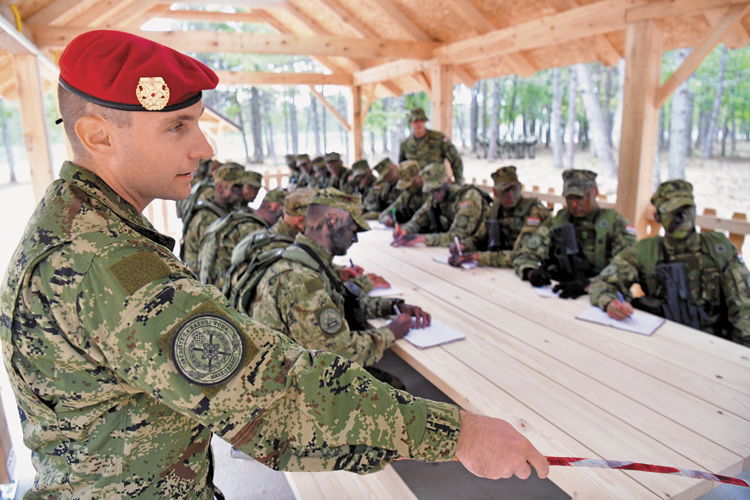 Antonio Jakelić, a member of the 3rd Mechanized Battalion Pauci (Spiders), Guards Mechanized Brigade, remarked that the instructors put the trainees under a lot of pressure so that the latter would learn how to plan and lead units.

“The instructors want to see our reactions in less-than-ideal circumstances. That way, we learn how to react in future assignments or in peacekeeping missions and operations,” said Antonio Jakelić.

The end of the training is drawing near and the instructors are letting the trainees plan out and execute tasks on their own as a preparation for the final, 48-hour long exercise. The exercise will be followed by a march towards Knin, a town in the Dalmatian hinterland where the trainees will receive certificates of completion and badges at a graduation ceremony.

“The march will be a test of the trainees’ physical and mental readiness. When they arrive at Knin Fortress, they will receive badges and certificates of completion. They will be greeted by their families and we hope that they will be proud of what they have accomplished and that they will confidently pass the knowledge acquired here onto their parent units,” concluded Lt. Col. Kasumović.

When CROMIL’s team left Josip Jović Barracks in Udbina, the sun had already set. The trainees had finished supper, but their day was not done yet. They were headed towards classrooms for lectures and preparations for the next day’s training. Bedtime would arrive only at midnight…