Back to homepage »
Share:
The members of the Artillery and Missile Regiment and of the Artillery  and Missile Battalion of the Guards Armoured Mechanised Brigade on 16 and 17 June conducted a playground refurbishment activity, to assist the local community and to Bjelovar 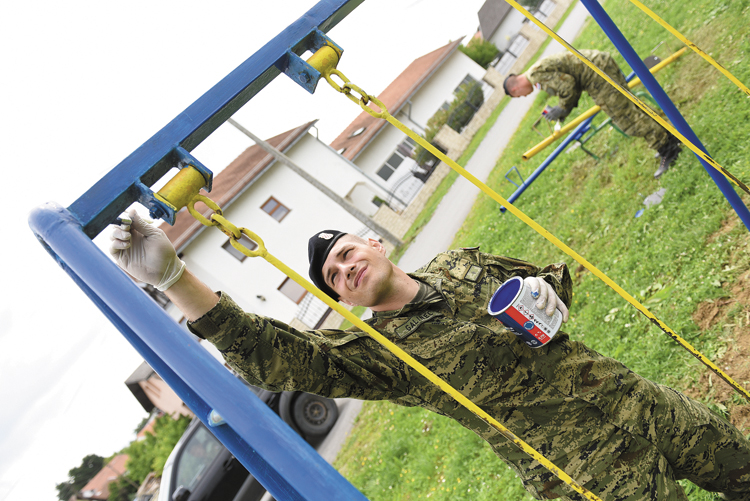 On 16 June 2020 Croatian soldiers gathered in the playground in Bjelovar; they took the necessary tools and set to renovating the play equipment.

Corporal Filip Čulo of the Artillery and Missile Regiment, a native of Bjelovar, said that the soldiers gladly accepted any activity in support to their community, and particularly children, to ensure them the conditions for free play and growth.

“Children need to play outdoors and socialise. Our task was to restore the playground equipment, furbish the surrounding area and remove any potentially dangerous items.  This is a unique opportunity as soldiers are not seen in children’s playgrounds often”, said Corporal Čulo.

The Commander of the Artillery and Missile Regiment and of the Barracks “Bilogora” in Bjelovar Colonel Marijan Cikuš and the Deputy Mayor of Bjelovar Igor Brajdić visited the soldiers working in the playgrounds.

“The Artillery and Missile Regiment and the Artillery and Missile Battalion of the Guards Armoured Mechanised Brigade organised the refurbishment of six children’s playgrounds, for the community where our members work and live. Groups of five soldiers are engaged on each playground, and the Bjelovar municipal authorities provided the necessary material. Ave This activity is a continuation of the successful cooperation with the city administration and the Bjelovar – Bilogora County”, said Colonel Cikuš.

“It is important to us that children have normal conditions for growth and development, so we have refurbished six children’s playgrounds in co-operation with the Croatian Armed Forces, to whom I am extending sincere appreciation”, said Deputy Mayor Igor Brajdić.

The works comprised repainting of the play equipment, replacement of the worn equipment and installing of the wire fence around the playgrounds. A total of ten soldiers were engaged.