Back to homepage »
Share:
The Special MP Company dpsted the bilateral interservice and interdepartment training event taking place in the Barracks "Fleet Admiral Sveto Letica-Barba" in Split from 14-23 May 2018. 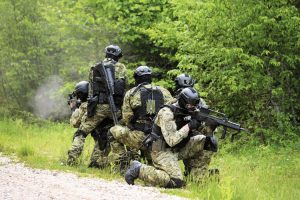 The Special MP Company dpsted the bilateral interservice and interdepartment training event taking place in the Barracks “Fleet Admiral Sveto Letica-Barba” in Split from 14-23 May 2018, which crowned the 3-month training cycle of the Special MP Company. The training also engaged the members of the Special Police of the Ministry of the Interior (MoI) and the visitors – the team of the Slovenian Military Police Special Tactics Team  (PEST). It was partly conducted in the Barracks„“Josip Jović“ at Udbina. During the 10-days training  we have conducted activities pertaining to urban warfare, nighttime or low visibility operations, the use of coercive means by the authorised police officials and Military Police officers.   Daytime and nighttime training activities are conducted in the Barracks “Fleet Admiral  Sveto Letica-Barba“ in Split, which offers excellent infrastructure for the training and practice of tactics, techniques and procedures in realistic conditions. The Croatian Navy and the Croatian Air Force have provided us the support by lending a vessel of the Fleet and a helicopter of the 93rd Air Base , and also the Fire Department of Split. In view of the sequence and complexity of the training subjects, the fire tower of the Split Fire Department was assigned as the first post for the individual, team and unit-level preparation, followed by the fast inflitration techniques with helicopters onto the objects, platforms, vessels or other inaccessible spots“, explained the Commander of the Special MP Company, Captain Andrej Smolek. 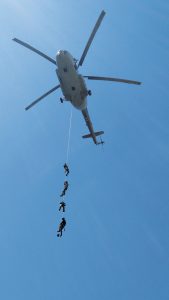 The “Hrvatski vojnik“ magazine team observed the exercise conducted in the Barracks “Josip Jović” at Udbina , in which the members of the Special MP Company, of the MoI Special Unit and of the Slovenian Military Police Special Tactics Unit recreated a possible scenario in the Military Police scope of tasks (locating,  identification and establishing contact with the Diversionist  Terrorist  Group (DTG); the group “created problems“ to the Military Police, which had to locate, identify and try to put it under control through  negotiation. “The group returns  fire and attacks the authorised official; the Military Police forces establish contacts and pursues the group; the tactical teams use fire and manoeuvre to neutralise the situation permits the use the coercive means and firearms are being obtained. We establish contact and go in pursuit and in close combat using tactical teams with fire and maneuver neutralise the DTG through target situation simulating the enemy“, explained the Special MP Company Commander.  The exercise engaged 32 members of the Military Police, two MoI specialist teams  and a Slovenian Army MP team. The participants practice the basic and specialist military skills, e Slovenian Military Police. Participants in training, on this occasion, apply and train basic and specialist military skills, and police procedures in accordance with the Military Police and the  MoI Special Police scope of tasks. Through the scenario of neutralisation of a terrorist group, the participants practiced the use of the coercive means ( firearms) through instinctive and situational shooting. “The weapons  used in the exercise were the automated  rifle, the HS 9 pistol  and the combat shotgun, which is used as a weapon and as a forced entry tool, enabling the executive tactical team overcome all obstacles without constraints, using the effect of speed, initiative and safety.  The participants used the standard ballistic protection, the protective helmet and eye and ear  protection and other standard MP equipment“, said Captain Smolek . 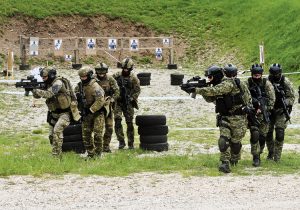 The training continued in the barracks in Split, with the practicing of urban warfare operations in day and nighttime or low visibility conditions. The participants used the optoelectronic devices, targeting devices, tags and devices for combat identification, the radio devices and tactical light, enabling them to conduct operations in any weather or space conditions unrestricted. The following part was the operation at sea, when members of the Special MP Company, MoI Special Unit and the PEST conducted a joint Maritime interdiction operation exercise,supported by the pilots and helicopters of the Croatian Air Force and Croatian Navy crews. It was a standard NATO navies procedure, entailing the forced embarkation to check the passengers on board, the cargo, the documentation etc  in  cases when the crew of a vessel refuses to co-operate The Navy members applied  the fast roping insertion-extraction system (FRIES). “This exercise boosted the inter-service and inter-departement co-operation aimed at integrating the capabilities and efficiency of the Croatian Navy, the Croatian Air Force and Military Police and the Ministry of the Interior’s Special Unit in a dynamic environment and highly complex  operational conditions, and at optimising the command and control system at all levels. It served to test the capabilities of all participants and was planned, coordinated, supervised and conducted in accordance with the commander’s intent. This part of the Exercise was also conducted towards greater safety and stability at sea, in line with the guidelines from NATO’s Maritime Interdiction Operational Training Centre’s 9th Annual Conference titled “ Fostering Projection of Stability through Maritime Security: Achieving Enhanced Capabilities and Operational Effectiveness“. “The Republic of Croatia and its  Armed Forces participate actively in the development of capabilities and international efforts supporting the target, said Captain Smolek. 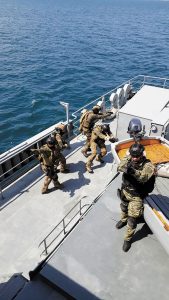 “The co-operation was initiated by the the Deputy Prime Minister and Defence Minister Damir Krstičević, who issued the guidelines to gather the simile units at all levels in the Croatian Armed Forces and in the Ministry of the Interior , through strategic goals, at the operations and tactical levels to upgrade the homeland security system. The Special Police of the Ministry of the Interior is simile to our unit, as we use similar tactics, techniques and procedures, so this event was much useful for our members  and for their future efficiency; This has been the first practical training in cooperation with the Command of the Special Police of the MoI . The Special Security Company  conducted a drill in VIP security  jointly with the Special Security Affairs Directorate and the tactical teams of the Special Police of the of the Ministry of the Interior and the Special MP Company of the Croatian Armed Forces. They demonstrated adaptability, cooperability and ability to conduct specialist tasks related to VIP static and mobile protection“, said  Captain Smolek about the initiative for the 10-day international and inter-department co-operation and training with members of the Special Police of the Ministry of the Interior and the Special Tactics Unit Slovenian  Military Police, which was highly useful for all of them.  This was also the second cycle of visits and joint practices within the bilateral cooperation of military police the Croatian Armed Forces and of the Slovenian Army, according to the agreed plan of joint exercise and practice in MP domain.  Last year  the host was Slovenian MP stationed in Ljubljana, and the training was conducted in a military training range near Postojna.  Our cooperation began last year, when the members of the Croatian MP attended our exercise as observers; and this year we were supposed to do so in Croatia but we were invited to take part. We organise exercises of the kind too, and we apply similar tasks and techniques, and we are very pleased to have had the opportunity to take part”, says 1st Lt.  Blaž Primc, the Commander of Slovenian MP Special Tactics Unit.