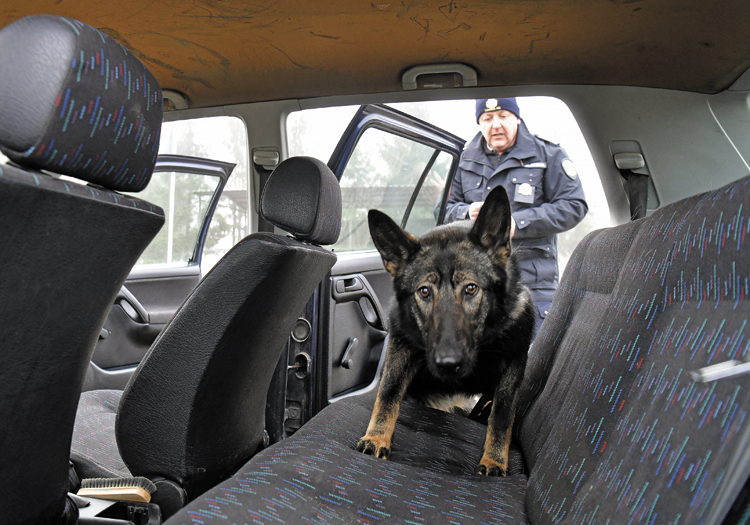 Guided by their handlers – the officers of the Customs Directorate Dubravko Vinter and Damir Predošević – two shepherds are undergoing the training the Military Police’s Handler and Dog Training Centre “Satnik Krešimir Ivošević”. Once the training is over,  the dogs will be assigned to border crossings or toll gates to detect illegal substances. Bela and Bel Bel are the latest “generation“ of ten working dogs trained for the Customs Directorate since 2008 .

“All working dogs trained for the Croatian Armed Forces and for the Ministry of Finance come from our own kennels, which is not too common in NATO“, says Major Barbir. The kennel breeds Alsatians, Malinois and Dutch shepherds“. The Centre co-operates with the Ministry of the Interior on issues of dogs sale, and with the Croatian Kennel Club on issues of training of search and rescue dogs, protection dogs, explosives detection, drug and tobacco  detection dogs, as well as dual purpose dogs.

“Our advantage is that we work with two month- old cubs and train them for specific roles. If we spot a detection ability in a cub we direct him for the purpose by his first year and then start the training. German shepherds have displayed good detection abilities, so we train them for the Customs Directorate. Our Centre also trains dogs for dual purposes, which is a rarity. Last year we trained one dog for  drug and arms detection and assigned him to the Directorate”, says Major Barbir.

“In addition to training working dogs for tobacco and drug detection for the Customs Directorate, we have launched arms detection training. We did train the dogs for dual purposes before, but we have now introduced two scents“, says the Training Centre CSEL  1st Sergeant Damir Zajec.

The detection dogs training comprises 150 working hours, over a six-month period. It is divided into  a in-class training for handlers, familiarising with the basics of vet medicine,  cynology and dressage and the hands-on training. The dogs working life is 7-9 years but can be extended depending on their health condition. The training programme is exercised aboard ships, helicopters, roads, border crossings and other locations they may be assigned to.

“The training is proceeding as planned.  We have expert and motivated handlers and dogs keen to learn; they are sisters but very different in character – Bela is more impulsive, agile while Bel Bel is more detailed and systematic. We match them with the handlers so they understand each other  well. The two shepherds are focussed on detection, and search new spaces (outer space, trunks,  lorries, vehicle interior -each day“ says senior instructor for dog training Staff Sergeant Zdenko Mirt .

“After the 6-month training the dogs take the final test comprised of three disciplines –  the examination of the interior , inspection of the means of detection, which in this case is tobacco or tobacco products; vehicle detection and luggage detection. Successful performance of all disciplines is required to obtain a 12-month licence. All dogs are tested annually”, says  St. Sgt. Mirt.

“The handler and the working dog are a team and need to complement and assist each other, The dog performs search and is a detection aid while the guide is leading it,” concludes Sergeant Mirt.

“We train together and enjoy support from our instructor. Bela has already learned a lot about  but we are students yet and there is still a lot to learn” says Dubravko Vinter, an officer of the Customs Directorate Mobile Sector.  He and his colleague Damir Predošević of the Mobile Units Service in Vukovar, agree that the two dogs  were already skilled in scenting  tobacco. 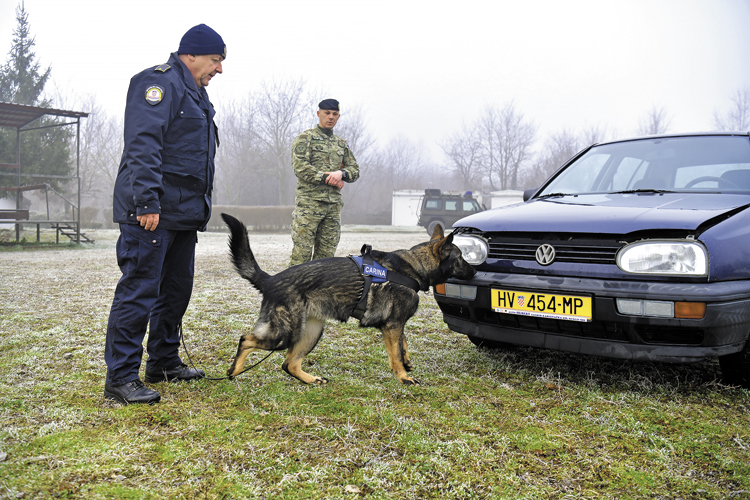 “Bel Bel will be the only dog ​​on the east  border (at the Bajakovo Border Crossing), and I am sure that  we will work well and detect important quantities of tobbaco“.

The two trainees and Željko Biloš – the official dog handler/instructor of the Customs Directorate –  commend the co-operation with the Military Police and the staff of the “Satnik Krešimir Ivošević” Training Centre.

Željko Biloš is the first officer in the Customs Administration to receive in 2008 a working dog – labrador Mango, retired in 2019 – trained in the Military Police Training Centre.

“The handler and the dog the service dog are one team and they need to complement and upgrade each other, helping each other. The dog is involved in the search and is a detection aid while the guide is leading it,” concludes Sergeant Mirt.

The customs officers and the dog handlers  state that  Bela and Bel Bel, who seemed to eagerly await new orders, were the first dogs they were to work with, and although still playful,  they had learned a lot of stuff.

Both officers  underlined the co-operation with the Military Police and the “Satnik Krešimir Ivošević” Handler and Working Dogs Training Centre, as well as the service dog guide and instructor at the Zagreb Customs Administration’s Mobile Unit Zeljko Biloš – the first officer of the Customs Directorate to receive a working dog trained at the  Centre, the labrador Mango, who was trained in drug detection and retired last summer.

“We became close, and it really boosted our success. The thing is, Mango and I detected 1,225 kg of various narcotics. Ten dogs, including Mango, have been handed to the Customs Administration and assigned to customs offices throughout Croatia since we commenced co-operating with the Ministry of Defence. Some of them guard more than one county – the Zagreb office covers the City of Zagreb, the Zagreb County, the Sisak-Moslavina County the  Karlovac County and a part of Krapina-Zagorje County.

Dogs were mostly used for drug detection before, but in recent years they have been trained to hinder the smuggling of tobacco products which has caused a major problem for the Croatian economy – more than 70 t of tobacco intended for black market were seized in 2019 alone. 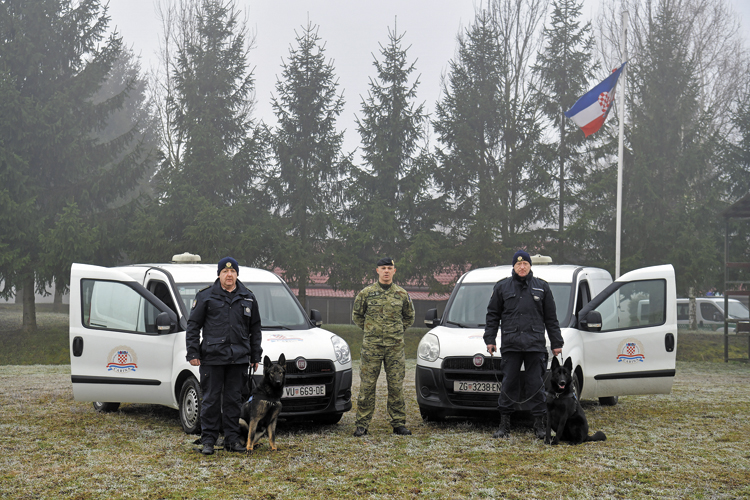 After his working life is over, Mango will spend his well-deserved retirement with his former handler, and the German shepherd Kala will take up his „job“.

“Kala is very  amiable and keen to work. She is the first working dog in Croatia trained to scent drugs and arms, and I am looking forward to working with her“, says Željko Miloš of the Zagreb Mobile Units Service of the Customs Directorate.

The “Satnik Krešimir Ivošević” Training Centre staff say that following the retirement the working dogs get adopted by their handlers.

Mango the working dog detected 218 kg of various narcotics on one search in 2018.