Back to homepage »
Share:
“Together with our allies, we continue to strive for the ideal of a complete, free Europe, a Europe living in peace,” President Kolinda Grabar-Kitarović said 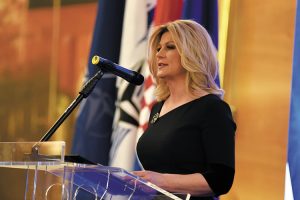 The highest state officials and numerous other guests gathered at the central ceremony marking the 10th anniversary of the accession of the Republic of Croatia to NATO in the Crystal Ballroom of the Westin Hotel in Zagreb on 29th March.

At the start of the ceremony, the guests were greeted by Miroslav Tuđman, who expressed his satisfaction and pride because of the success that the Republic of Croatia has enjoyed in NATO so far.

In her speech, the President stressed that Croatia had acted as an added value to NATO in the preceding decade, giving its contribution to the new world order and the determination to promote the ideals that lead the joint Euro-Atlantic territory into a better future. She also reminded how it was necessary to recall all Croatian defenders on that day, since the defenders had laid the foundation for the modern Croatian Armed Forces with their courage, valour and professionalism. Further, she thanked all members of the Croatian Armed Forces for readily executing all of their tasks at home and abroad. “Together with our allies, we continue to strive for the ideal of a complete, free Europe, a Europe living in peace,” the President said. 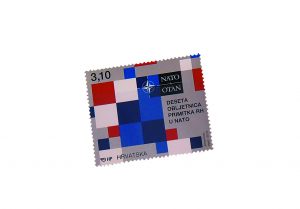 The Speaker of the Croatian Parliament Gordan Jandroković said that Croatia had proven itself as a reliable and solidary member of NATO not only among its allies, but also among the population in the countries where it had been participating in missions for the last ten years. “Our added value is that we promote an open-door policy and the expansion of NATO to South-east Europe so that the region would become an area of peace, security and stability,” Gordan Jandroković underlined and reminded that Croatia had been one of the first countries to ratify Montenegro and North Macedonia’s accession protocols.

The Prime Minister assessed that Croatia had demonstrated that it was a valuable ally and announced that it would continue following the same policy in NATO as before. “That is good for our security; it is our contribution to the security in this region and the whole world,” Andrej Plenković concluded.

The Vice-President of the NATO Parliamentary Assembly Michael R. Turner said that Croatia’s experience as a NATO member country was a positive example to all future members of the Alliance.

Minister Krstičević emphasized the role of Croatian soldiers in NATO’s missions. “The Croatia soldier is highly appreciated and respected. We are the ambassadors and guarantees of peace of security in Croatia,” Krstičević concluded.

On the occasion of the 10th anniversary of the accession of the Republic of Croatia to NATO, Croatian Post issued a stamp which was presented at the ceremony. The ceremony also featured the screening of the film “Ten years of the Republic of Croatia in NATO” as well as a performance by the Croatian Navy’s Vocal Ensemble “Sveti Juraj” and the Jazz Band of the Croatian Armed Forces. 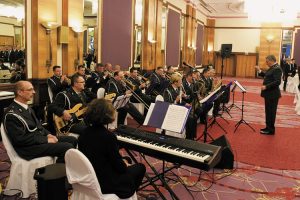 The commemoration of the 10th anniversary of the accession of the Republic of Croatia to NATO officially began with a ceremony at NATO Headquarters in Brussels on 22nd March. The ceremony also featured a performance by the Jazz Band of the Croatian Armed Forces, who performed at NATO Headquarters for the first time. The ceremony was attended by the Prime Minister of Croatia Andrej Plenković, the Chief of the General Staff of the Croatian Armed Forces General Mirko Šundov and Assistant Defence Minister for Defence Policy Petar Mihatov.