Back to homepage »
Share:
The sixth consecutive bilateral exercise Sava Star 18 engaging a total of 156 members of the Croatian Armed Forces and of the British Armed Forces, was conducted in the Training Range “Crvena zemlja“ near Knin from 24  August – 7  September 2018 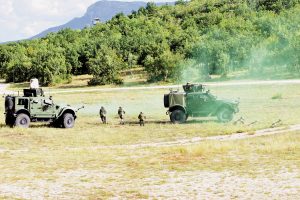 Minister Krstičević underlined the importance of building alliances and strengthening partnerships with other countries in a time pervaded with security threats and stated that the Exercise continued the years-long co-operation with the British Armed Forces. “Croatia and the UK are taking part in international military operations together contributing to global security and peace. The joint training activities are an opportunity to exchange experiences, upgrade the operational capabilities and interoperability of our forces. I am glad that this years-long co-operation sees continuation, outcome and the room for expansion“, said Minister Kstičević, who also announced an agreement on strategic partnership between the two countries by the end of the year. Speaking of equippedness of the Croatian soldiers with Croatia-made equipment and weapons the Minister said: “We are not using products of the Croatian military industry merely because they are domestic products but because they are among the best in the world“.

The Chief of the General Staff said the joint training events were excellent co-operation in the critical domain of security, particularly at present, considering the threats and risks going global and often unpredictable and affecting the security and stability. “I believe that the UK and Croatia and their armed forces share the common interest in the  stability of Europe and NATO’s involvement and in joint contribution to world’s peace and stability and in searching for solutions to security challenges. Joint training of our troops is surely one of the ways in this journey, and I am therefore extremely pleased with the strengthening of defensc cooperation. 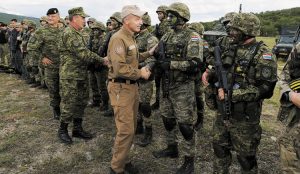 We prove to be strong strategic partners, and the United Kingdom is one of the most important European allies for the Republic of Croatia in defence and security.  International exercises, such as Sava Star, are of high importance for the Croatian Armed Forces as they upgrade their capabilities within NATO and ensure full interoperability with NATO nations“.

The UK Deputy Ambassador Peter Clemens stated that  the importance of the strategic partnership between Croatia and the United Kingdom which is now very strong. While being partners within NATO, the exercises such as Sava Star add value to the bilateral partnership. We can exchange skills, knowledge and experience. ” The UK Defence Attaché, Lieutenant Colonel John Kelly stated “We have to learn from each other.  We can learn a lot from our Croatian friends  and in exchange we demonstrate our operating techniques“. The demonstration module featured  hand-to-hand combat; close conflict and combating the enemy, and the members of the two respective forces showcased the assault and defensive abilities in  close combat actions. .