Back to homepage »
Share:
As part of the Croatian Army and British Army’s seventh bilateral exercise, members of the 2nd Mechanized Battalion Gromovi (Thunders) and the Queen’s Own Yeomanry demonstrated an attack on a fortified enemy position and ambushing infantry patrol at the Crvena zemlja (Red Land) Training Area… 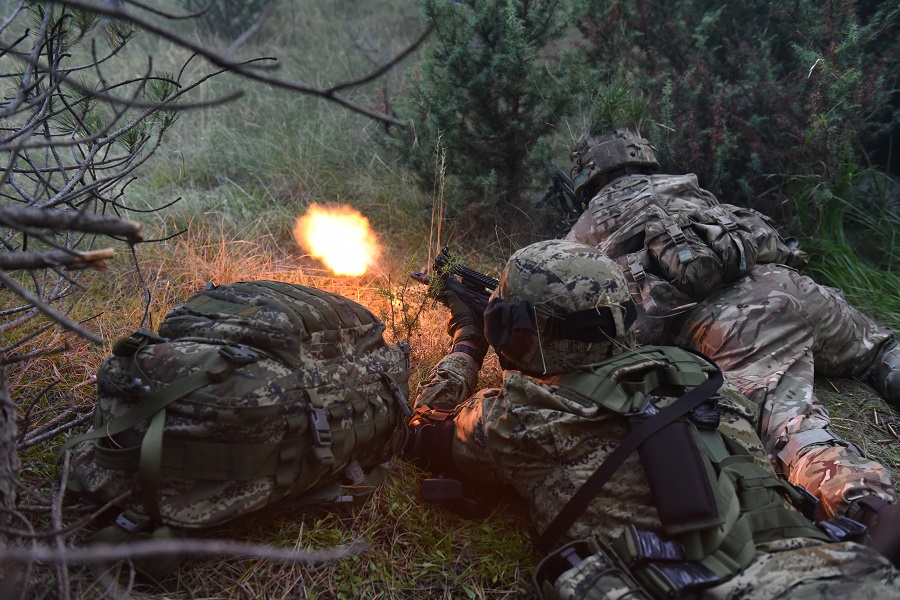 We are standing on an elevation at Crvena zemlja (Red Land) Training Area and observe a point several hundred metres ahead of us. It is a machine-gun nest, but it has been well camouflaged with branches and bushes so that guards in positions cannot make it out. Soon, we notice some fifteen soldiers on our right approach the nest. We are too far away to see them, but we can discern their uniforms: they are members of Croatia’s 2nd Mechanized Battalion Gromovi (Thunders) and the United Kingdom’s Queen’s Own Yeomanry, Royal Armoured Corps. Then, it is show time – fire is opened on both sides. Soldiers attacking the machine-gun nest are not alone. They are supported by soldiers hiding on an elevation. The noise grows louder and louder. After ten minutes, the shooting stops. We descend towards combat positions. The attack team (a.k.a. the “blue” team) has seized the nest from which 7.62x51mm L7 General Purpose Machine Gun (GPMG) and 5.56x45mm L85A2 (SA80) assault rifles had been clattering. All participants (the “blue” team and the “red” team) line up and listen to two senior officers: the Commander of Guards Mechanized Brigade Brigadier General Tihomir Kundid and the Commander of 4th Infantry Brigade and Headquarters North East Brigadier Oliver Jones. Both men praise the soldiers and their execution of the operation while emphasizing the importance of the event they were taking part in. The event is Sava Star 19, a traditional bilateral exercise conducted by the Croatian Army and British Army. It is being held for the seventh time from 5th to 22nd September. For the Croatian Armed Forces, the objective is to train infantry platoons/companies for engagement in an international environment and to provide support to the training of the British Armed Forces’ light armoured reconnaissance unit.

Overall, the training group at Sava Star 19 comprises some 200 Croatian and British soldiers. What CROMIL’s team witnessed was a military exercise demonstration for the members of the Diplomatic Corps and Military Diplomatic Corps, employees of organizational units in the Ministry of Defence of the Republic of Croatia and the Croatian Armed Forces as well as soldiers from some allied armed forces.

“Conducting this interesting activity with the Brits is a whole new experience,” says Private Natalija Mladenović. Equally interesting are the conversations between soldiers off field: “We discuss weapons and equipment; the differences are astonishing. As far as procedures go, they are similar in some aspects, but dissimilar in others.” 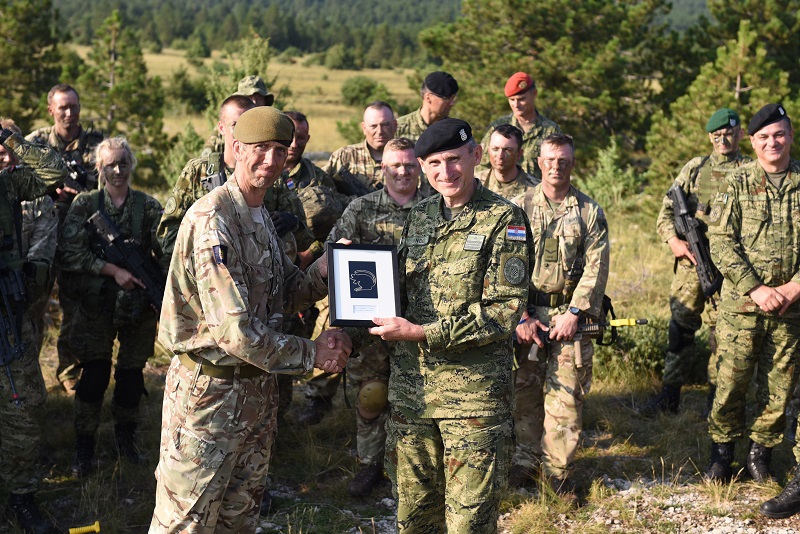 “Today’s attack was really good. We had been practicing all day today and last night, getting routines together and adjusting differences. The Croatians led the attack brilliantly; they were very quick. I like Croatian radios, which are smaller and lighter than what we carry. However, the most interesting piece of equipment is probably the VHS-2 rifle. The terrain here is different to what we are used to. We train mostly in the rainy north of England, where we have a lot of open fields,” said Second Lieutenant Geraint Bartie of the British Armed Forces.

The attack on an enemy stronghold was not the only activity demonstrated by the two allied militaries that day. Shortly after the first exercise, the soldiers made their way to a wooded part of the training range. They moved into positions and kept a watchful eye on a road twenty metres downhill. The location was ideal for laying an ambush for an enemy infantry patrol. The same scenario as before was repeated: shooting occurred and the “blue” team won in the “finale”. The commanders expressed their satisfaction at the manner in which all the tactics and procedures had been jointly implemented by both armies, who made the most of what the Crvena zemlja Training Area had to offer. CROMIL’s team witnessed the field part of the exercise, which was conducted without a break for six days. A mixed company of British and Croatian soldiers continuously undertook practice operations throughout that time period. Captain Frano Šesto, Commander of the 1st Company, 2nd Mechanized Battalion Gromovi (Thunders), acted as liaison officer, bridging the communication gap between the two militaries. “All the Croatian participants agree on one thing: such activities increase the interoperability between us and our NATO partners. With combined training, we upgrade our capabilities for conducting joint operations, as well as those skills that are inherently ours. The Gromovi are also glad to be on the Crvena zemlja Training Area. Though we train on all the ranges in Croatia, this is the one where we spend the least time,” concluded Captain Šesto.

The usage of the word yeoman was first recorded c. 1300. Originally, it denoted a freeholder ranking just below noblemen. In later usage, it referred to a servant in a royal or noble household.

The Queen’s Own Yeomanry is a light cavalry reconnaissance regiment of the UK’s Army Reserve. Overall, there are four such regiments in the British Army Reserve with the traditional term yeomanry in their title.

The Queen’s Own Yeomanry has been active since 1971. It is made up of five units from the Midlands, north of England and south-west of Scotland comprising reservists who serve in various parts of the world, if required. Among others, they have taken part in Operation Herrick in Afghanistan and Operation Telic in Iraq.

The regiment is based at Fenham Barracks in Newcastle upon Tyne and has squadrons in York, Wigan and Chester.