Back to homepage »
Share:
Contract reservists of the Croatian Armed Forces continue lining up achievements: brother Valent and Martin Sinković have defended the world title in the men’s coxless pair at the World Rowing Championships in the Austrian municipality of Ottensheim. This is the second world gold for the Sinković brothers in their “new” discipline, which is considered one of the most difficult disciplines in rowing … 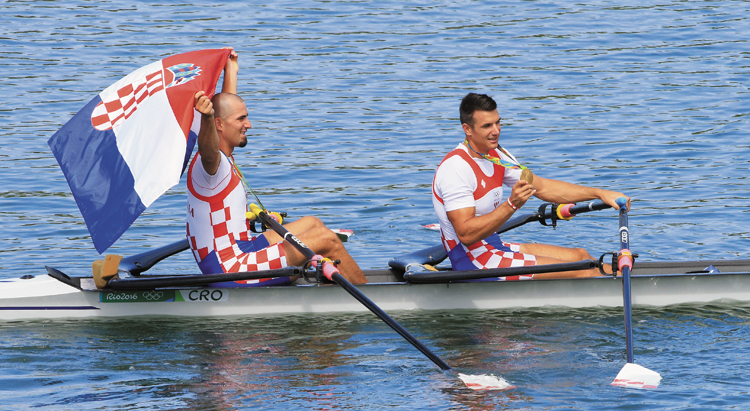 Brother Valent and Martin Sinković have defended the world title in the men’s coxless pair at the World Rowing Championships in Ottensheim, an Austrian municipality 20 kilometres away from Linz.

Valent and Martin did a fantastic job in the race. They dominated from the start and had a length’s advantage over runners-up Michael Brake and Thomas Murray from New Zealand after 500 metres. In the continuation of the race, Valent and Martin did not afford surprises. They kept up the speed, dis a good job at the finish and rightfully defended the world title. The Sinković brothers thus repeated their success from last year’s championship in Plovdiv, Bulgaria. This is the second world gold for the Sinković brothers in their “new” discipline, which is considered one of the most difficult disciplines in rowing.

The Sinković brothers are also double European champions in the men’s coxless pair; they were gold medallists in Glasgow, Scotland in 2018 and qualified for the Summer Olympic Games in Tokyo, Japan by becoming European champions again in Luzern, Switzerland earlier this year. In Tokyo, the Sinković brothers will have a chance to win a medal in their third discipline.

At the Summer Olympic Games in London in 2012, they, Damir Martin and Davor Šain won a silver medal in the men’s quadruple sculls. The brothers later became Olympic champions in the men’s double sculls in Rio de Janeiro in 2016.

“We’re doing great. The race was phenomenal. The entire regatta was amazing. We got better with each race. We rowed as planned and everything worked well. It is the best feeling in the world to row to the top of your abilities,” said Valent Sinković.

When asked about their plans for the future, Valent replied: “One never knows what might happen. For the moment, we are focused on competing in the men’s coxless pair at next year’s Summer Olympics in Tokyo. We will certainly row one more quadrennium, but we have not decided in which discipline we will row.”

We asked Valent how he and his brother decided to switch disciplines and how difficult it was to get accustomed to rowing as a coxless pair: “The decision to switch disciplines turned out to be a good one. We are extremely pleased. The transition cost us a lot of time, work and patience, but we feel at home in this discipline. We made the decision after the Summer Olympics in Rio de Janeiro. We had already won everything there was to win in the men’s double sculls, wondered if we could enjoy success in a single-oar discipline and spontaneously decided to give it a try. It was excruciating; we had to train a lot and had many ups and downs, but we made it. We were not consistent at first and swung back and forth, but we have improved and have two world titles to our names.”

Given the good form they are in, the Sinković brothers have a reason to hope for success in Tokyo.

Damir Martin is a 31-year-old contract reservist of the Croatian Armed Forces from Vukovar and a silver medallist in the men’s single scull at the 2016 Summer Olympic Games in Rio. In Ottensheim, he failed to qualify for the A finals, having placed fourth in his semi-final group. However, by coming in second in the B finals, he qualified for the Olympics in Tokyo, which will be his third Olympics overall. He won a silver medal in the men’s quadruple sculls in London and won another silver medal in the men’s single scull in Rio.

“The competition was tougher than ever. The best six rowers in the finals finished within two seconds of each other, which has not happened in years. The B finals had not been this close in a while, with four rowers competing for three slots at the Olympics. The most important thing was to stay healthy, keep a cool head and finish the race,” Damir Martin said and added: “I was overjoyed. I cannot begin to tell you how tough it’s been for me. I had worked hard for three years, but it all came down to that week and the Olympic qualifiers. The Olympic Games are special for us; it is what we work, fight and train for. This was my last chance to qualify this year. I could have had one more shot at it next year, but I wanted to qualify this year so that I can spend the next year preparing for the Olympic Games in peace.”

Damir also revealed his plans for the future. “Emotions are running high and this result wouldn’t have been possible without the support from my family. My back injury is behind me and I know how much I am capable of. The competition is stiff. I wouldn’t go as far as saying that the competition is bigger than in Rio, but there is a greater concentration of excellent rowers who are all neck-to-neck, so I know that I must invest all my efforts into training in order to fight for my goals. I hope to be successful and to make my country proud and happy again,” Damir concluded.