Back to homepage »
Share:
The Special Operations Forces (U.S. and Croatian) Joint Exchange Combined Training (SOF JCET) took place in the Barracks “Josip Jović " at Udbina and in the Training Range "Crvena zemlja“ near Knin from 17-31 July 2018. 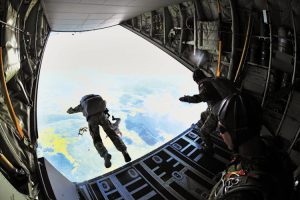 The Special Operations Forces (U.S. and Croatian) Joint Exchange Combined Training (SOF JCET) took place in the Barracks “Josip Jović ” at Udbina and in the Training Range “Crvena zemlja“ near Knin from 17-31 July 2018.  It was a training event focussed on integrating the capabilities of the participating forces to upgrade their performance within the Special Operations Task Group – Land and it also engaged enablers in support to the main forces, Conducted in two terrains it required shuttling  training on two terrains required a lot of travel, the participants decided to take such a step so that they could try as many different terrains as possible, and at the same time be capable of performing tasks in diverse geographic areas.

The emphasis was placed on capability-building (deployment  of the unit to a remote location, self-sustainement, planning, implementing and surveillance of full spectrum special operations) and integratiom of non-organic elements into the Group.

The Croatian special forces had an experienced partner in special operations in the U.S, and could build valuable advice into their capabiloities. Croatia for its part boasts geographical variety for practice in various types of terrain. The training ranges located in mountainous areas  ranges, where they can practice low flying across the hills, have a special value. The training scenario featured the deployment of “international forces“ to a  partner country, setting up of a tactical operational centre and planning and conduct of counter–terrorist operations.  The trainees practiced evacuation of personnel, covert operations and air infiltration into the operations area.

The  “Hrvatski vojnik“  magazine visited the forces amidst the performance of freefall parachutes. The U.S. MC-130J, (the Hercules)  climbed to 2000 m, after which the soldiers would jump out of it. The first parachutes we saw were performed by six U.S: soldiers; they descended from the aircraft forming an invisible spiral the first jumps were made by Americans. The twelve of them boarded in Zemunik, and when the plane caught the necessary height, six soldiers jumped out. Spinning through the invisible spiral, they slowly descended towards the ground, close to each other and were expected to land within a 200-m circle. After the first group landed, the second group, joined by the Croatian soldiers, performed the porocedure.

The parachuters were warned of the turbulence caused by the wind and of the risk of sways during the descent.

“Bora  is getting stronger, blowing our way across those mountains and making it hard to  control the canopy  and can result in injury. The unpredictable conditions, such as the wind gusts, is but a routine situation for special forces, who need to show adaptability,as the Croatian special forces members did, jumping from the aircraft and deploying their parachutes  halfway down.  Despite the disturbance caused by the wind, they managed to land in the marked drop zone..Eight parachuters that followed were equally efficient.  The members of the Croatian forces were satisfied with their overall performance in the joint training with the U.S: side,

“We are equal with our U.S: partners in performing  jumos and in landing accuracy“, said an officer participant. The forces took the same practice in the Training Range “Crvena zemlja“ the same day, and ushered in the final activity – night- infiltation with  50-60-kg weapons and gear and live firing in defence of the territory , combating both the opposing force and the weather conditions. The two countries special forces managed the challenge in the joint training just as well.