Back to homepage »
Share:
“The secret to winning lies in a squad’s joint dedication and training. As for our squad – we were simply the best,” said Sgt. Ivica Budić, leader of the Support Command’s logistics squad that won first place at the Logistics Super Squad Competition held at Gakovo Training Area 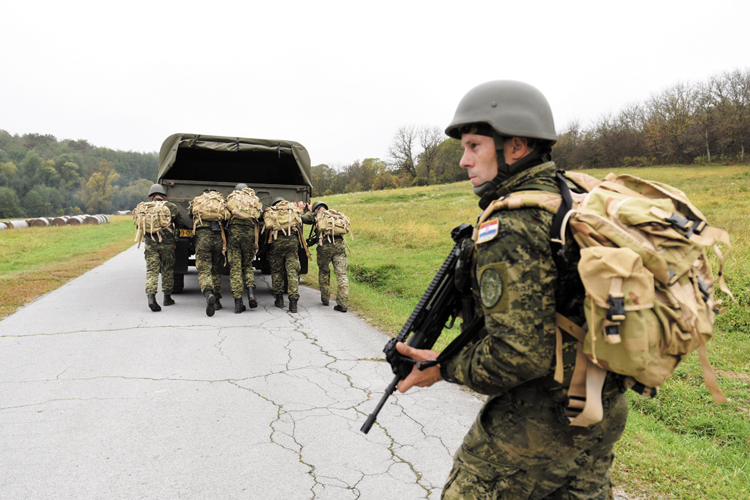 On 17th October 2019, Gakovo Training Area in north-eastern Croatia hosted the 4th International Logistics Super Squad Competition, at which a logistics squad of the Croatian Armed Forces’ Support Command took the grand prize, beating out competition from the Czech Republic, Hungary, Slovenia and the USA. A logistics squad from the Czech Republic was the runner-up, soldiers from Slovenia came in third, while soldiers from Hungary and the USA placed fourth and fifth, respectively.

The first edition of the competition was held in Hungary in 2016, but for the last two years it has been held at Gakovo Training Area in the Republic of Croatia, where the event has been superbly organized by the Croatian Armed Forces’ Support Command. Addressing the participants before the start of the competition, Commander of the Support Command Maj. Gen. Mladen Fuzul highlighted the importance of that competition and similar competitions that gave the armed forces of Croatia and its allies and partners an opportunity to exchange experiences and meet in contest. “By accepting to host this competition, we want to make a contribution to the development of military arts in the domain of military logistics,” emphasized Major General Fuzul.

Each squad was comprised of nine people – a leader and eight other squad members chosen on the grounds of their logistical specialty. Squads were thus comprised of cooks, drivers, infantry weapon repairmen, quartermasters and combat lifesavers (CLS). According to competition rules, the first squad to complete all the tasks on the course in line with the proscribed standards was proclaimed the winner. 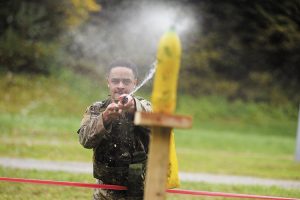 The day before the main competition, representatives of logistics squads had prepared military meals in a cooking competition and the results had determined the starting order for the next day’s main competition. The Support Command’s squad, the winners of the cook-off, started the race at 8 a.m., followed by squads from Hungary, the USA, Slovenia and the Czech Republic, who started the race in 15-minute intervals. The competition was held on an approximately 17-kilometre-long course along which competitors overcame obstacles and carried out military tasks while carrying nine kilograms of equipment. Before crossing the finish line, all competitors had to demonstrate their proficiency in basic military arts and their specialist logistical skills on multiple operating points. Readiness, knowledge, motivation, physical and mental endurance as well as teamwork were crucial for mastering the course, where competitors had to carry out such tasks as navigation using a map and a compass. They were also evaluated in precision shooting using an airsoft pistol and rifle; bombing a target; extinguishing fire with backpacks; passing a contaminated terrain and administering first aid; entering coordinates on a map and mapping out a route; setting up a tent; supplying logistics while crossing infantry obstacles with cases of ammunition; removing malfunctions on a Browning machine gun; constructing temporary embankment; and repairing a disabled lorry. 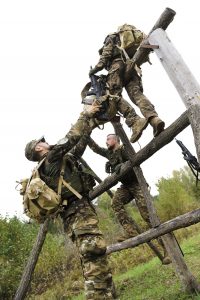 The Croatian Armed Forces’ logistics squad was the first to cross the finish line after several hours of intrepid competition. Although the Czech squad were the last to start the competition (one hour after the Croatian squad), they made up the time and came in second, while the logistics squad from Slovenia rounded out the top three. After crossing the finish line, Sgt. Marijeta Podlesnik of the Slovenian Armed Forces briefly commented: “What mattered the most in this competition was pluck and team spirit. We did not have much time to prepare; we are simply a good, hard-working, fearless and persistent squad.”

The competition went off in line with the rules, in a friendly and competitive atmosphere – a reflection of the soldiers’ sports culture. According to Chief of Staff / Deputy Commander of the Support Command Col. Ivan Raos, the competition was an excellent basis for developing and strengthening the co-operation between between units and partner states. “The fittest competitors will take certificates to their units and thus contribute to the popularization of this competition in the best way possible,” concluded Colonel Raos.

The international competition was also an opportunity for Croatian manufacturers of military equipment and armament to pay a visit to Gakovo Training Area with the aim to strengthen the defence and business co-operation between the participating countries as well as their armed forces. Products were presented by Čateks, Galeb, Galko, Hemco, HS Produkt, Jelen, Kroko, Odjeća, Šestan-Busch, Šešir and RIZ Profesionalna elektronika. 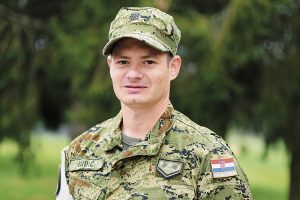 “We could not have known that we would be the best because we had some stiff competition from really good squads this year. In the previous years, we came in first or second; we knew that we were ready, well prepared and favoured to win, but we had to prove that on the course. And we did it. I am proud of my squad because they spared no effort and did everything as planned. The preparations were not long. We pretty much knew who would make the squad, so we prepared individually, after work,” said Sergeant Budić and concluded: “The secret to winning lies in a squad’s joint dedication and training. As for our squad – we were simply the best.”