Back to homepage »
Share:
“He wore the green beret with pride. He had the heart and soul of a commando and he left an indelible imprint on our lives. It was a privilege to have such an NCO. Dear Josip, we shall forever remember the optimism, willingness and ease with which you performed your tasks. You were an honourable Croatian commando and you will never be forgotten,” said Deputy Commander of the Special Forces Command Lieutenant Colonel Mirko Bošnjak 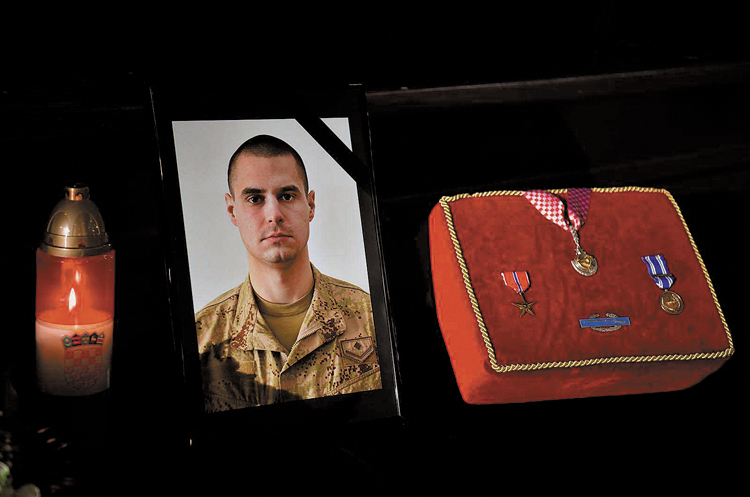 “Josip did not want to be average. He chose the most challenging path – the path of the special forces. He was led by the desire to dedicate his life to serving Croatia. Aware of all perils and challenges, he was ready to defend his homeland and those who were too weak to defend themselves anytime, anywhere. The void left by Josip cannot be filled with words or the flow of time. I urge you to cherish his memory and honour him the way only soldiers know how.” With these words, spoken at a commemoration held at the headquarters of the Ministry of Defence on 26th April, the President of the Republic of Croatia and the Commander-in-Chief of the Croatian Armed Forces Kolinda Grabar-Kitarović said goodbye to Corporal Josip Briški, a member of the 10th Croatian Contingent in Resolute Support who died of severe injuries sustained in an attack on the Croatian Armed Forces’ vehicle in Kabul.

The body of the tragically deceased member of the Croatian Armed Forces was flown in with the Boeing C-17 Globemaster III transport helicopter from Afghanistan on 26th July. The Commander of the Resolute Support Mission General Austin Scott Miller paid highest respects to the fallen Croatian soldier by personally sending his body off. The member of the Special Forces Command was the first casualty from the Croatian Armed Forces in peacekeeping missions and operations.

Corporal Briški’s body was returned to the airport in Zagreb with highest military honours. Along with Corporal Briški’s family, the arrival was witnessed by numerous members of the Special Forces Command as well as the highest-ranking state officials: the President of the Republic of Croatia Kolinda Grabar-Kitarović, Croatian Prime Minister Andrej Plenković, Deputy Prime Minister and the Minister of Defence Damir Krstičević, the Chief of the General Staff of the Croatian Armed Forces General Mirko Šundov with his associates as well as other senior officials from the Ministry of Defence and the Croatian Armed Forces. The representatives of NATO member states Albania, the Czech Republic, France, Germany and the United States of America were also present.

After the arrival of Corporal Briški’s remains at Franjo Tuđman Airport, a commemoration was held at the Ministry of Defence, where family members, numerous state officials, defence attachés and representatives of partner countries’ embassies as well as numerous colleagues and friends said their goodbyes.

Feeling immense pain and sadness, President Kolinda Grabar-Kitarović underlined: “When I first received the news of Croatian soldiers’ calamity in Afghanistan, I believed, hoped and prayed that the worst possible outcome would be avoided, but hope was soon replaced by sadness. Josip succumbed to his injuries and his immortal soul now rests with angels and Croatian warriors who laid their lives in the Homeland War and throughout Croatia’s long history.”

President Grabar-Kitarović stressed that Corporal Briški had possessed all the values adorning the Croatian soldier. He had possessed not only military readiness and competence but also the humane qualities of a true patriot, friend and man.

While expressing his condolences to the Briški family on his own behalf as well as on behalf of the Ministry of Defence and the Croatian Armed Forces, Minister Krstičević said that such moments had a deep impact on the Croatian people.

“By becoming a member of the Croatian Armed Forces, Josip continued to tread the path that had previously been trodden by Homeland War veterans. It is a path of struggle for peace, freedom and security in Croatia and elsewhere. We are aware of the fact that the security of the Republic of Croatia is preserved far away from our homes. By taking up such difficult task, Croatian knights demonstrate their courage and nobility,” Minister Krstičević said. 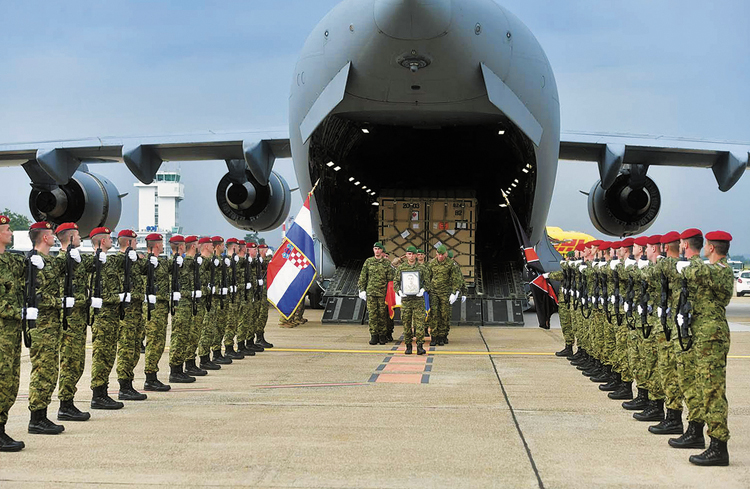 Minister Krstičević put particular emphasis on the fact that Josip had been a professional, model soldier. “He was a son, a husband and a father – he was everything a young man should have been and beyond. Dear Josip, thank you for living and working in congruence with the ideals and values that Homeland War veterans had fought for. Josip’s life and service made him one of the best. He passed into eternity and stands there together with the greatest warriors in Croatian history,” Krstičević stressed.

Minister Krstičević added that, in Josip’s honour, the International Military Operations Centre would be renamed the Josip Briški International Military Operations Centre. Minister Krstičević highlighted that Josip had sacrificed his greatest possession, his life, for the values he had lived for and the ideals he had believed in.

“Josip, thank you for endless loyalty to your homeland Croatia and the Croatian Armed Forces. I firmly believe you are watching over us and protecting us from the eternal homeland in heaven. You will forever stay in the hearts and thoughts of all Croatian soldiers. Your son and wife will never be alone. The Croatian Armed Forces will be with them! May you rest in peace,” Minister Krstičević concluded.

The Chief of the General Staff of the Croatian Armed Forces stressed that death, although inevitable, brought sorrow time after time, especially when it unexpectedly stripped our lives off people like Josip who had exalted our lives with their existence and left a mark with their kindness.

“Like many of us, when I received the news of the tragic attack on Croatian soldiers in Kabul and Josip’s untimely death, I felt a terrible loss, a void and lasting sadness. Josip’s death has deeply affected both the Croatian Armed Forces and all of Croatian public. Today, Croatia mourns its young son,” General Šundov said. 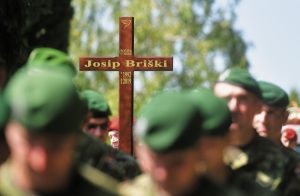 The Chief of the General Staff stated that a soldier’s life was dangerous and unpredictable. No matter how much one prepared for and was aware of looming threats, these were sometimes impossible to avoid.

“Josip was an outstanding soldier. He had gone through first-rate training for the most complex tasks. He joined a peacekeeping mission in Afghanistan with a desire to help build a happier and better life for everyone. Unfortunately, the attack could not be foreseen or avoided. Josip lost his young life doing a job he cherished dearly; only the best soldiers can perform commando tasks with so much love,” General Šundov emphasized.

A funeral service with highest military honours for Corporal Josip Briški was held at Markovo Polje (Mark’s Field) Cemetery in Sesvete, a neighbourhood in the eastern part of Zagreb, on 27th July. The funeral featured an honour guard comprised of the members of the Special Forces Command and the Honour Guard Battalion. Josip’s family, numerous friends, Minister Krstičević, General Šundov and many members of the Croatian Armed Forces said their goodbyes. The funeral was conducted by Military Ordinary Msgr. Jure Bogdan.

The Deputy Commander of the Special Forces Command Lieutenant Colonel Mirko Bošnjak presented the Croatian flag to the late Josip Briški’s wife and held a farewell speech on behalf of all members of the Croatian Armed Forces. “He wore the green beret with pride. He had the heart and soul of a commando and he left an indelible imprint on our lives. It was a privilege to have such an NCO. Dear Josip, we shall forever remember the optimism, willingness and ease with which you performed your tasks. You were an honourable Croatian commando and you will never be forgotten,” said Lieutenant Colonel Bošnjak in the final farewell to the late Josip, while expressing his condolences to the Briški family.

The Republic of Croatia and the Croatian Armed Forces bid farewell to the late Josip with volley shots.

A memorial service for the late Josip was held at the All Saints’ Church in Sesvete. 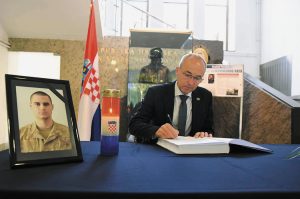 A condolence book for Croatian soldier Josip Briški, who was fatally killed in NATO’s peacekeeping mission Resolute Support in Afghanistan, was placed at the Ministry of Defence. Among others, the Minister of Defence Damir Krstičević and the Chief of the General Staff of the Croatian Armed Forces General Mirko Šundov recorded their condolences.

On the occasion, Minister Krstičević wrote: “Dear Josip! You have boldly and honourably joined the ranks of the greatest heroes and warriors. Thank you for your endless loyalty to your homeland and the Croatian Armed Forces. You will forever stay in the hearts and thoughts of all Croatian soldiers!”

While bidding farewell to the deceased soldier, General Šundov pointed out: “We have begun today’s day by placing and recording soldiers’ condolences into the condolence book as well as by taking a moment of silence in honour of Josip. Our thoughts are with his family and with the wounded soldiers in Afghanistan.”

At Josip’s burial, the members of the Special Forces Command recited the Commando Prayer in his honour. It is a prayer recited by every member of the special forces upon successful completion of commando training:

Lord, my God, I ask of Thee what no one ever asks for.

I ask of Thee storm and uncertainty.

I ask for the most heavy obstacles imaginable and that I am never at an advantage.

Give me as heavy a cross as possible to bear on my path.

Please, grant me fear so that I may overcome it.

May I never not be free of hardships,

for they are a means of landing in Thy eternal embrace.

persistence in the pursuit of my enemies and determination to jump.

May my body trust Thy equipment

and my soul trust Thy hands.

God, grant me the millennia-old gallantry of Croatian knights

God, grant me the pride of all Croatian fortresses

that stand tall and manifest Croatian might to this day.

Above all, God, I ask Thee to help me stay alive.