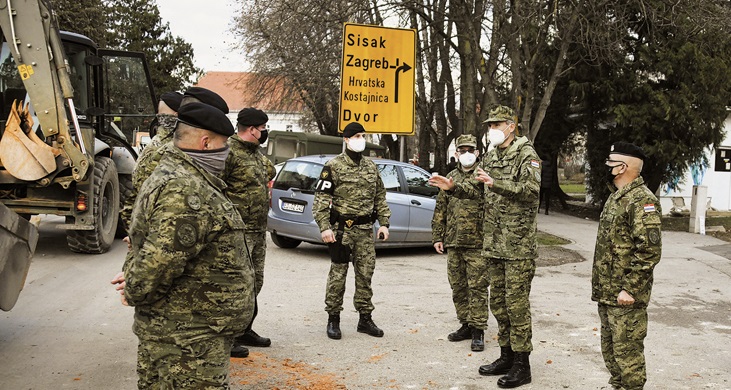 On the first day of the earthquake 250 members of the Croatian Army with the necessary machinery were engaged in Petrinja. Concurrently 400 soldiers were in the Barracks “Pukovnik Predrag Matanović” ready to engage at any moment. Since then, the Croatian Army has daily engaged 300-350 members in relief efforts and the distribution of humanitarian aid.

Major General Tihomir Kundid is the Deputy Commander of the Croatian Army. Since the strong earthquake that hit the Sisak – Moslavina County on 29 December 2020, he has stayed in Petrinja commanding the Croatian Army forces engaged with clearing the effects of the in the area to repair the consequences of the earthquake.

During the Operation “Storm” in the summer of 1995 Major General Kundid was a member of the Brigade “Gromovi”, assigned with liberating then occupied Petrinja.

You were a member of the Croatian Army in 1995 and one of the servicemen who saved Petrinja from a dire situation. You are doing the same now. Is the past time anyhow linked with the present?

In the Police and Military Operation “Storm” I was among the forces engaged along the avenue of attack and assigned with liberating Petrinja. I was among the first soldiers to enter Petrinja, but I can say that the destruction I saw in the heart of the town was far from the damage I saw on coming here on 29 December. The damage caused by the earthquake here was much greater than that which Petrinja saw during the war.

You saw the impact of the earthquake hitting Zagreb in March 2020, you were among the first who arrived to the spot as the Croatian Army members were assisting and rescuing. Were you surprised with the situation in Petrinja?

It was a shocking scene and I did not expect the city centre to be so damaged and destroyed. A 13-year girl lost her life in the earthquake in Petrinja, and six other people in Majske Poljane, but on seeing the extent of the destruction at first I even expected more   victims.

The Zagreb earthquake was devastating too but far less than the one striking Petrinja. Zagreb did not see so many devastated buildings and such damage as Petrinja did.

In addition to the primary task of the Croatian Army, which is to defend the sovereignty and territorial integrity of the Republic of Croatia, one of the essential elements of our mission is to assist the population in the event of natural disasters or other disasters. As a function of with our personal potentials and material resources, the Croatian Army is a powerful force that can effectively handle the effects of a disaster. The Croatian people have faith in the Croatian Armed Forces because they know that we are superbly organised and trained and that we shall respond and assist them instantly. We serve our homeland and our people, and we are by our people in its hardest moments, providing uncompromising support. 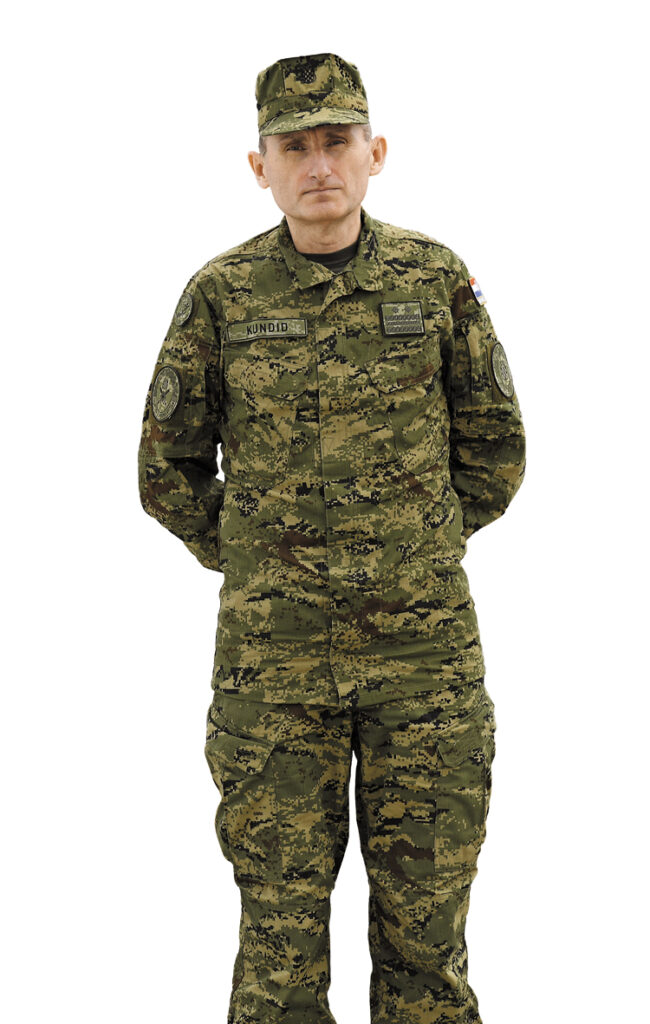 What were the first tasks of the Croatian Army after this great earthquake?

Our task in the first phase was to inspect all partially or completely destroyed buildings and take care of the injured citizens. We used the Orbiter 3 UAVs to determine how risky the partially destroyed buildings were in the event of aftershocks. Also, with a thermal camera we monitored the situation and searched for survivors under the rubble.

The later phase saw the engagement of the engineer units, which cleared the construction material from the collapsed buildings to ensure road passability. These were our primary tasks during the first two days. In the evening of the first day we set up mobile teams and dispatched to the villages around Petrinja to provide assistance to the local residents.

After the clearing of the construction material blocking the roads our priority was the instalment of mobile homes and shipping container homes to provide the locals whose homes were destroyed with acceptable alternative accommodation within the shortest time possible.

On 29 December 250 members of the Croatian Army with the assigned engineering machinery were engaged in the town of Petrinja. At the same time, 400 soldiers were in the “Pukovnik Predrag Matanović” barracks and were ready for engagement at any moment.

Since then, the Croatian Army has engaged 300-350 members every day on earthquake rehabilitation and humanitarian aid distribution tasks.

In the first days we also relied on the Croatian Air Force’s helicopters to evacuate the patients in grave conditions. The strong earthquake damaged all important institutions in Petrinja and urgent evacuation of the nursing home was necessary. They were transported to the recently built and safe facilities within the Barracks “Pukovnik Predrag Matanović”, with high static resistance to earthquakes, alongside the people who were left homeless to the earthquake. At one time the Barracks offered the accommodation for 406 people, and a number of people are still staying there.

As container homes and mobile homes are still delivered, we continue with our task or transporting and installing them in the surrounding villages as necessary.

One of the tasks we continuously carry out is to ensure the road passability. The roads are presently overloaded given the many various vehicles crossing them and it ensuring their passability is critical for the organisation and delivery of necessary assistance for the population and of the delivery of construction materials for the repair of the housing facilities.

The military system is stable and reliable, with precisely outlined tasks and responsibilities. The system is manned by people and people have emotions. Members of the Croatian Armed Forces were in distress too, some saw their homes demolished and family members in peril.  How does the military system deal with the problems of the kind, despite excellent trainedness, organisation and efficiency?

We all have our emotional side, which cannot be ignored.  Still, we are professionals and have been trained and prepared for such situations, and the armed forces have coped well with the stress the members have been exposed to. Emotions cannot be put aside and always leave impact on everyone. In that sense we engaged psychological teams on the day 1 of the earthquake, who talked to all personnel engaged in interventions. The assistance is still available, and has positive effect for the psychological stability of assistance providers.

Two weeks have passed since the earthquake in Petrinja. What are the following tasks for the Croatian Armed Forces? What can we plan for the upcoming period?

We are staying here until the situation stabilises and the living conditions for the entire population in the area are restored. The Croatian Army will continue to provide assistance to the population at all times. The container homes and mobile homes have arrived from various donators so we shall continue to provide support transporting them and deployment as well as in the construction of container settlements. We have started preparing the terrain for the construction of a container settlement with 100 containers in Petrinja, and with another settlement to be built in Glina, where we shall engage our forces too.

The other activity we have been performing here since the first day and until necessary given its importance is the assistance to the Red Cross with unloading, sorting and, most importantly, distributing humanitarian aid to the people affected by the earthquake. In addition to these primary tasks, we are also taking care of the people who have lost their homes to the earthquake. In the time ahead we shall provide support to the civilian community by removing the damaged facilities that are threat to safety. The military will be engaged in removing the buildings earmarked for demolition.